Star Wars Battlefront is one gorgeous looking game, and based on its recent Beta test, it's one amazingly optimized title as well, offering great performance on both the PlayStation 4 and Xbox One, as well as on a variety of computer setups, catering to all PC gamers. The implementation of photogrammetry and some advanced lighting techniques with the great capabilities of the Frostbite 3 engine have enabled DICE to capture the look and feel of the Star Wars universe, better than ever before in the videogame medium. 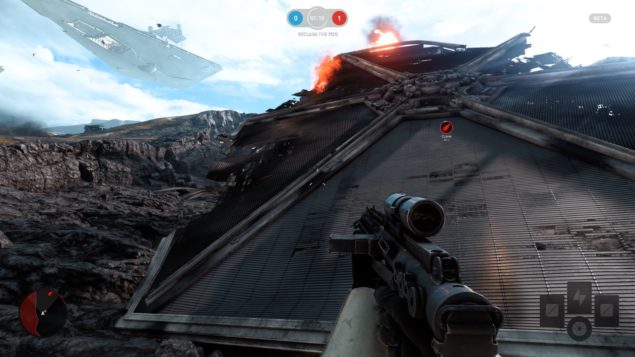 Today EA and DICE have revealed three new hero characters for Star Wars Battlefront, Han Solo, Leia Organa and Emperor Palpatine. The new character models look absolutely gorgeous and can be viewed in the gallery below with their description further down.

The description of the characters as it appears on the PlayStation Blog can be viewed below:

Leia is a character that succeeds through her fearless, strategic mind. We can all remember moments when her quick-thinking blaster fire helped the Rebels out of trouble. Our goal for all the Hero characters has been to capture their essence and spirit from the original Star Wars film trilogy, and then convey that through gameplay. Doing that is more straightforward with characters wielding Lightsabers and Force abilities; it’s obvious how to build gameplay around those things. Leia was trickier in that regard since she doesn’t have a specific, favorite weapon, so we had to represent her in another way.

It’s clear that Leia is a leader, so in Star Wars Battlefront she’s very much about support play, buffing team members, and holding positions. Furthermore, players spawning close to her will spawn as Alderaan Honor Guards. That said, she’s got a lot of offensive output as well. Just look at the original Star Wars trilogy: you’ll notice that when Leia shoots at stormtroopers, she kills them quickly. We’ve based one of Leia’s abilities on this: Trooper Bane.

A hard-hitting, boosted blaster shot, Trooper Bane is designed to be fired in single bursts. Now, this packs a real punch if you hit your target. A stormtrooper will get killed in one blast by Trooper Bane, and against Villains it will both deal a lot of damage and temporarily stun them.

A more defensive power is the Enhanced Squad Shield. This works like the regular Squad Shield Power Card but is far stronger: it can stop some Force abilities and Leia can even shoot out of it with Trooper Bane active, which ground troopers cannot. The Enhanced Squad Shield is ideal if you want to own a certain area of the map, such as an Uplink Station in Walker Assault. Simply deploy the shield and you can securely hold these key areas as a group thanks to Leia’s cover.

Then there’s Supply Drop, another power that will make Leia a key asset for Rebel forces. Activate this ability to drop a variety of power ups for ground troopers, or health boosts for other Hero characters. This can really help your team out, so make sure to use it as often as you can.

It’s been incredibly fun to work on Han Solo for Star WarsBattlefront. He’s such a likeable character, and turning his unique persona into gameplay features is a thrill when you’re a Star Warsfan. We’ve also witnessed the love for this character in our playtests. Han’s sardonic lines and emotes seem to put a smile on everyone’s face.

Gameplay-wise, Han Solo is a gunslinger mainly designed for lone wolves and, echoing the beginning of the original Star Wars trilogy, he’s not very dependent on others. Similar to a Rebel trooper, but with a greatly boosted arsenal, Han Solo might be the easiest Hero character to get into. Offensive output, damage, and mobility — that’s what this guy’s about.

Han Solo has three useful abilities to even out the odds fighting the Empire and the first one is called Rapid Fire. Active for a few seconds, this lets Han fire his Blaster as fast you can pull the trigger, without having to worry about overheating. Try this out when taking on compact groups and mow down those stormtroopers! Rapid Fire is also really good for when villains like Darth Vader approach. Use it at the right time and you’ll lay down a ton of damage.

Han Solo has an element of fortune around him and that’s where Lucky Shot, Han’s second power, originates from. This is a “build up and release” power that hits really hard and is effective against vehicles. Lucky Shot works for infantry as well and is mighty enough to break Darth Vader’s block.

Last but not least is the Shoulder Charge power. Remember the Star Wars: Episode IV: A New Hope scene where Han charges into a group of stormtroopers? Then you’ll know what to expect. Shoulder Charge is both an offensive and defensive move and can be used to quickly get into battles — but also out of them.

Based on how he’s been characterized and how he plays, Emperor Palpatine might be my personal favorite character in Star Wars Battlefront. But getting to that point has been a challenge.

We wanted many different things with the Emperor. We wanted him to be very mobile, but also about deception and fooling people that he’s fragile and weak. As you’ve seen in the original Star Wars trilogy, Palpatine pretends to be a weak old man, when he in fact is extremely powerful. That two-faced side was something we wanted to convey in gameplay and the Emperor’s abilities.

Palatine’s main attack is the iconic Force Lightning, which does a lot of damage to troops within reach. The lightning also comes in the more powerful Chain Lightning form, which is an area of effect ability dealing damage to enemies around you in all directions.

Another power is called Force Dash and is (pun intended) shocking in another way. When Palpatine activates Force Dash he’ll move extremely fast in his current direction, which can be a real nasty surprise for Rebel soldiers. We’ve seen some players get really startled when they have been aiming down the sights at Palpatine and suddenly see him right up close.

In contrast to these abilities, Palpatine is also the Empire team’s support Villain, capable of providing powerups for others and himself. Thanks to his command of the Empire, Palpatine can use the Imperial Resources ability to hand out power-ups to teammates and health boosts to other Villains.