Below is the Gameplay Screenshot showcasing both the 3rd and 1st person view. 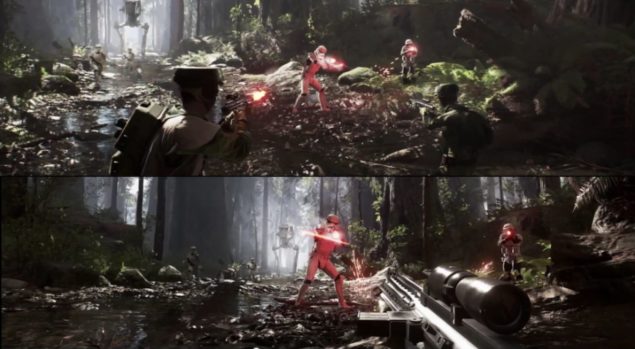 The screenshot seems to indicate that the actual gameplay of Star Wars: Battlefront is as visually  impressive as the reveal trailer

Star Wars: Battlefront has been revealed with an incredible trailer that uses in-game assets, and according to the team at DICE as well as to people who have watched actual gameplay the game graphics look identical to those seen in the trailer. As can be seen in the screenshot above, previous reports were right as the gameplay actually appears quite similar to what we saw in the trailer.

Preorders for Star Wars: Battlefront are available for both the Standard and Deluxe versions. As producer Jesper Nielsen stated, gameplay will come in due time, so it would be safe to assume that these development diaries will lead up to that.

During the Star Wars: Battlefront media briefing at the Star Wars Celebration event, it was revealed that it will be the first game to use Dolby Atmos. Only the PC version of Star Wars : battlefront will support the setting, as the PlayStation 4 and Xbox One versions are not supported. Dolby Atmos was developed in the Dolby Labs and announced back in 2012. It uses 128 audio tracks to create a virtual sound bubble around the listener, immersing them in 3D sound.

PC Gamer talked with DICE producer Craig Mcleod, regarding space battles, to which he explained:

“We’re focusing on epic planetary battles for this game,” he said.

“It’s very important for us to create a true Star Wars environment,”

“We want it to feel real. There are so many different aspects to this. It goes from the ground up, really. So when you think about that initial layer of infantry combat on the ground, then you add ground vehicles and the walker combat on top of that, then you go into another layer of dogfighting between X-Wings and TIE Fighters, and there was a Star Destroyer in the trailer, so yes they do exist within our game. It’s important that you build this in layers so it feels like a real Star Wars environment.”