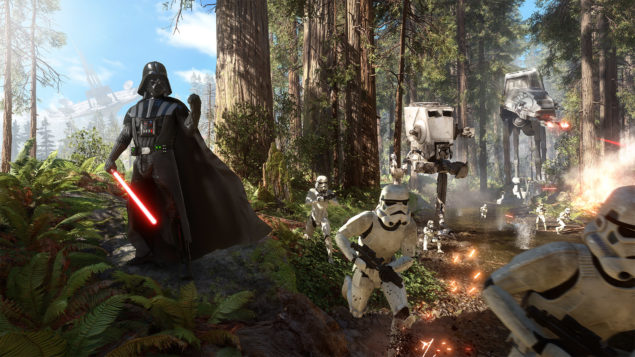 Two days ago DICE officially revealed a new game mode for Star Wars Battlefront. Inspired by Battlefield's Conquest, it's called Supremacy and will host the largest maps in Battlefront. Lead Level Designer Dennis Brännvall talked about the tweaks made on the tried and true formula from Battlefield:

Supremacy is a game mode that will excite fans of the Conquest mode from Battlefield. That said, we’ve made several tweaks to improve the formula. You will always spawn close to the action when you enter Supremacy, so you’ll never feel isolated from the fight. By focusing on one key point at a time, players not playing the objective and camping on a hill somewhere will be a rare sight.

While playing Supremacy you may also control almost all vehicles featured in Star Wars Battlefront, and even Heroes & Villains will be part of the fight, with each character providing unique skills according to Brännvall.

Using a character like Darth Vader to secure control points is great, as he can take increased damage before going down. Luke Skywalker and Boba Fett are great for moving swiftly between attacking and defensive positions, and giving you the edge against opponents in battle.

Star Wars: Battlefront Will Release On November 17 For PC, PlayStation 4 & Xbox One

However, the basic rules outlined for Supremacy in the original blog post turned out to be confusing for fans. As a result, a few hours ago Community Manager Sledgehammer decided to clarify a few points on Reddit.

Hey guys, It seems we may have caused a little confusion around how the Supremacy game mode will work within Star Wars Battlefront. So I would like to clear a few things up.

First off the match base time is 10 minutes and rounds will most likely last longer. Here is some more detail that hopefully clears things up.

The game starts with 2 control points for both teams, with a neutral one to fight over in the middle, with a 10 minute timelimit. Once a control point has been claimed, 1 minute is added to the clock (the exact time is still subject to change). This means that if teams are unbalanced, the game should end fairly quickly. If it’s a tight game, it should go on for longer – until the time runs out due to no control points being captured any longer, or if one team manages to capture all 5.

The added time also ensures that if a team captures a control point with very little time left, the opposing team still has time to recapture a point and keep the game going before we end it.

Sledgehammer also added that player count will be 20vs20, the maximum available in Star Wars Battlefront. The game is set for release on November 17, igniting the Star Wars hype even more (if that's at all possible) before Star Wars VII: The Force Awakens, due in December.

Star Wars Battlefront Benchmarked On Nvidia And AMD, Runs Best On Radeon – Exceptionally Well Optimized Across The Board

EA DICE; Battlefront Much More Emotional And Evocative Than Battlefield