Each week, CIG host a livestream on their Twitch channel where they take questions from the community. Questions are frequent and the chat goes nuts when this happens! Answers which are given on Reverse the ‘Verse are off the cuff and as such usually highly tentative but if you don’t want to take the stuff that gets said here as gospel, there are interesting tidbits that come out. Stuff that gets mentioned on other shows which seem tentative I’ll put into this section too. This month, the key things I caught are:

CIG are currently testing a release candidate for 2.2 build to push it to the live production servers.

CIG are still working internally on the design for ship to ship docking. No clear statements yet on final design but unlikely that every ship will be able to dock with every other ship. Differences between manufacturers and ship sizes likely to impact this with larger ships that have docking rings/airlocks likely to have some kind of unifying docking tunnel.

The Star Citizen HOTAS is still going ahead, despite Madcatz massive restructuring so it’s not in danger. 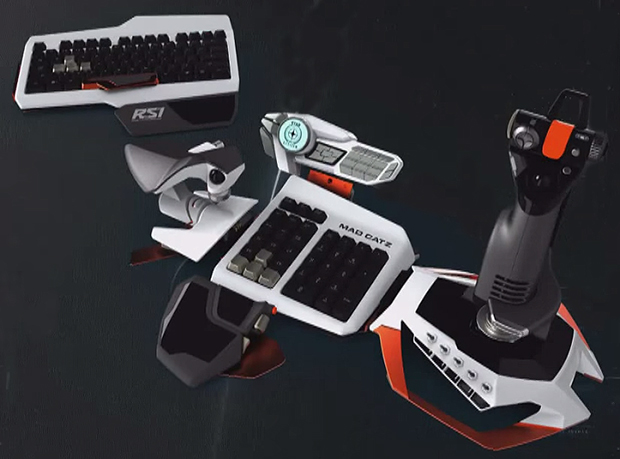 The Star Citizen HOTAS Mock Up

CR mentioned on 10ftcm that 2.3 and 2.4 will likely further flesh out the Stanton system (of which the baby PU of Crusader is a part) with more landing zones and areas etc. Core gameplay to be fleshed out primarily in the PU. Both AC and SM will continue for honing combat skills without death penalties.

Improved item system may come in 2.3 or 2.4 which will contextualise the existing generic “Use” function. This is currently being worked on.

The Next Great Star Marine is coming SOON™! Sounds like they’ll be asking for initial submissions of a helmet!

Mining and salvaging are the designs currently being worked on from a mechanics perspective. Mining is likely to be the next big design post they publish.

Mention in the monthly report of the “True Friends System” which work is starting for. Exactly what this is isn’t yet clear. Personal completely unfounded speculation? Maybe some way of attempting to identify friendlies/hostiles on radar when they are players and intentions obviously unknown? We’ll see.

The new Corvette has started to be worked on! It will be manufactured by RSI (one of the in game ship builders and thankfully not yet another Aegis ship!) and an initial working name is “Polaris”.

CitizenCon this year will take place in LA again on the 9th of October.