Star Citizen Will Be Around 100GB in Size, Major Patches Close to 20GB

I don't want to build a game. I want to build a universe. - Chris Roberts
From the mind of Chris Roberts, acclaimed creator of Wing Commander and Freelancer, comes STAR CITIZEN. 100% crowd funded, Star Citizen aims to create a living, breathing science fiction universe with unparalleled immersion… and you’re invited to follow every step of development! More than a space combat sim, more than a first person shooter and more than an MMO: Star Citizen is the First Person Universe that will allow for unlimited gameplay. 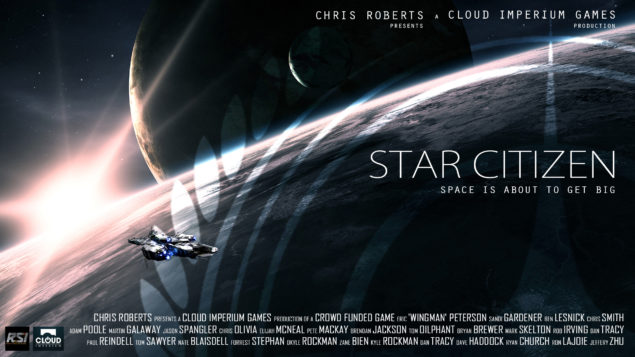 Star Citizen will be around 100GB in size

Star Citizen's director of game operations, Jeremy Masker, revealed that the Star Citizen's client size will be around 100GB and that patches may weight over 20GB.

Jeremy Masker wrote on the game’s official forums when a fan suggested that the game’s client size would be around 30-40GB:

“As I have already said, I would not count on this. The game compression and asset removal is unlikely to yield such high gains that we will be able to reduce our client size to 30-40gb. The size and number of assets that are left to deliver means that our client size is much more likely to be 100gb.”

Masker continued to clarify that while Cloud Imperium is optimizing game patching, some might be over 20GB in size,

“Also, yes we are optimizing game patching for speed and to only deliver diffs, but this is unlikely to reduce actual patch size. Again, each patch has 100s of assets, each of these assets are at times 200mb, this leads to 2-6gb patches, and if we end up doing a file type re-factor and have to re-download 30-40% of the assets on the hard-drive, then the patch will be 14-20gb.”

Star Citizen is already the most successful crowdfunding project of any kind, in history.

That might not seem like much for those with fast connections and unlimited data, but it will certainly prove troublesome to those that don't meet these requirements. Regardless, Star Citizen is a massive game and many users are already upgrading to enjoy it at its fullest. Time to start upgrading both in hardware as well as services. Star Citizen is already the most successful crowdfunding project of any kind, in history.

Star Citizen is currently stated for a 2016 commercial release. We will bring you any more information on Star Citizen, as soon as it becomes available. You can read more on Star Citizen in our recent coverage here and here.