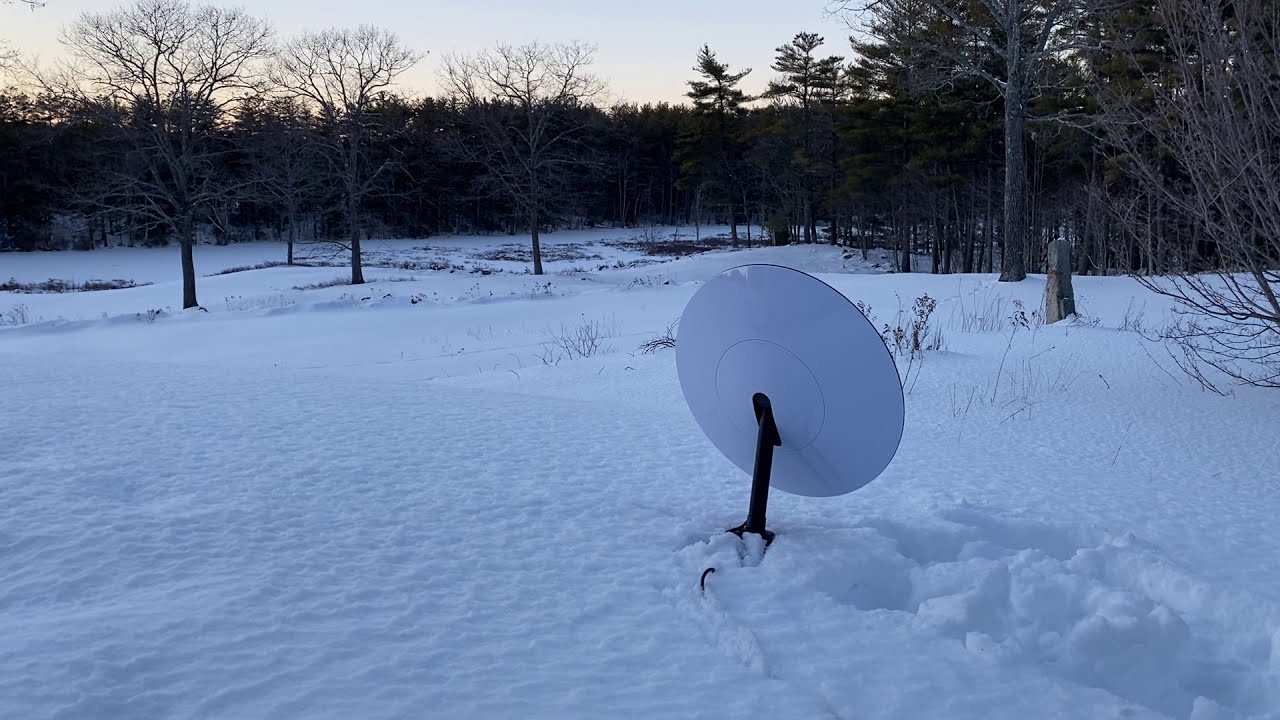 SpaceX's bid to further modify its Starlink satellite internet constellation ran into fresh opposition after the company shared confidential constellation data with DISH Corporation. Dish, whose consumer terminals use the same frequencies as SpaceX's Starlink user terminals, has previously claimed to the Federal Communications Commission (FCC) that the satellite internet service will create interference with its services.

After SpaceX shared its data, DISH contracted engineering consulting firm Telecom Strategies LLC to conduct an interference analysis based on the data of the modification request and submitted the findings to the FCC. These findings show that if SpaceX were to deviate from its plans for Starlink, then the service will create interference with DISH's consumers. However, if it doesn't, then there will be no interference -  a statement that SpaceX has made before the Commission prior to the study that was made publicly available on Tuesday.

The primary point of contention between the two companies is the 12GHz frequency band which right now is divided among Non-Geostationary Fixed Satellite Service (NGSO FSS) providers, Multi-Channel Video and Data Distribution (MVDDS) providers and Dish Based Service (DBS) providers. Of the three, the MVDDS and DBS companies have claimed to the FCC that it is technically possible to share spectrum, and also highlighted to the Commission that while previously, sharing between MVDDS and NGSO FSS was not possible, recent technical advances have changed this fact.

Telecom Strategies's analysis submitted by DISH leverages on one key assumption, as also admitted by Dish in its Ex Parte filing to the FCC. SpaceX, in its submissions to the FCC, has stated that it intends to use only one frequency beam in one frequency channel for serving its users in one geographical area - a parameter referred to as Nco. According to SpaceX, since Nco will have a value of 1, there will be no interference to Dish adjacent terminals. 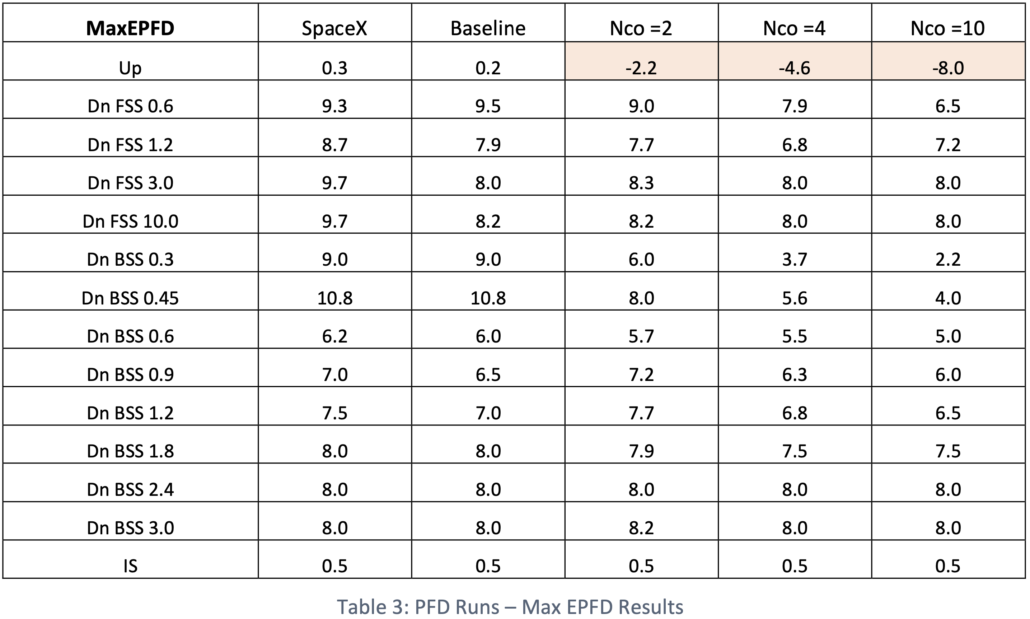 DISH however disagrees with SpaceX's claim of using only one frequency beam. According to the company, other NGSO applicants' systems have different Nco readings. It quotes Kepler's 2016 submission to the FCC which had a value of 4, New Satellite System's value of 3 and OneWeb's value of 40 to state that, "SpaceX’s Nco would realistically be as high as ten or more," a conclusion strengthened by DISH's second assumption that, "if SpaceX requires additional capacity to serve a given area, which seems likely".

DISH uses Telecom's belief that at a given time, no more than ten users will be using the single beam. Since a Starlink beam with 240MHz bandwidth can support user traffic ranging between 200 Mbps to 300 Mbps, if ten users are using the beam at a single time, then each will get a maximum throughput of 30 Mbps. According to Telecom, the single beam is unlikely to support more than ten users, and in the event user count goes up to 50 or 100, or in the thousands, if the area in question is a busy port or a rural area in Utah, the number of users seeking access to this beam would be in the thousands.

In such an event, the consulting firm believes that,

SpaceX would have the technical ability, and would likely not refuse, to serve these users, without sacrificing quality of service, by simply overlapping another beam from another satellite. In fact, the demand may require the addition of many such beams, and there will be a high likelihood that several of these additional beams would be co-frequency to the original serving beam, thus Nco would no longer be constrained to one, but could be much higher. A remote town with no terrestrial infrastructure but with thousands of inhabitants, would likely require much more capacity that can be delivered with one or even a few SpaceX beams. This would justify the use of multiple co-frequency satellites to provide service to such concentrations of population, and thus SpaceX’s assertion that Nco = 1 becomes unrealistic. 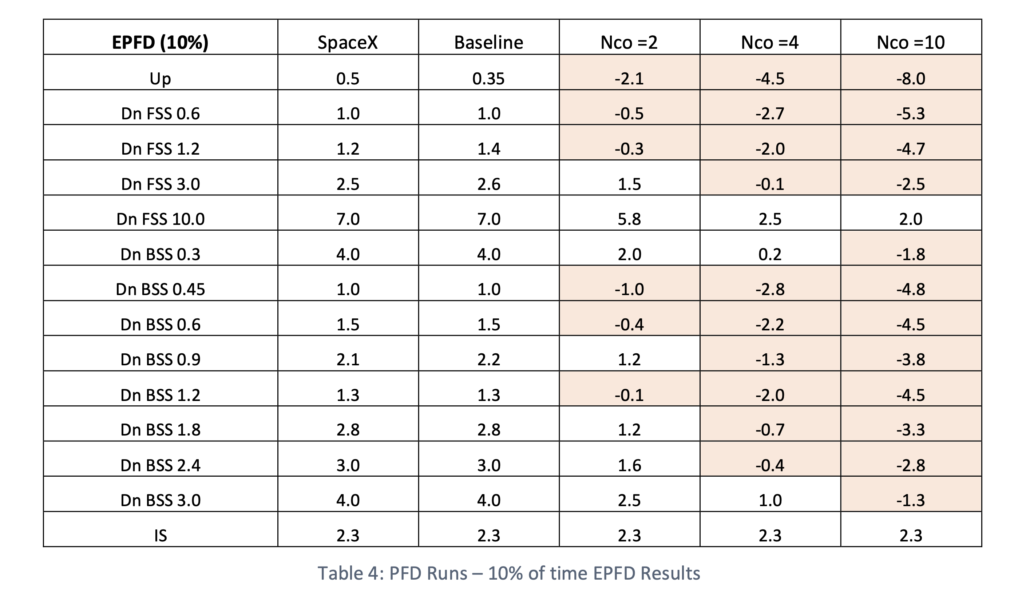 An excerpt from Telecom's report showing interference levels that would exceed the beeping for more than 10% of the time for dishes of varying sizes. According to Telecom, "this is a useful metric as this is the time percentage that roughly corresponds to a long-term event, i.e., the EPFD levels exceeded for more than 10% of time may cause link margin reduction in the GSO link and can be used to estimate the link availability reduction due to NGSO interference." Image: DISH Ex Parte Presentation, IBFS File No. SAT- MOD20200417-00037; Call Signs: S2983 and S3018; Expanding Flexible Use of the 12.2-12.7 GHz Band, WT Docket No. 20-443 submitted on February 16, 2021

Using these arguments, DISH requests the Commission to delay granting SpaceX's request for the third Starlink modification until the body has established new rules for sharing the 12GHz spectrum. These rules, if DISH were to have its way, would relegate Starlink user terminals to other spectra entirely, stripping away the preferred access that NGSO FSS providers have under the current rules.

In short, the good folks over at DISH are certain that SpaceX is likely to use more than one beam for Starlink users in case of user congestion, and should it do so, then the potential for interference to DISH terminals located in rural areas or busy ports will witness significant interference. This interference will be dependant on the number of beams that SpaceX chooses to use - yet, if the Hawthorne, California-based launched service provider's internet division uses multiple satellites to beam a single beam, these concerns might be allayed. This latter bit is of course our opinion, and can change should more technical details are available.

DISH's report also notes that in case Nco is 1, then the interference figures calculated by Telecom are similar to the ones that SpaceX has already submitted to the FCC. Therefore, by gaining access to SpaceX's confidential data, the company has been able to demonstrate that should SpaceX not follow its operating parameters outlined to the FCC, it will harm DISH's services. Finally, DISH also plans to ask SpaceX for more data to conduct further studies.