South Park: The Fractured But Whole Reserves a Date For Its Return to Casa Bonita 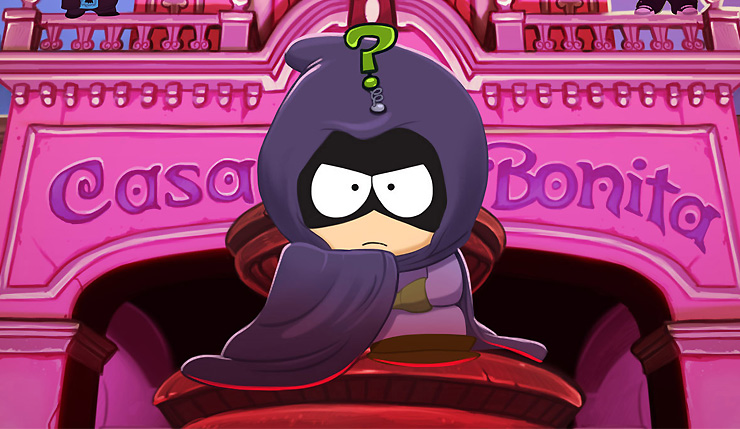 Get ready for a return to the most magical Mexican restaurant in the world, as Ubisoft has announced a date for South Park: The Fractured But Whole’s From Dusk to Casa Bonita DLC. Here’s a quick rundown of what you can expect from the new story expansion:

“Mysterion's sister is in trouble. She's fallen in with the Vamp Kids of South Park, who have descended upon the beloved Casa Bonita. Visit the famous family eatery and explore Black Bart's Cave, watch the cliff divers, taste the magic of Mexico and defeat the brood of Vampires.

Fight darkness with darkness and embrace the new Netherborn class, which features four new occult powers. Dress the part in new Goth costumes and gain some sweet loot. Enter the battle alongside Henrietta, the Goth: a powerful support Witch, and bring your new powers and buddy to the rest of your superhero adventure.”

For those tragically lacking in encyclopedic South Park knowledge, Casa Bonita is the “Disneyland of Mexican restaurants,” and Eric Cartman’s favorite place in the world. The location was the focus of a classic Season 7 episode that many fans (including myself) list as one of their favorites and has been referenced several times since. Getting the chance to visit and explore a virtual Casa Bonita is definitely some grade-A prime South Park fanservice. You can check out a few (tasteful as always) From Dusk to Casa Bonita screenshots, below.

Wccftech’s Kai Powell thought South Park: The Fractured But Whole nailed the look and tone of the TV show, making it a must-play for fans.

“Would I recommend The Fractured but Whole to someone that’s a longtime fan of South Park? Absolutely. The entire town is filled with pop culture references and little winks and nods to even the less notable events in the show’s history. This is South Park at its most crude, yet the make-believe superheroes and roleplaying combat transcend genres to create a masterwork that’s an absolute gas to play.”