South Park: The Fractured but Whole Review – Definitely Not a Stinker

South Park: The Fractured but Whole

Something’s not right in the sleepy little mountain town of South Park. Cats are going missing, drunk citizens are running rampant, and the streets are filled with lava. Well, not *actually* lava but red LEGO bricks, but if you make believe, it’s really the same thing. In South Park: The Fractured but Whole, the scrappy little fourth graders are in the midst of their biggest adventure to date: a game of superheroes with franchise potential, at least according to The Coon. 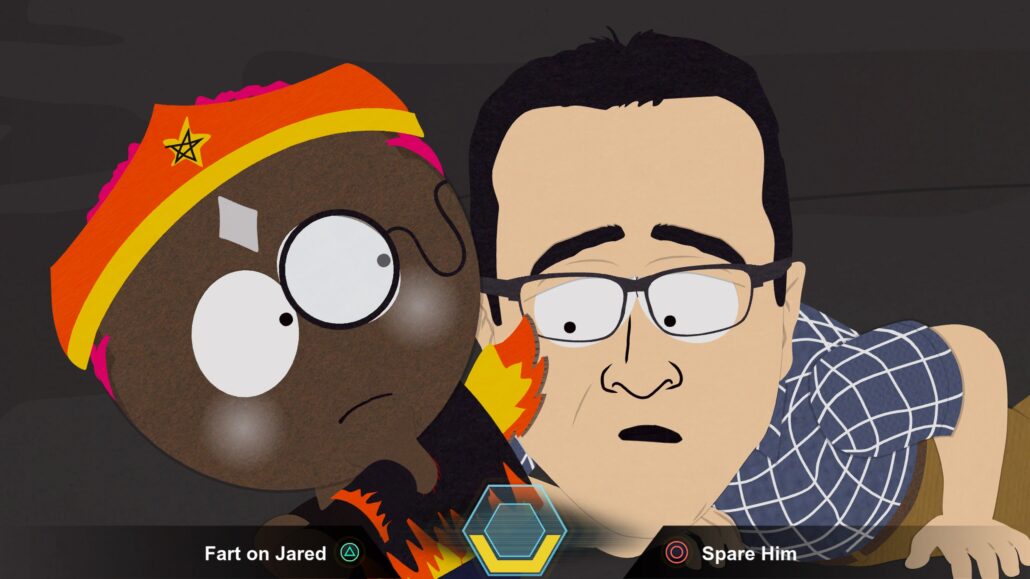 New Kid, Buttlord, or whatever else you want to call them, is the newest addition to the town of South Park. As a new transfer student, you get the opportunity to join in Stan and Kyle’s game of superheroes that are quickly overtaking the city. Both factions of superheroes, Freedom Pals and Coon and Friends, each have their own lofty franchise plans but first, a bit of funding is necessary. A missing cat poster offering a $100 reward acts as the catalyst for the New Kid’s adventures with The Coon and Toolshed (Mintberry Crunch conspicuously MIA).

Drawing upon more inspiration from the series than Cartman’s first game of make-believe, The Stick of Truth, these young superheroes are involved with more topical and vulgar events than perhaps ever in the series’ storied two-decade run. Sure, nothing might top the infamous sex scene from the first South Park RPG, but The Fractured but Whole certainly pushes the limits of what can be considered decent in a video game. Just about anything that can come out of an ass somehow winds up in the player’s hands and can make a mess out of everything. There’s fart gags, poop jokes, adult novelty toys that double as equipable artifacts, and even farts that can rip the fabric of space and time. Expect to see the New Kid’s arsenal of flatulence expand in engrossing ways with the help of Morgan Freeman and his one-of-a-kind tacos. 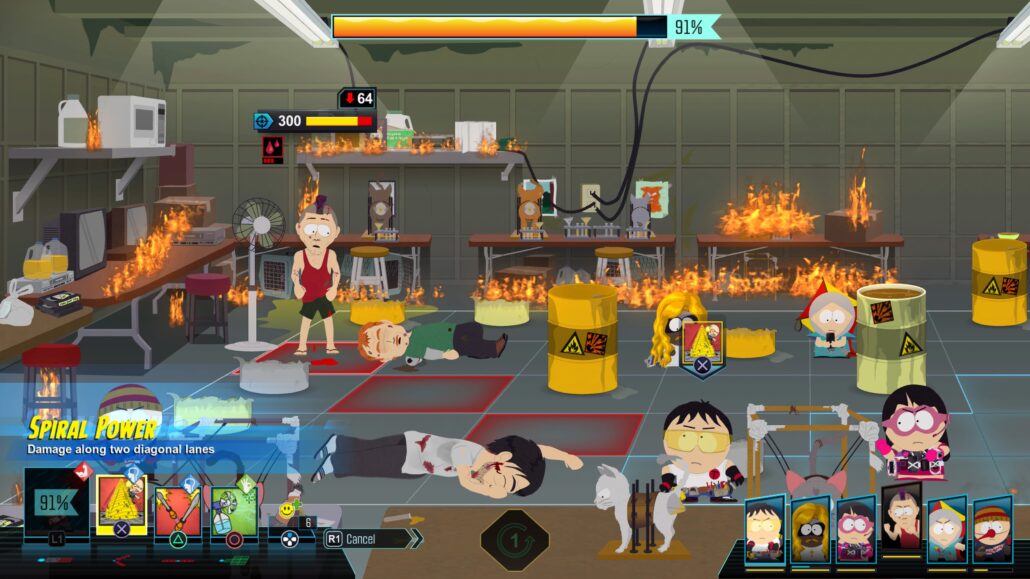 Ubisoft is no stranger to experimental tactics and RPG’s this year, first showing success with the Switch-exclusive Mario and Rabbids: Kingdom Battle. The Fractured but Whole marks a tonal shift from the traditional turn-based combat of South Park’s fantasy adventure by changing the entire battlefield to fit some super-powered combatants. The new grid-based combat allows heroes and villains alike to battle it out freely across a small (typically 30-50 spaces in total, though the arenas can grow for major boss fights) arena with attacks and movement options only covering a few squares at a time. Depending on the class of character (being the new kid, you’re given a unique opportunity to mix classes at Cartman’s discretion), attacks might only target a single square and perform a high amount of damage or perhaps cover a wider horizontal area but instead, apply status effects and reduced damage. Each NPC kid is given three attack slots to work with (with one ultimate attack), but the Buttlord is given free reign to swap abilities around at will between all of their unlocked classes.

Far more important than a solid offense is the necessity for a variety of defensive options in The Fractured but Whole. Most fights will have enemies that outnumber the four-kid teams and when you’re playing on the highest difficulty as I did for my full review, two or three enemies targeting a single team member is enough to take them out in a single turn. That’s where characters like the Human Kite or Toolshed truly shine, as they can provide damage-absorption shields and AoE healing, respectively. Heals are also in no short supply with craftable consumables that are tuned to be greatly available in the town of South Park, just as long as the Buttlord is well-stocked on tortillas. 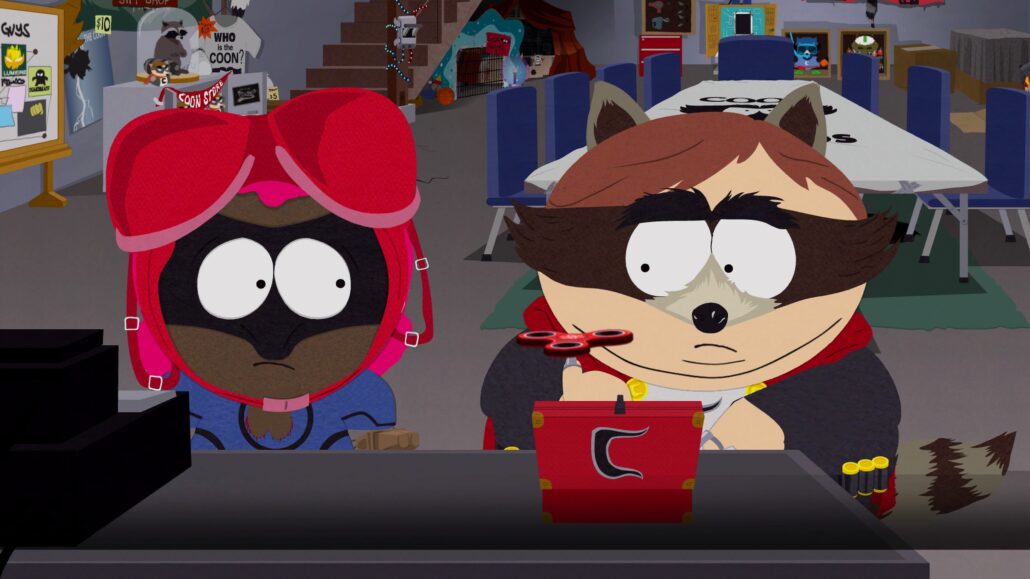 Access to new areas comes at a steady pace in The Fractured but Whole, with each day taking place in its own chapter, culminating with a major event and boss fight during the night. As Buttlord’s arsenal of Timefarts grows, along with his Coonstagram follower count, there’s always a reason to backtrack to previous areas of South Park in search of crafting materials and yaoi pictures, this game’s version of collectible. I spent nearly two hours unsuccessfully scouring the city after the game wrapped up in search of one mission picture of Tweek and Craig and wish there was some sort of gallery to keep track of what’s still to be collected.

South Park: The Fractured but Whole strays pretty far away from the RPG roots of the first title with some sweeping changes to how the New Kid levels up and grows in power. Instead of gaining traditional RPG stats upon leveling up, instead, new artifact slots are unlocked one by one. These various ranks of slots are where the player’s true power, or Might, come from. New artifacts imbue the New Kid with unique abilities, such as increased healing or a higher movement range, so it’s worth sneaking into every house on the block and raid fridges and toilets alike for crafting materials to make these high-powered artifacts (and if you’re a uPlay member, there’s a pretty decent Assassin’s Creed outfit and artifact you can unlock). 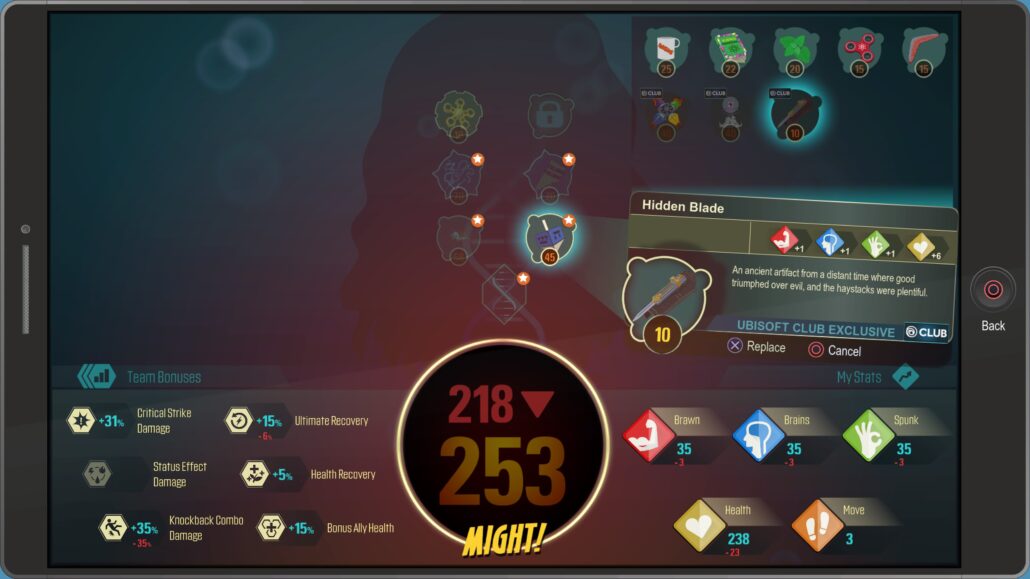 By RPG standards, The Fractured but Whole is a bit on the shorter side but still clocks in around what The Stick of Truth took me for a Platinum trophy. By the time South Park was finally freed from the terrors of villainy, I had spent somewhere between twenty-five and thirty hours to finish nearly every side quest hidden throughout the town. One of the trophies required playing through as a Black Mastermind (Mastermind being the difficulty and race being a character customization perk that shows up partway through the game) that required more time spent grinding up artifact slots and playing much more conservatively. The hardest difficulty feels well-tuned for RPG veterans and would be my preferred recommendation if you’re willing to invest the time to build a heroic team with synergies.

Reviewed on PlayStation 4 (code provided by the publisher). You can buy the game on Amazon.

Much like a shart, The Fractured but Whole continues to surprise as the game of superheroes goes darker and cruder than anything else the kids of South Park have experienced.