Sony Music is being hacked hackers announce it on Twitter

These are some pretty bold hackers, first these guys hack PBS and post a fake news regarding Tupac being found and now they release a tweet saying they are stealing "internal data" from Sony openly on Twitter, the tweet has gotten over 100 (maybe 1000?) retweets already and is catching the attention of sites everywhere. Whether this is an empty threat or whether they really are attacking Sony right now is not verified so far these guys have proven to be a threat by attacking PBS and right now they can further delay Sony's full return by the end of the week if they are indeed doing something serious to Sony.

Someone mentioned this picture of them (lulzsec) being mentioned in the Wall Street Journal: 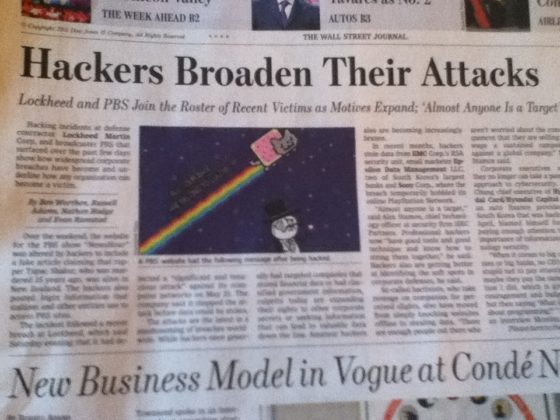 UPDATE: They have just announced that they are going to attack Sony Music i.e Qriocity. So PSN is safe! HERE is a link to the tweet

Sony admits your personal data may not be safe after all