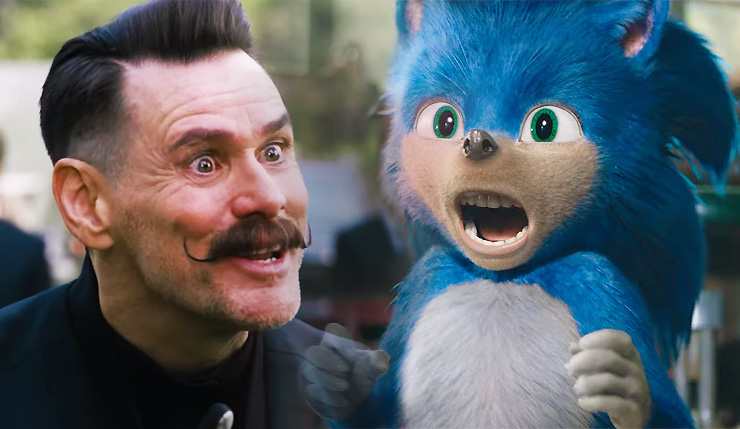 There were certainly plenty of warning signs – those muscular thighs, those creepy eyes – but we now have a full-fledged trailer for the Hollywood live-action Sonic the Hedgehog movie, and yeah, it looks reeeeal bad. Not in an “intentionally quirky and meme-able” way like the Detective Pikachu movie, either. No, this movie just looks straight-up lousy.

Sonic himself comes off even worse than I was expecting, what with his weird gawky proportions and Lovecraftian horror of a face. Also, the motion capture is terrible – it makes Sonic look like he’s just a guy in a fur suit. Is that intentional? I dunno! Also, none of the Jim Carrey stuff is funny, and what relevance does Gangsta's Paradise have to anything happening on screen? I could go on. On the bright side, the “kid in a bag” gag from the end is sorta funny? Anyways, I think I’ve properly prepared you – check out the trailer for yourself, below.

That trailer got you revved up? Need to know more? Come on, play along, I need a few more words for SEO purposes…

Sonic The Hedgehog is a live-action adventure comedy based on the global blockbuster videogame franchise from Sega that centers on the infamously brash bright blue hedgehog. The film follows the (mis)adventures of Sonic as he navigates the complexities of life on Earth with his newfound – human – best friend Tom Wachowski (James Marsden). Sonic and Tom join forces to try and stop the villainous Dr. Robotnik (Jim Carrey) from capturing Sonic and using his immense powers for world domination. The film also stars Tika Sumpter and Ben Schwartz as the voice of Sonic.

Sonic the Hedgehog is scheduled to hit theaters on November 8. What do you think? Be honest! I’ve been hard on the trailer, but hey, if you're into it, more power to ya!