Some users in the UK and US have reported receiving iOS 9 update alerts two days ahead of its scheduled release on Wednesday, September 9. 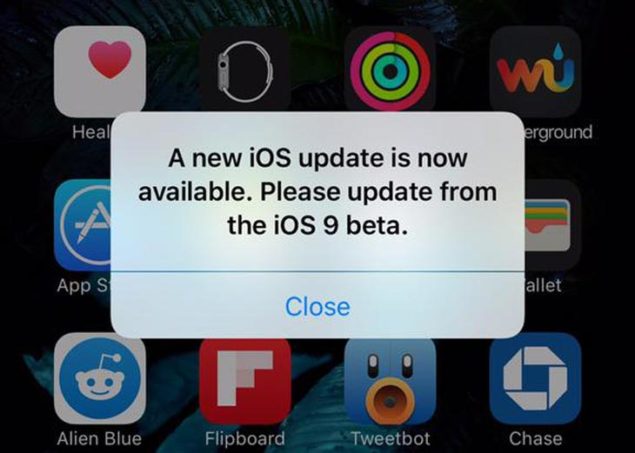 Several developers confirm that Apple has started sending out iOS 9 update alerts to registered developers. iOS 9 Golden Master build will be released to developers on September 9. While many confirm this alert, it seems like a glitch in Apple's servers. Developers have received the same official-looking message that arrives with every new iOS version, "A new iOS update is now available. Please update from the iOS 9 beta." Registered devs have reported receiving this notification on both the iPad and the iPhone and it doesn't appear to be region-specific too.

Apple servers seemed to have sent out the notification to developers in all regions, at the same time. "Those in the UK have received this message on Sept 7, although many developers in the United States saw an upgrade notice on Sept 6, 2015," reports product-reviews. No reason to get excited though, as after receiving this notification, when the developers check for an update to download, there isn't one.

Yep, I got this this morning. No update. Just bug. https://t.co/FahClB5jH0

Apple released iOS 9 beta 5 to registered developers over a month ago and is going to roll out the final build after its "Hey Siri" event on September 9, this Wednesday. While the iOS 9 GM will go live on Wednesday for developers, users will have to wait for another week or two before they could be able to download iOS 9 on their own iPhone, iPad, or iPod touch. If the notification made you think of Apple sending out some surprise releases this time, calm down as it's going to follow the schedule, as planned.

To read about all the products that Apple is expected to showcase this week at the Bill Graham auditorium, read What to Expect from Apple's "Hey Siri, Give Us a Hint" Event.