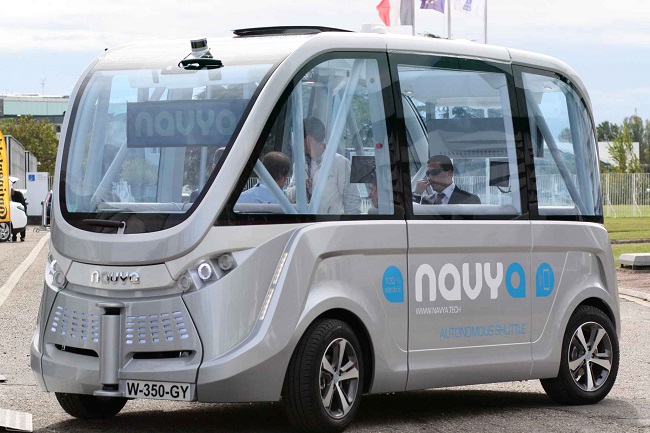 In a major development for the autonomous transportation sphere in Japan, the SoftBank Group (TYO:9984) unveiled its plans on Monday to launch self-driving buses on public roads by April 2020.

According to the details of the plan, a French startup called Navya will provide 11 autonomous buses that do not have any steering wheels. Rather, these buses will be operated by an integrated monitoring software developed in-house by SB Drive – a unit of SoftBank’s mobile subsidiary. The vehicles will be deployed on a 2.5-kilometer stretch of Sakai, a modest town on the precincts of Tokyo, with pre-determined stops at places such as banks and schools.

According to the CEO of SB Drive, the buses will offer practical convenience and may be considered “horizontal elevators” that transport people along a preset route in a recurring manner.

Bear in mind that the Japanese law does not currently allow autonomous vehicles to operate on public roads. However, SoftBank was able to obtain an exemption by modifying Navya’s offerings in accordance with local Japanese regulations. These alterations reportedly include a designated seat for a human crew member who would be able to take control of the bus in the event of an emergency. Consequently, this driver-assisted autonomous project can be classified as a level 2 system upon deployment. It should be noted though that SoftBank believes that it can directly jump to a fully autonomous level 4 system upon the removal of applicable regulatory restrictions.

As a refresher, buses are currently considered the most practical application of autonomous driving technology in Japan due to a severe shortage of drivers and the declining count of passengers heading to remote areas. Nonetheless, this project’s long-term financial viability remains unclear even though the Sakai town plans to allocate a budget of 520 million yen ($4.7million) for the five-year project.

SoftBank’s partnership with Navya underscores its growing ambitions in the autonomous driving sphere. The Japanese giant remains a major backer of Uber (NYSE:UBER) and, by extension, its proprietary self-driving technology. Interestingly, this bet is yet to pay off.

As a refresher, Uber’s share price plunged dramatically after the company’s listing and ended the year down by about 34 percent as investors grew increasingly skeptical regarding the prospects for sustainable profits. Moreover, regulatory challenges and passenger safety issues owing to inadequate background checks of drivers only served to further sour the appetite of investors. Nonetheless, during Uber’s earnings call for the third quarter of 2019, its management assured investors that the company would be able to attain profitability – on an EBITDA basis – by 2021. The announcement seems to have restored at least a modicum of investor confidence in the company. Moreover, investor optimism also seems to be growing vis-à-vis Uber’s autonomous driving technology. As an illustration, the company’s share price has registered year to date gains of 23.74 percent (based on Friday’s close) while the S&P500 has managed gains of only 0.48 percent during the same timeframe.

Argo AI, the technology company that has partnered with Ford Motor Co (NYSE:F) and Volkswagen AG (ETR:VOW3) to deliver a fully integrated self-driving system, is presently banking on a multi-purpose fleet of autonomous automobiles to deliver sustainable profitability that has, so far, remained elusive for the entire industry.

Unlike most of its competitors, Argo is not trying to build automated taxis. Instead, the company has entered into a unique revenue-sharing deal, whereby, it will earn a fee based on the miles traveled by an autonomous fleet equipped with Argo’s technology and owned by Ford and Volkswagen (VW).

Similarly, Google-backed Waymo (NASDAQ:GOOGL) is also working to adapt its autonomous driving technology for commercial vehicles such as the class 8 trucks, according to Waymo Chief Executive John Krafcik.

Interestingly, investors currently assign Argo a lower valuation than that of some of its rivals. As an illustration, Waymo is presently valued at $105 billion while Cruise was valued at $19 billion during its last funding round. On the other hand, Argo’s valuation is estimated at $7.25 billion following Volkswagen’s $1.9 billion investment.