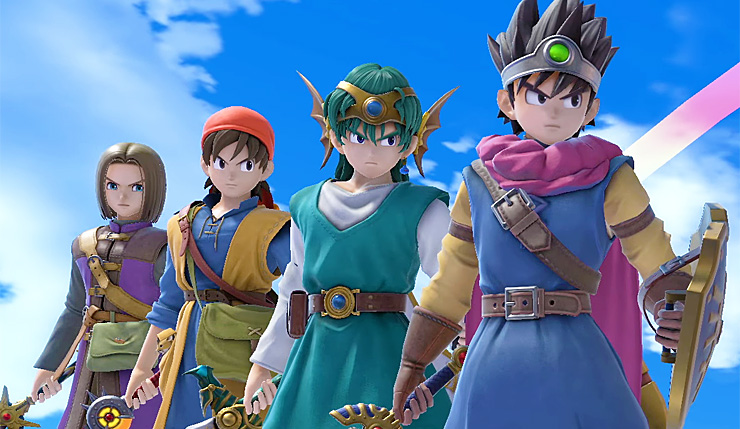 After a week of rumors and speculation, Nintendo has officially announced Super Smash Bros. Ultimate version 4.0, which includes the new Dragon Quest Hero fighter and a few other key additions, will drop sometime today (June 30). The update was accompanied by a full 20-minute-plus Nintendo Direct, which you can scope out below.

As you can see, Hero is actually several heroes in one, featuring skins of the protagonists from Dragon Quest III, Dragon Quest IV, Dragon Quest XIII, and Dragon Quest XI. The Hero can command a large variety of different spells from the Dragon Quest series, with his down special bringing up a Command Selection menu filled with randomized spells. Overall, it looks like Hero will be a fairly complex character to use.

In addition to the new fighter, a new Dragon Quest stage called Yggdrasil’s Altar and a half-dozen favorite songs from the series are on the way. All the new Dragon Quest goodies are available as part of the $25 Smash Ultimate Fighters Pass or can be purchased as a standalone pack for $6. The Fighters Pass will include five updates, with a Banjo-Kazooie update coming this Fall.

For those who don’t want to pony up for DLC, the 4.0 update does include some free additions, including a new online tournament mode. Other changes include a “very easy” difficulty for the World of Light adventure mode, and a new time-limit for unleashing Smash Attacks. It should also be noted that replays created prior to Smash Ultimate version 3.10 will no longer be compatible following the update to 4.0. Of course, this latest update also includes the usual round of fighter tweaks and balance changes, but Nintendo has yet to release full patch notes.

Super Smash Bros. Ultimate is available now on Nintendo Switch. What do you think of the new fighter? Eager to give Hero a try, or is he not your cup of tea?