Skype is one of the most widely used services for voice and video calls. It was acquired by Microsoft for a hefty sum and has continued to improve after that. Today a new Skype for Windows Phone 8 update was released which brings HD video support. High end Windows Phone 8 users will now be able to make high definition video calls straight from their smartphones. 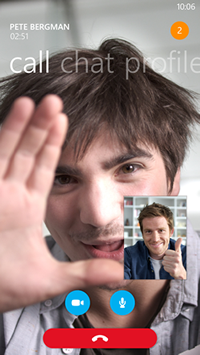 Today's Skype for Windows Phone 8 brings the version number up to 2.4. It enables video calling in high definition by capitalizing on hardware acceleration in the OS. Though only compatible with high end devices, Skype says that users on devices such as the Nokia Lumia 920, Samsung Ativ S and HTC 8X will be able to video chat in 720p. Low and mid range devices will offer VGA video.

Across all devices the new Skype for Windows Phone 8 will automatically select video quality based on the internet connection. So HD video calls might not be possible even on high end devices if the internet connection is not strong enough. Video calls can be made in either portrait or landscape mode and both cameras can be used. This is all stuff that is standard across all Skype apps.

Another interesting update that the new Skype for Windows Phone 8 app brings is that the Skype contacts now show up in Windows Phone People Hub. Users can initiate Skype calls from there without having to launch the app. There's also the ability to switch between multiple Skype accounts. Apart from all this, various safety, performance and stability improvements have been made.

The new app is now available for download from the Marketplace.