Sinner: Sacrifice for Redemption Devs ‘Pleased’ With Their Take on the Souls Genre 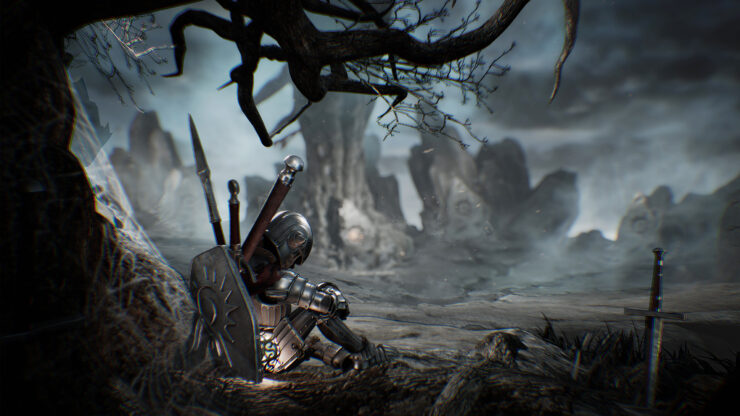 Fans of the hardcore action RPG subgenre made popular by From Software are going to have a happy couple months ahead of them. The main course will obviously be Dark Souls Remastered, launching on May 25th with an additional Nintendo Switch port, but there's also an indie title clearly made of the same mold coming out soon.

It's SINNER: Sacrifice for Redemption, developed by Chinese studio DARK STAR and published by Another Indie. DARK STAR is composed of seven veterans who've worked in the games industry on triple-A games from companies like Ubisoft, Blizzard and Konami before joining forces to go independent.

Dave played a preview build earlier this year and was positively impressed with it, so we arranged an interview with the game's producer Wang Chen to uncover more on your behalf. SINNER: Sacrifice for Redemption is due to release for PC, PlayStation 4 and Xbox One; you can check out the official system requirements on the game's Steam page.

Without spoiling too much, is there anything you can tell us about Adam, the main character in SINNER: Sacrifice for Redemption?

Adam’s past is the foundation of SINNER. Although the player won’t witness and engage with the actions that are the cause of his fall, they will hear of his deeds from the beings they fight. Adam’s story is shrouded in mystery but what is clear is that he has done terrible things, both on purpose and through negligence and has finally come to atone for his Sins. The more intrepid players may be able to uncover Adam’s full story how his fate is intertwined with the world of SINNER.

He looks very much unlike the usual action hero. What was the inspiration for making Adam so small, and how does that relate to the 'level-down' feature?

The idea of Adam’s features was to emphasize his weakness and frailty and also draw attention to his child-like innocence and other childlike attributes. It’s tough to be too specific without giving too much away. For us, Adam is very much like a child, and the quest for redemption is about him maturing.

From a gameplay perspective, it's hard to not see the influence of the Souls games made by From Software in SINNER: Sacrifice for Redemption. Can you discuss that a bit? Also, are there any influences from the bullet genre?

Souls games were a massive inspiration and we are pleased with our take on the popular genre. There’s not too much Bullet genre inspiration outside of that one boss!

How many weapons will be available in the final game? Will there be various difficulty settings?

There will be a total of five weapons available to players but the vast majority of the game will focus on just the Great Sword and the Sword and Shield. We wanted to make Adam feel limited in his options so the additional weapons are limited to later game content.
Due to SINNER’s level down mechanics, the game is as difficult as you want it to be. There are definitely optimal paths through the game and those that make it more difficult. You can even activate all the sacrifices simultaneously and play through the whole games in your weakest form!

Are you planning to add content after launch such as new bosses? If so, will DLC be paid or free?

Developing SINNER has been thoroughly enjoyable and we would love to bring more content to the game after launch. However, we are currently focused on making the game as polished as possible for its release.

Which engine are you using? Is it in-house? Does it support High Dynamic Range displays (HDR) and if so, on which platforms?

SINNER was developed in Unreal Engine 4 but doesn’t support HDR.

The official PC specs listed on Steam mention that DirectX 12 will be required. Why did you make this choice and what kind of advantages do you expect in terms of performance because of it?

Actually, this was a mistake on the Steam page and we are using DX11.

Will there be specific enhancements for PlayStation 4 Pro and Xbox One X consoles? If so, can you list them for us?

Sony has been very supportive of the developers in China and as a result, we’ve been able to update the PlayStation 4 Pro version to run at a higher framerate with better resolution. The game still looks wonderful on the standard PS4 and Xbox consoles!

Is there any chance you would port the game to the Nintendo Switch, or would that be unfeasible from a technical standpoint?

The Nintendo Switch is a fantastic piece of hardware that our development team loves. We would love to bring SINNER to the Switch’s fast-growing community, but we currently don’t have anything to announce and are focused on creating the best possible experience for PS4, Xbox One, and PC players.