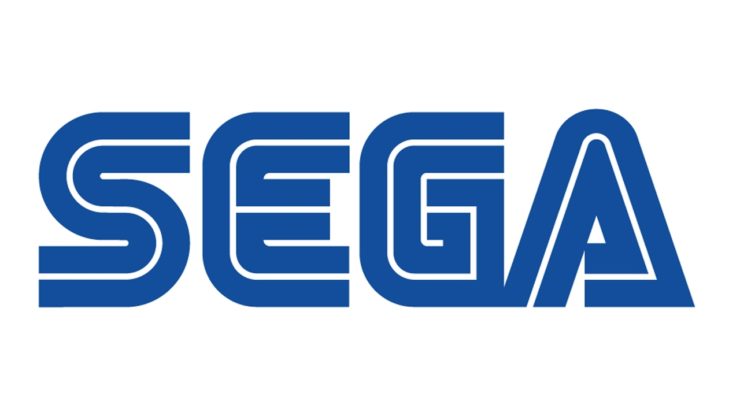 Results show that the six months ending 30th September ¥171 billion of revenue has been brought in, a 12.2% year on year decline from last year’s ¥194.7bn. Operating income has seen an even larger decline, 61.9%, currently showing ¥10.2bn compared to last year’s ¥26.8bn. The shortfall can be attributed to one segment: Pachislot and Pachinko Machines as well as relocation expenses of ¥3.8bn. 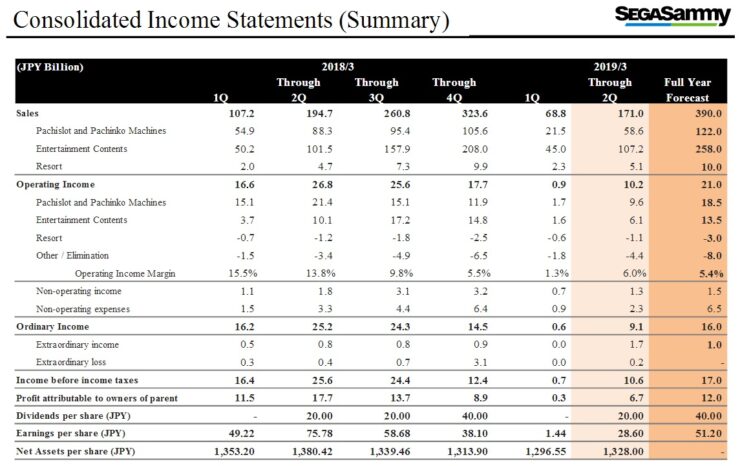 The second quarter has proven to be the start of the predicted resurgence for video games. During the second quarter Sega released Yakuza 0 on the PC, Shenmue I & II remasters on the PlayStation 4, Xbox One and the PC, Yakuza Kiwami II on the PlayStation 4 and Two Point Hospital on the PC. Towards the very end of the second quarter, on September the 25th, Valkyria Chronicles 4 was also released internationally on all consoles and the PC. Border Break, a shooter currently only released in Japan, was singled out as having 'robust' sales.

Further to that, Sega has a few major releases for the remainder of the financial year, as well as two that have already been released. Fist of the North Star: Lost Paradise which was released on the 2nd of October and Football Manager 2019 has been released today. Further afield will see the release of large titles like Total War: Three Kingdoms, Team Sonic Racing and the new IP currently named "Project Judge" by the team that develops the Yakuza series. 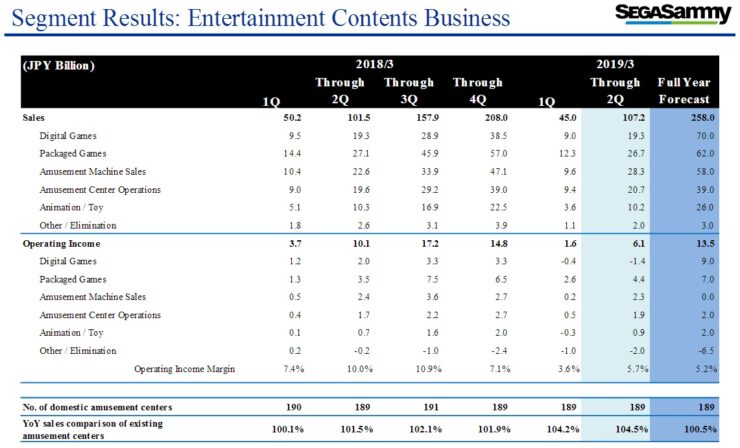 Outside of video games Sega have seen their largest growth in the operations of amusement centres as well as the selling of amusement machines. Combined, these two areas have generated ¥30bn in revenue during the second quarter, far surpassing the first quarters ¥19bn, giving a combined six monthly revenue of ¥49bn. This is a 16% YoY increase on last year’s ¥42.2bn. Sega have this to say regarding amusements:

Expectations are there for the amusement areas to continue performing well thanks to the introduction of new amusement games and a focus on prizes to continue drawing people into centres, to their games and further increase like-for-like sales. 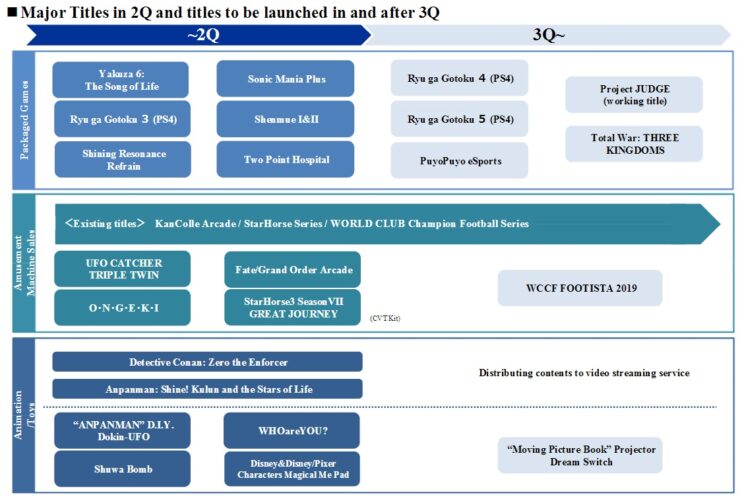 The Failure of Pachinko and Expansion of Resorts

One area where Sega is faltering, compared to Konami (TYO:9766) who have seen a slight resurgence, are pachinko machines. Six monthly revenue from the Pachislot and Pachinko Machines division stands at ¥58.6bn compared to ¥88.3bn last year. The primary cause of this is attributed to the lack of new Pachislot machines.

Expectations are for this to improve over the second half of the year as the introduction of the new generation of machines (No. 6-type machines) has started.

The remaining segment for Sega is Resorts. Resorts have seen a slight expansion in YoY revenue, from ¥4.7bn to ¥5.1bn. Operating income remains at a loss, at ¥-1.1bn compared to last year’s ¥-1.2bn.

Predictions for the current financial year place Sega with revenue of ¥390bn and operating income of ¥21bn. Expectations for Resorts is for revenue to remain flat, but with an increase in operating loss. This will be as a result of further expansions and plans for future venues, particularly the aim of owning and running their own integrated resort in Japan.

The real boosts are predicted to come from the Pachislot and Pachinko Machines, of which the aforementioned No. 6-type machines are expected to be sold alongside "expectations for market
revitalization are heightening". As for the Entertainment segment, the aforementioned high profile games will be joined by a number of other titles, such as Ryu Ga Gotoku Online (Yakuza Online) and a number of smaller titles in Japan as well as a brand new amusement title.

All things considered, Sega appear like they have a busy H2 lined up with high expectations of it being successful. Should things go to the plan, combined with a good reception for their upcoming video games, the year as a high chance of finishing as strong as the company are hoping.