The first quarter for Sega Sammy (TYO:6460) has proven to be a poor one. Their recently published financial results highlight a slump in both sales and profits for the three months ending June 30th.

Specifically, sales have fallen from ¥107.2 billion to ¥68.8bn. This is a 35.8% year-on-year fall, or ¥38.6bn. Income has seen an even more dramatic YOY fall of 94.4%, from ¥16.6bn to just ¥0.9bn. Only one of SEGA's three segments, Resort, has seen a rise in sales. That very same segment did, however, see loss rather than make any profits. The other two segments, Entertainment Consoles & Pachislot and Pachinko Machines have seen varied results.

Pachinko - A Diminishing Division with Potential

However, the company do believe that the division will find itself boosted by the end of the year. In particular, this is through the sales of Pachislot machines made to meet new regulations. These machines are expected to be released in the second half of the current financial year with forecast sales of 103,000 units. In comparison, 83,000 pachislot machines were sold in the previous financial year.

In addition to Pachislot machines that meet new regulations, new Pachinko machines will also be released. These include a sequel to a currently active and successful as well as a new IP. Further afield, should Sega win the license to build an integrated resort, it would give the company an even better place to keep their machines and offer a strong revenue stream. Though this is dependant on winning a license. Even if successful, it will likely be years away from the resort being built.

The company have covered their hopes for the future of the segment, stating:

In the pachislot machine business, although results of compatibility have been received in prototype testing according to the new regulations, the full-scale introduction of machine models conforming to the regulations is expected to be in the second half of the fiscal year or later. In addition, the Group plans to launch new titles using housings manufactured by ZEEG Co. Ltd., a joint venture established with Universal Entertainment Corporation.
In the pachinko machine business, in the current fiscal year, sales are expected to center on machine models which have already been licensed under regulations before the revision. Accordingly, the Group will promote sales of machines including “Pachinko CR Shin Hokuto Muso Chapter 2,” the official successor model to the popular machine “Pachinko CR Shin Hokuto Muso” in operation.

Entertainment Contents is the overarching name for a number of areas within Sega. Amusements, the sales of machines and the operation of amusement arcades are a strong sales generator for the company. During the quarter sales amounted to ¥19bn, a small fall from last years ¥19.4bn. Profits also saw a similar fall from ¥0.9bn to ¥0.7bn. 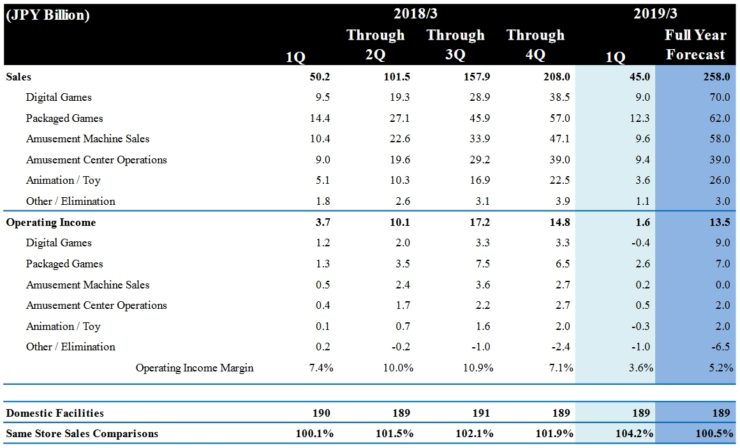 Sega also distributes animations and toys in their local territory of Japan. These include animations such as The Detective Conan: Zero the Enforcer film, which had a box office of ¥8 billion. Toys include the recent award-winning 'Shuwa Bomb Cupcakes Basic set' and a number of licensed products, such as Disney, Peppa Pig and My Little Pony, to name a few.

Sega's Video Games and the Future

Sales of digital and packed titles came to ¥21.3bn, a small fall from last years ¥23.9bn. It should be noted that during the quarter, only a few titles were launched internationally. These include Total War Saga: Thrones of Britannia and the international English release of Yakuza 6.

Sega is expecting a dramatic increase in video game sales within their full year forecast. Particularly with digital game sales. Expectations are for Digital Games revenue to increase from ¥38.5bn last year to a huge ¥70bn this year. Losses from the quarter were ¥0.4bn, reportedly as a result of increased expenditure in research and development.

Upcoming digital games include Idola: Phantasy Star Saga for mobile devices internationally. However, local mobile titles find considerable success including the likes of SEGA Pocket Club Manager and Kotodaman, which the latter has been downloaded over 7 million times. In addition, Football Manager will also likely launch with a mobile version of the title around November this year.

Packaged games also have a huge potential as a result of upcoming releases. The current financial year will see the launch of Total War: Three Kingdoms, Two Point Hospital, Shenmue 1 & 2, Football Manager 2019 and also the English-International launches of titles like Yakuza Kiwami 2, Valkyria Chronicles 4, Fist of the North Star: Lost Paradise, Persona 3: Dancing in Moonlight and Personal 5: Dancing in Starlight.

There's little doubt that the line-up for SEGA is huge this year. Especially when figures show that the international audience dwarfs that in Asia. Combined, Europe and North America saw sales of 5.3 million copies, where Japan and the rest of Asia came to 400,000.

In all, the future for Sega with the number of new titles and machines in video games and amusements will help the company greatly. Outside of Entertainment Contents, the legalisation of gambling could have a positive impact on the companys resort sector as well as the Pachislot and Pachinko segment.