At the end of the first quarter Konami (TYO:9766) revealed that they are expecting a strong financial year. The reasoning behind this is due to an increase in investment in the company's Digital Entertainment (video games) segment. Understandably, this increase in investment hasn't made an impact as of now - though that's is to be expected, it likely won't reap major rewards for a period of time.

This isn't to say that the first half hasn't been decent for the company or, in particular, the second quarter. The current financial report shows that profits have remained flat, generating ¥25.02 billion, a 0.1% year on year increase from last years ¥44.95bn last year. While this may be the case, revenues have risen 5.9% YoY, from last years ¥115.35bn to ¥122.16bn. This indicates that the second quarter saw revenues of around ¥63.6bn with profits of around ¥13.2bn. 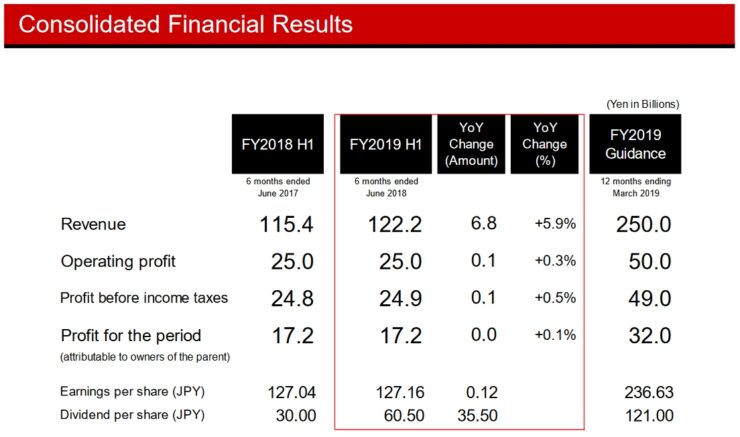 Konami and the Return To Games

This time last year I made the simple observation that Konami was a damaged name to those interested in Video Games. Konami saw a fall in revenue from the Digital Entertainment following their effective retreat from core video games. This fell from ¥115bn in the 2016 financial year, to ¥105bn in 2017. The trend was noticed and a reversal started. The 2018 financial year saw digital entertainment revenues rise to ¥120bn. Currently, for the first half of the 2019 year, revenue for digital entertainment stands at ¥66.8bn.

A renewed push in this sector has led to an increase in releases for both home consoles and mobile devices. During the first half of the year, for the PC and consoles, Konami has released a number of titles including Super Bomberman R, Anubis Zone of the Enders: M∀RS, Castlevania Requiem: Symphony of the Night and Rondo of Blood and Pro Evolution Soccer 2019. At the moment, the only console and PC titles announced for release in the near future are Hyper Sports R globally and Professional Baseball Spirits in their home nation of Japan.

Outside of console and PC games, Konami has seen a much larger increase in mobile titles. Currently, four titles have been released in the first half of the year. Two of these titles were only released to the Chinese market, having been released to the rest of the world prior to now. For the remainder of the financial year, plans are afoot for the launch of Yu-Gi-Oh Duel Links within the Chinese market, as well as three new titles for the mobile market in Japan. 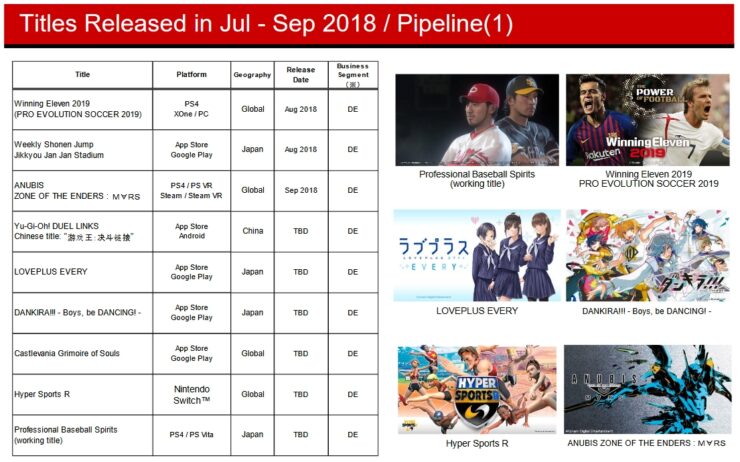 One other area Konami seems to be interested in expanding is with eSports. In particular, the company are expanding with hosting tournaments for Yu-Gi-Oh as well as Pro Evolution Soccer. In the case of Yu-Gi-Oh, Konami is looking to further highlight the game as 2019 will make the 20 year anniversary of the card game.

A Slow Retreat of Amusements?

Whatever the reason may be, the two areas that Konami seemingly abandoned core video games for show mixed performances. This could seem like karmic justice towards fans of Konami's game franchises, though certainly a cause for concern with the company. These two areas are Amusement, as well as Gaming & Systems.

Now, this isn't to say it's a negative throughout, but they are certainly not performing to the standards they could be. Amusement, for example, saw a 9.6% YoY fall in revenue, bringing in ¥11.3bn. Profits in the same segment saw an even greater YoY fall of 33.3%, generating ¥3.1bn profit in total. Konami does believe this could see a turnaround, stating:

There are signs of recovery in the amusement industry market owing to measures taken by the industry as a whole, including increases in users with families at arcade game areas in shopping malls and senior users who play medal games since amusement facilities are becoming more recognized from a wide range of users as a place where anyone can play.

Gaming & Systems, on the other hand, is seeing a resurgence. Revenue has remained relatively flat, generating ¥12.8bn, a 1.2% YoY increase on last years ¥12.6bn. Profits, however, have increased 28.4%, rising from last years ¥1.2bn to ¥1.6bn now. This has been driven by the opening of new casino facilities, as well as integrated resources, giving Konami a larger base that they can sell their machines to. 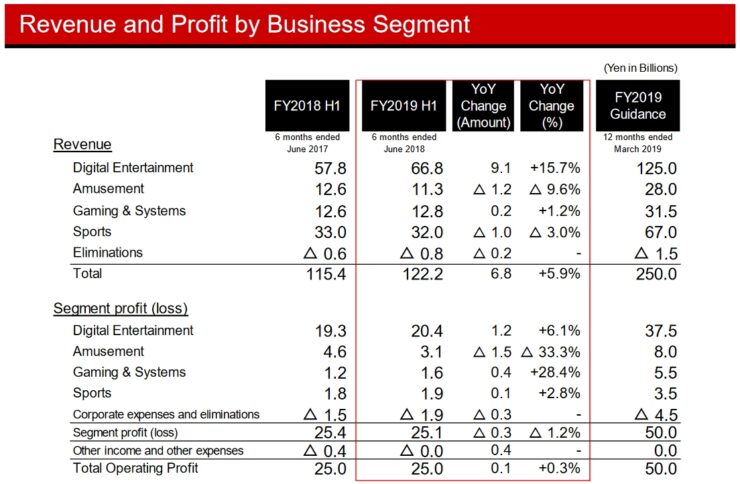 Sports and the Health and Fitness of the Future

One disparate segment of Konami is the newly renamed Sports segment, formerly known as health & fitness. The ¥0.3bn lowering of revenue seen in Q1 has multiplied in Q2. The segment has seen a 3% YoY fall, or ¥1bn, in revenue - bringing in ¥32bn compared to last years ¥33bn. Fortunately, profits haven't been adversely affected, with the second quarter almost matching the first. Profits remain fairly level, coming in at ¥1.9bn compared to last years ¥1.8bn.

This area is likely to see a little stagnation in the close future, with major aims long term. Primarily as Konami are renovating facilities, as well as increasing the quality of machines within the facilities. This should help to draw people into Konami clubs, compared to the competition, but what will also help is the introduction of varied pricing plans which "customers can select based on their frequency of use". This is an important area for Konami to bring around, being the second largest segment for the company.

Much like I have stated earlier and in the past, the earlier and constant investment in video games will prove to be the driving factor for Konami. Should they utilise the wealth of IP's at their disposal, Silent Hill, Metal Gear and Castlevania being prime examples, and develop high-quality titles, there's little doubting that fans would return to these series'. Only time will tell what the publisher has in the pipeline here.

As for other segments, as laws change and establishments open, Gaming & Systems is likely to grow and continue to surpass Amusements. Changes to fitness clubs, as well as the accessibility through varied pricing, also has the chance to draw more people in. The chances are there for Konami the take.