Sea of Thieves Monthly Update Adds the Challenging “Fort of the Damned,” Banjos, and More 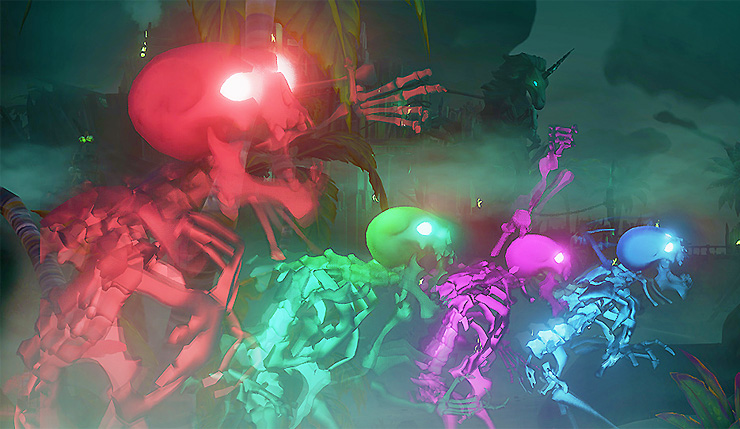 Following a year of bigger, yet less-frequent updates, Sea of Thieves is now focusing on regular, monthly updates. Rare has already brought us the Black Powder and Dark Relics updates, and now players can tackle the Fort of the Damned. The focus of the update is the titular fort, which is protected by special “Shadow of Fate” Skeletons, which can only be defeated with special color-coded lanterns. The update will also include a variety of new pirate duds, many of them best-suited to the lady swashbucklers out there, and a banjo! No, not that Banjo…one you actually play. Check out a trailer for Fort of the Damned, below.

Here’s the full rundown of everything included in Fort of the Damned:

The dead have dug themselves in at Old Boot Fort, now better known as the Fort of the Damned! Using a Ritual Skull and the six coloured lights of the Flames of Fate – obtained by being sent to the Ferry of the Damned in various fatal ways – pirates can wake the Fort and set about sending its sinister skeletal defenders to oblivion. Riches are sure to lie within! Savvy pirates should talk to Stitcher Jim for more information. He’s likely to be found scouting out the Fort from a nearby island.

Attacking the Fort of the Damned won’t be easy, as it’s defended by Shadow of Fate Skeletons – a new kind of Shadow Skeleton whose sole weakness is a matching flame from the Ferry of the Damned! Organisation and co-operation will be vital as pirates form Alliances to combat this epic threat. If you’re short on Ritual Skulls to sacrifice in the Fort, Duke has your back with Voyages that lead to guaranteed Skulls, either from scrapping with skellies or tracking down hidden stashes.

Face Of The Damned

Victory against the daunting Fort of the Damned is rewarded by valuable loot, and you can also earn unique cosmetics to celebrate the Ferryman! Should you or your crew awaken the Fort, you’ll earn face paint reminiscent of the ghostly steersman himself. Awaken and overthrow the Fort 10 times to earn his tattered jacket! Lastly, defeat all six types of Shadow of Fate to earn the Ferryman’s lantern and really complete that ‘tormented gatekeeper’ look.

Banjo In Sea Of Thieves?

Pirates never let a little organised assault by walking skeletons spoil their day! Keep your chin up with a burst of banjo music as this brand new instrument arrives on the Sea of Thieves. This permanent addition to the game will be free for all players and can be selected from the radial just like any other instrument. Find more cosmetics in the Equipment shop and pluck a pleasant tune for your crewmates.

Duo Sloops In The Arena

DeMarco and Lesedi Singh know better than anyone that a duo is a force to be reckoned with, provided no sibling bickering gets in the way. With duo Sloops arriving as a match type in The Arena, well-oiled pirating pairs can do battle with other terrible twins in a fast-paced contest of small, nimble ships. Bring a trusted crewmate or make a new friend in this more personal skirmish!

Skeleton Captains, sick of being targeted by Bounty Voyages, can now appear on any island during everyday exploration! These potentially deadly emergent Captains could spring their ambushes anywhere you go – but there’s good news too, as they may be carrying maps or clues to precious loot (complementing their own precious skulls), turning a lethal encounter into a lucrative prospect. 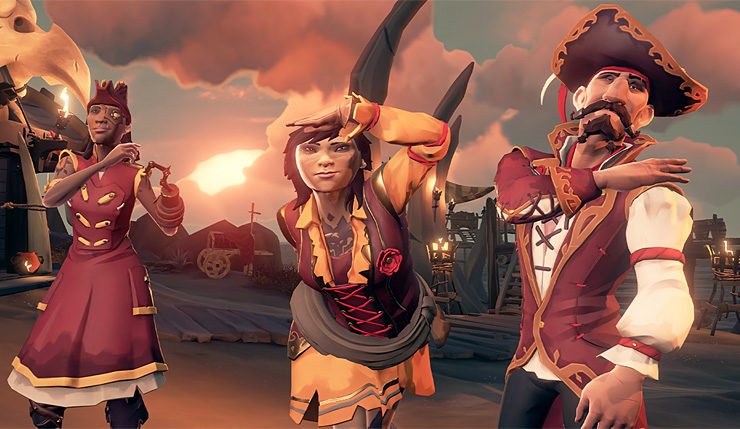 The shopkeepers of the Sea of Thieves are bringing you even more ways to express your inner scallywag. This update introduces a selection of new shirts, skirts, dresses and undergarments for pirates of all genders. Dyes also provide a choice of audacious colours, for hair as well as clothing. All pirates can shop for these, while a special set of two-tone hair dyes is only in stock at the Legendary shop.

Duke is offering time-limited cosmetics from the Wailing Barnacle, Fearless Bone Crusher, Redcoat Executive Admiral, Wild Rose and Deep Ocean Crawler sets. There’s a good mix of clothing, accessories, weapons and items, so pick a set to begin or complete! Remember that Duke’s stock changes each month, so use your gold and Doubloons to secure anything that tickles your fancy while it’s still available.

Sea of Thieves is out now on PC and Xbox One. The Fort of the Damned is available now.