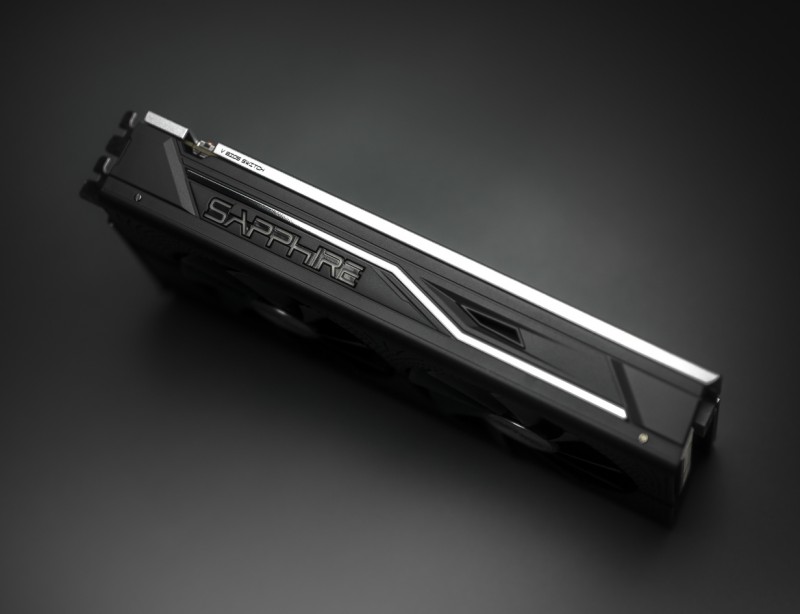 The AMD Radeon RX 480 Sapphire Nitro 8GB OC has been listed by OCUK. A beautiful custom card from sapphire that oozes elegance. This is the first custom RX 480 graphics card that we have seen listed online since the GPU's launch on June 29. It's also one of the very best looking we have seen yet from Sapphire.

The card features the Polaris 10 XT GPU and 8GB of 8Gbps GDDR5 samsumg memory just like the reference 8GB RX 480. However, the card comes with a factory overclock right out of the box and features an 8-pin power connector for additional overclocking headroom.

The inclusion of a 150 watt 8-pin power connector gives the card a substantially more power on tap . As it can draw twice the wattage from the power supply 12v rail compared to the reference design which is configured with a 75 watt 6-pin power connector. Giving the card a total power headroom of 225 watts, PCIe + 8-pin, 75 watts more than the reference design. The card also features a custom printed circuit board which improves on the already head-scratchingly beefy 6+1 phase design of the reference RX 480 which outclasses even the GTX 1080 FE. Sapphire has also employed Diamond chokes to eliminate the potential of any coil whine.

The Sapphire RX 480 Nitro is cooled by the company's brand new dual slot "black dress" design. Which includes a dense, four heatpiped heatsink and two large 100mm removable fans. In terms of aesthetics this is perhaps one the most attractive graphics cards we've seen from Sapphire yet. Featuring a black brushed metal exoskeleton and a gorgeous backplate. The combination of black with an RGB lit Sapphire logo allowing the user to pick any color and set LED modes means this card will look incredibly sharp in any case and in combination with any color scheme.

Sapphire has made a lot of very clever choices here and that clearly extends to the I/O. The card comes with 2x HDMI ports, 2x DisplayPort connections and a DVI-D port as standard. So no matter what the I/O looks like on your monitor you'll be able to run this card right out of the box without any adapters. Sapphire hasn't announced what the core and boost clock speeds for the card are going to be just yet.

However, the company defines the RX 480 8GB OC Nitro as a 175 watt card which is 16.6% higher than the reference design.This hints at a clock speed that's significantly higher. So we're probably looking at the high-end of 1300mhz, 1370-1390Mhz, right out of the box.  AIBs reported earlier this week that their cards can clock to 1480-1600mhz. So we're really excited to see what the RX 480 Nitro can do once we get it in our lab.

The card has been listed online for 249 British Pounds, 20 more than the reference design. This should translate to a $249 dollar MSRP. In exchange for the $20 premium you get an exhaustive list of features that puts this card head and shoulders above the reference design.

overclockers.co.uk
The Sapphire Nitro is not only the first custom RX 480 on the market and Overclockers UK is the first to list this amazing product world wide with 2000 units due to arrive middle to end July. We at OcUK believe the Nitro RX 480 will be our best selling RX 480 simply because it improves every aspect of the RX 480 by being faster, quieter, cooler, better looking, more features and even better the price premium for all these extras is very minimal, making the Sapphire RX 480 Nitro absolute incredible value for money.

According to overclockers.co.uk the RX 480 Nitro OC will launch within the next couple of weeks and they're receiving a delivery of two thousand units. That's twice the number of reference RX 480 cards the e-tailer had at launch. If you've been sitting on your hands over these past few days waiting for custom RX 480 cards to show up then you're in luck. Because looks like Sapphire is going to reward your patience, in a big way.