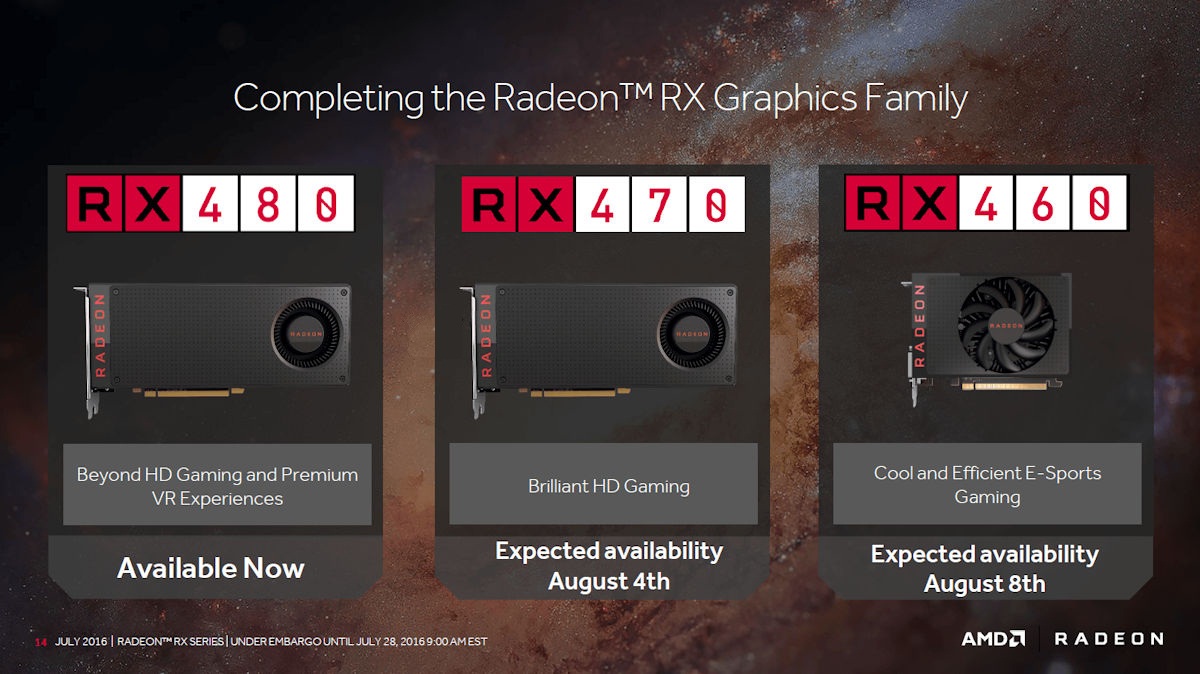 AMD's hotly anticipated RX 470 and RX 460 graphics cards are launching early next month according to leaked press material from the Radeon Technologies Group. The release date has been confirmed to be August 4th for the 470 and August 8th for the 460. The leak also includes details about the hardware specifications of each of the two cards as well as their performance and market positioning compared to their Radeon 200 series predecessors. So let's dig straight in!

The Radeon RX 470 is the second desktop graphics card coming out of the skunkworks of the Radeon Technologies Group that's based on the Polaris 10 GPU. More specifically, Polaris 10 Pro the slightly cut back variant of Polaris 10. The RX 470 is the replacement to the R9 270 with a promised performance improvement of 1.5X to 2.4X depending on the game.

That's a hefty performance uplift, despite the utilization of cut back silicon. Which comes in at just 256 GCN stream processors under its big brother the RX 480 and the full fat Polaris 10 XT GPU which powers it. The Render Output Units stay the same at 32. And the Texture Mapping Units get a proportional cut to the stream processors, down to 128 from 144 in the 480. With 2048 GCN 4.0 cores clocked at 1206Mhz the RX 470 is just a tenth of  a TFLOP per second shy of hitting 5 TFLOPs of peak single precision compute.


The slightly lower compute performance means that the RX 470 is content with slightly slower GDDR5 RAM to feed the chip. So the RX 470 is equpped with 6.6Gbps GDDR5 memory chips vs the 8Gbps chips on the 480.  Running across the same 256bit memory interface this generates 211 GB/s of memory bandwidth, 45 GB/s less than the RX 480.

The RX 460 also features a 128bit memory interface, exactly half that of the Polaris 10 based RX 480 and 470 graphics card. Which makes sense considering that we're talking about less than half the stream processors here. A 128-bit memory interface in the 460's case actually means that each stream processor in the 460 has access to more bandwidth compared to the 470 and per teraflop/s.


Clocked at exactly 1.2Ghz the 460 achieves a peak FP32 performance output of 2.2 TFLOPs. The memory subsystem is based on the aforementioned 128-bit memory interface, connected to four 7Gbps GDDR5 memory chips for a total of 112 GB/s of bandwidth.  The whole package folds in neatly into a frugal <75W TDP. The RX 460 is poised to deliver 20-30% higher framerates than its predecessor the R7 260X across the board and do it while drawing less power too.