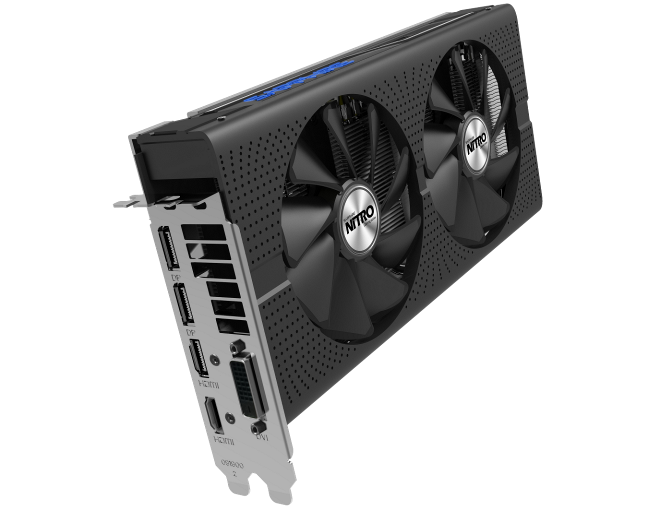 Less than a month ago AMD Radeon launched their newest GPU, the 14nm Polaris based RX 480.  See our review here. But that was just the reference design, and we know how much our readers are looking forward to the aftermarket models.  We've been posting articles featuring various models including XFX, MSI, and Powercolor; but today it's time for Sapphire to get some top billing.  These cards will begin appearing at e-tailers next week, specific dates and times are not available at the publishing of this article. The MSRP for the 4GB is $219 and the 8GB card is $269.

Today, SAPPHIRE has announced their new lineup of Polaris based RX 480 graphics cards.  The NITRO+ Radeon RX 480 and to quote SAPPHIRE this card has "Innovative features and thoughtful design combined with the best value for gamers".  But what are these features, other than they went with a much better looking darker theme than the silver look the early leaks had suggested.

The NITRO+ RX 480 is targeted at, what SAPPHIRE is calling, high-quality 1440p gaming.  While the Reference RX 480 proved that it was capable at 1440p, I can't wait to see what the core clock and cooling improvements lend themselves to under pressure.  The NITRO+ RX 480 8GB version is cranked from the factory to a boost clock of 1342MHz and 8GB of GDDR5 clocked at 2000MHz.  This is good to see since AMD themselves hinted that it might be possible for AIBs to release lower memory clocked 8GB variants.  The 4GB version weighs in at a little less with a factory oc of the core to 1306MHz and the 4GB of GDDR5 being clocked at the reference 1750MHz.

Cool Down You Say?

Cooling is handled by SAPPHIRE's new and improved Dual-X cooling with two 95mm dual-ball bearing fans, with improved fan blades reducing the noise level by 10% when compared to their previous NITRO line.

Along with the redesign of the fans comes SAPPHIRE's new Fan Check, which allows the fans to be user checked via a new SAPPHIRE TriXX 3.0 software, and if there's a problem to contact support immediately.  If the Fan Service finds there to be a problem with the fan they dispatch a new fan to the customer either directly or through a channel partner.  I know what you're thinking, okay I get a new fan? Now what?  Easy, the new fans use their Quick Connect system meaning they're easy to remove, clean, and replace.  There's only one screw and a clip holding the fan in place so it's simple for the user to service rather than suffering down down time entirely while waiting for an RMA over a simple fan failure.  Along with the new design SAPPHIRE has also included their new NITRO CoolTech that allows for the fans to be disabled and go into a 0db state when the core is under 52 degrees Celsius.

If you're surprised by this move by SAPPHIRE, you're not alone.  I personally didn't see this one coming.  SAPPHIRE is equipping the RX 480 with what they're calling NITRO Glow into their shroud design.  The user can adjust the colors of the LEDs either via software using the new SAPPHIRE TriXX 3.0 or through an actual hardware switch, the little red button on the back of the card contains 5 different modes as well as disabling the LEDs if you so choose.

This is the part most of you, including myself are most anxious to see.  The NITRO+ features a dual bios configuration with one having their NITRO Boost.  This mode automatically increases the boost clock and power limit for higher performance (what those values are we don't know yet).  Ditching the 6-pin PCI-e connector the NITRO+ goes all in with an 8-pin PCI-e connector to ensure much better/stable power delivery.  They are using their unique Black Diamond Chokes that are now in their Mark 4 state, further reducing the coil temp by another 15% over previous version.

But, how will all that perform.  Only time will tell, but in the mean time I was able to take my reference RX 480, that was unlocked to the 8GB model, up to 1350MHz on the core an 2250Mhz on the memory and it yielded over 14,000 FireStrike Graphics score.  So we're quite excited to see what this new wave of AIB RX 480s can do, it may be just what the Dr. prescribed.

*but here's the link to the validation*

.....oh, and don't forget about next generation APIs like Vulkan!