Sapphire has displayed its new AMD 990FX based motherboard at Computex 2011 event in Taipei. The motherboard which is named "990FX-N" is part of Sapphire's Pure Black series which consist of high end motherboard built for overclocking and hardware enthusiasts. The motherboard features the AMD 990FX + SB950 chipset along with the AM3+ Black socket which allows support for Bulldozer based Zambezi-FX processors.

The motherboard includes 4 DDR3 memory slots which allow Dual channel memory configurations with rated speed of 1866mhz. A total of Five PCI-e x16 slots (One running at 4x) while 2 Open ended PCI-e x4  slots are included as expansion slots which can allow upto Quad Way Crossfire Support. Although SLI is also supported by the 990FX chip but due to licensing issues, Sapphire refrained from adding it. A total of 8 Sata 6Gbps and 1 E-Sata ports allow storage options while the back panel I/O connectivity ports include 8-channel HD audio with optical and coaxial SPDIF output, dual gigabit Ethernet, two USB 3.0 ports, and Bluetooth.

No details on the PWM and VRM desgin were given away but it is cooled down by two large heatsinks covering the North/South bridges themed in Black and Blue color. Hopefully, Details will emerge as soon as the event starts in a matter of hours. 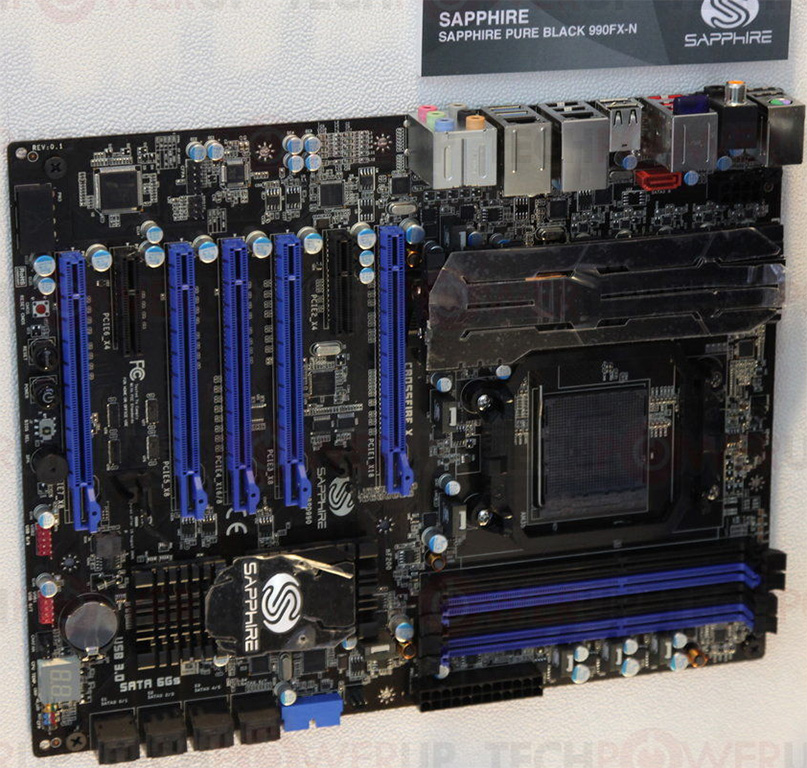 More AMD 990FX based motherboards below: