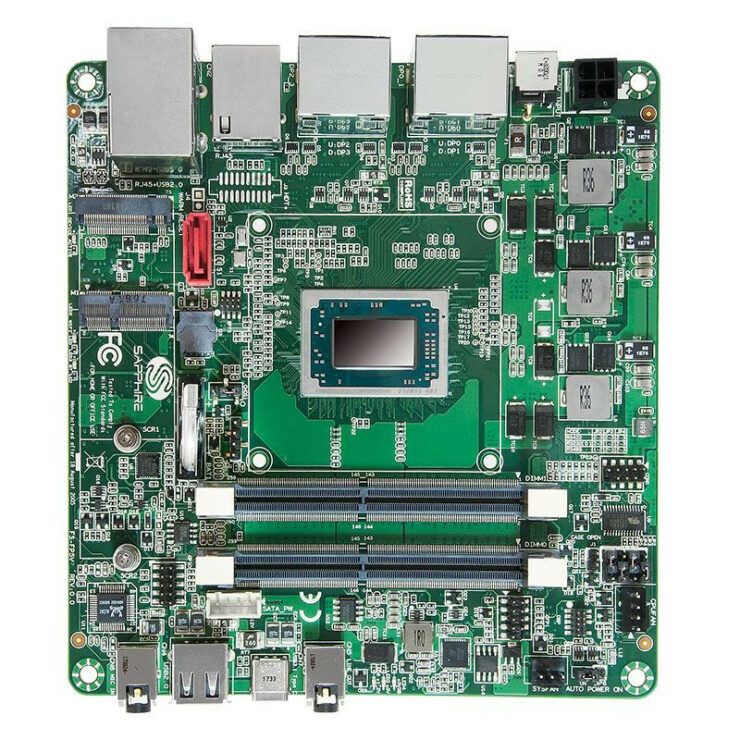 Earlier this week Sapphire, a company well known for their AMD non-reference design graphics card has introduced the FS-FP5V, which is a mini-STX (147.3 mm x 139.7 mm) Small form factor motherboard that is designed for AIO desktops, digital signage boxes, or even low power compact desktops. Powering the whole thing at the center of this board is the AMD Ryzen Embedded V1000 series FP5 SoC based on 14 nm Raven Ridge silicon.

Since this SoC also packs a southbridge, the board is practically chipset-less. The Ryzen Embedded V1000 chip is configured with a rather surprisingly powerful 4-core/8-thread Zen CPU clocked at 2.00 GHz with 3.35 GHz boost, and 4 MB L3 cache. The iGPU is a Radeon Vega 11, which is fantastic for one of the intended applications using the four DisplayPort 1.4 outputs of this board digital-signage for storefronts or other similar tasks.

This Ryzen Embedded V1000 on the FS-FP5V comes packed with two DDR4 SO-DIMM slots, supporting up to 32 GB of dual-channel memory at up to speeds of DDR4-2993. Storage connectivity includes an M.2-2280 slot with PCI-Express 3.0 x4 wiring. Which for something like this should be more than enough, as well as an M.2 E-key slot with x1 wiring for wireless LAN cards for wifi connectivity, and a single SATA 6 Gbps port. Networking options allow for up to two 1 GbE interfaces. USB connectivity includes two USB 3.1 gen 1 ports at the rear-panel, and two USB 3.1 gen 1 ports at the front side of the board, one each of type-A and type-C. Stereo HD audio makes for the rest of it. The board draws power from either an external 2-pin DC or a  4-pin ATX.

Pricing and availability on the FS-FP5V has not been announced though we expect this to show up in wholesale channels soon for the commercial clientele.