With the launch of the Exynos 7420 Octa earlier this year, Samsung managed to gain the top spot in the mobile SoC sphere. After all, Qualcomm's throttling issues on the Snapdragon 810 left a vacuum that was begging to be filled, and with the immense capital and technological resources that Samsung has under its disposal, the Korean electronics giant capitalized on the opportunity very well. But at the pace things move in today's industry, the Exynos 7420 sounds a thing of the past and already we've started to see details pop up on Samsung's very own Mongoose cores for the next Exynos. 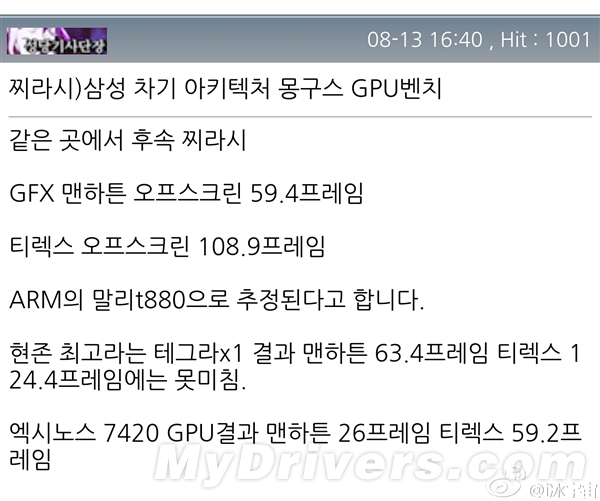 While earlier we saw details that allegedly depicted benchmark scores of Samsung's upcoming Mongoose cores, today its the GPU which will accompany them which sees some scores surface. Samsung's upcoming custom cores do sound quite impressive according to some information which has surfaced so far. In fact, each core is reported to come with a clock speed of 2.4 GHz and manages to cross 5k in multi core tests. These are significantly higher than the ones Samsung's Exynos 7420 can achieve and it should be no other way as well.

But that's for core processor performance. We've also managed to get our hands on some detailed GPU benchmarks of the next Samsung SoC and they also look to be as impressive as its custom cores. According to today's leak, the GPU's Manhattan off-screen scores are 59.4 fps and T-Rex off screen scores are 108.9 fps. This manages to put the Mali T880 second to Nvidia's Tegra X1, which is yet to feature in any mobile devices at all. Samsung's upcoming processor does seem to come with some very impressive numbers, though the authenticity of this information is of course to be confirmed. Stay tuned and let us know what you think in the comments section below.