With the warm market reception of the Galaxy S6 and S6 Edge, Samsung really seems to be confident in taking big strides. Asides from smartphone and electronic manufacturing, the Korean electronic giant's chip making capabilities aren't behind any manufacturer in the industry. Particularly Qualcomm. Seems like Samsung's determined to reduce its dependency as much as it can on the chip giant, with custom cores, that have started to pop up on the rumor mill will regularity. But that's not the only area Samsung seems to be determined to make it on its own. 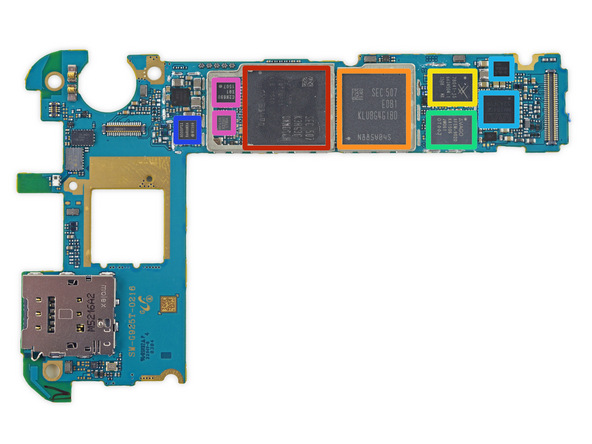 Another report, this time out of Wall Street now has some more troubling news for the US chipmaking giant. Aside from being completely absent from this year's lineup of Samsung Galaxy flagship, looks like Qualcomm's other components, motherboards in particular aren't that much popular amongst the Koreans anymore either. FBR and Co's Chris Rolland believes that the Korean electronics giant is looking to decrease its dependance on Qualcomm as much as possible, with several Galaxy S6 units available with AT&T not coming with the latter's proprietary modem. Even though the loss of a component deal for Qualcomm's isn't all that bad in the short term, it does suggest troubling news for the company in the long run. Following these developments, FBR degraded Qualcomm's stock rating from Outperform to Market Perform. In fact, a teardown of the Galay S6 Edge also reveals that the device is made up by a majority of components from Samsung.

Another report fresh out Korea now claims to have word on Samsung's custom cores for the Eynos. Samsung's Mongoose cores, which come with an interesting title, given that Mongoose eat Krait in that part of the world, have been rumored for quite a while. Business Korea is now claiming that Mongoose on the Exynos should be with us sometime around next year, which might as well be the Galaxy S7. Not only does this decrease reliance on Qualcomm, but it also allows Samsung to develop its own cores, hence reducing the burden placed on ARM as well, which we're sure they'd be happy to shoulder anyways. Samsung's moving fast it seems, and with Mongoose rumored to join the ranks of Apple's Cyclone, the scenario for chipset manufacturers seems to be changing quite rapidly. Thoughts? Let us know in the comments section and stay tuned for more.