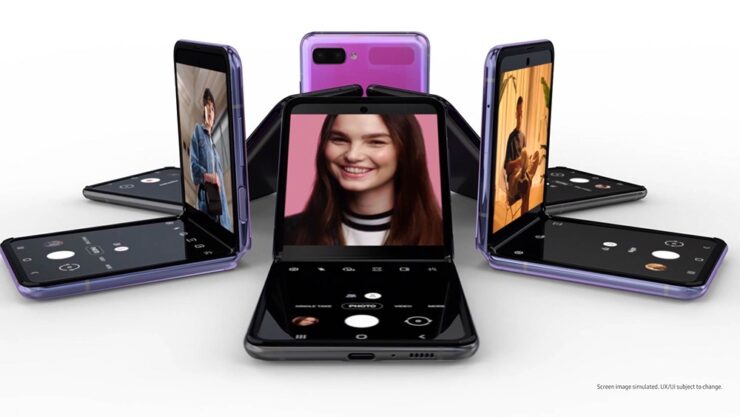 The Samsung Galaxy Z Flip foldable smartphone is now official. We have the features, specs, price and release date in one place.

It's almost safe to assume that the Galaxy Fold form-factor isn't quite ready to go further into the future. Sure, it was a great experiment and many people out there love it, but Samsung is evolving it further with the Galaxy Z Flip. Unlike the Fold, this one folds too, but vertically to turn into a very, very long smartphone, quite literally. Think of it as the new Razr, but better, obviously, because Samsung.

You might have seen the phone already in an official commercial during the Oscars, but we now have the real deal in front of us, complete with Samsung's keynote pizzazz.

Let's get the obvious specs out of the way first. The Z Flip packs a Snapdragon 855+ based on the 7nm process from Qualcomm, meaning it's up to par with the latest flagships out there already and really energy efficient at the same time. You also get 8GB of RAM, 256GB of UFS 3.0 storage and there is no microSD slot here. If you need more storage, then you have to make do with either Samsung Cloud, OneDrive or Google Drive.

There's a nano SIM slot in the Galaxy Z Flip and there's an option for eSIM too, provided you wish to take that route. And yes, the phone is obviously 4G LTE, supporting speeds of up to 1Gbps, with uploads hitting 150Mbps if your carrier supports it.

You get a 3300mAh (dual) battery which should get you through the day and it's something that has been engineered to fit in a tight space. But we really, really with there was a cell as big as 4000mAh. Also, Samsung has thrown in 18W of fast charging over USB-C and the phone is Adaptive Fast Charging compatible which means your Quick Charge 3.0 / 2.0 adapter will work just fine with this phone. Wireless charging is there too, and you can top up the Z Flip at a pace of 9W, which is surprisingly slow compared to every other flagship from Samsung. You also get Wireless PowerShare so you can top up your Galaxy Buds or any other phone if you like.

On the weight end, the phone is surprisingly light at just 183 grams. I say surprisingly because the smartphone turns into a monstrosity with dimensions of 167.9x73.6x6.9-7.2mm when fully opened.

There are two displays on the Z Flip. But, the external one is pretty minuscule at just 1.1-inches with a screen resolution of 300x112 (303ppi). But that external display is Super AMOLED, always on and Gorilla Glass 6. This display is going to be your window into your notifications, and since it's always on, therefore you won't miss anything either, which is nothing short of awesome. You can even use the external display as a viewfinder for taking selfies without even opening the main display.

The real star of the show is the internal display that unfolds to reveal itself in its full glory. It has a resolution of 2636x1080 (425ppi) pixels, putting it in the ballpark of FHD+ resolution with a 21:9 aspect ratio. In case you are wondering, this display is actually quite tall. Also, the display is what Samsung calls Dynamic AMOLED Infinity Flex Display, and has a size of 6.7-inches. And yes, it has a crease, something which Samsung says is pretty normal for a smartphone of this nature. Only time will tell how durable is this display but given that the company ditched the Galaxy Fold design for the Samsung Galaxy Z Flip, we're only assuming that this form-factor is far superior than before.

This gorgeous display is extremely thin glass and not plastic.

Just like any other Samsung phone, the Galaxy Z Flip is packed with some great cameras. On the 'front' there's a 10-megapixel camera with an aperture of f/2.4 and a 80-degree field of view.

The party really starts to light up when you flip the phone around (sorry about the pun). There's a 12-megapixel main camera with an aperture of f/1.8, then there's the 12-megapixel ultra-wide camera with an f/2.2 aperture and both of these cameras can record video in up to 4K UHD at 60 frames per second with HDR10+ (main camera only). The front camera can do video in 4K UHD at up to 30 frames per second.

While the Samsung Galaxy Z Flip doesn't quite pack insane amounts of camera lenses, but it has enough to get you through the day without breaking a sweat. Thanks to HDR10+ support, you can rest assured that everything you snap or record will absolutely look stunning.

Super Steady video is built into the Z Flip, allowing you to never ever worry about shaky footage no matter where you are.

The Galaxy Z Flip runs Android 10 out of the box, which is awesome, obviously. And it runs Samsung's custom skin which is One UI 2.0 in this case. Personally, One UI hits home for me every single time as it's a perfect combination of features and easy of use. It's not an in-your-face UI in any case, which is nothing more than a big win.

Obviously, the folding part of the phone is there for a reason and it comes into play as Flex Mode. What this does is, treat the upper and bottom halves of the screen as two independent screens. For example, if you are running Google Duo, you can use the upper half of the screen for video while the bottom half can show you on-screen controls. While this feature does seem cool and promising, we're not sure how well it will sit with developers.

Galaxy Z Flip users even get access to YouTube Premium. We're not certain if this is a limited time thing, but yeah, this is definitely going to win hearts.

The Galaxy Z Flip is priced at $1380 which is pretty steep, yes, but given the amount of head turning moments this phone will give you, it's totally worth it. 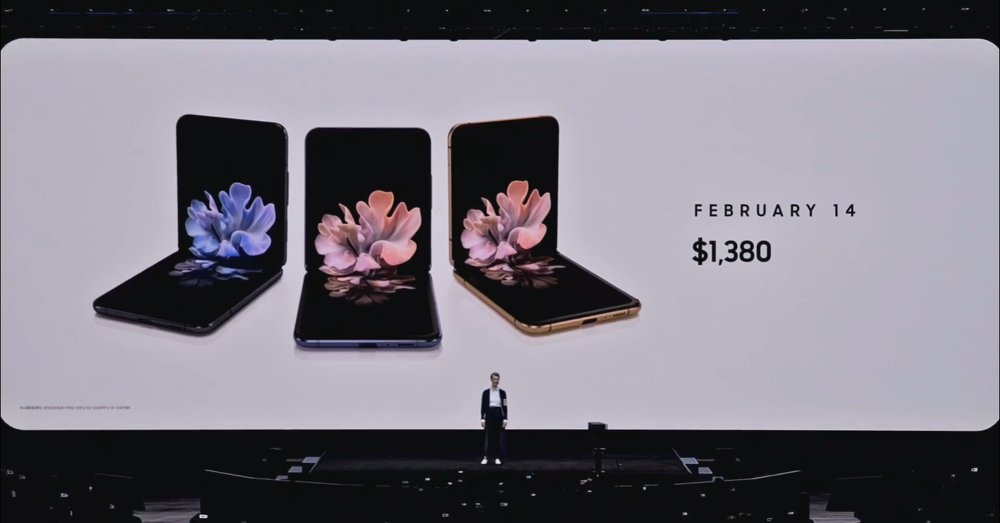 The Galaxy Z Flip will be available online and in stores on the 14th of February, this Friday.