The team behind the open-source Ryujinx Nintendo Switch PC emulator has released a new version of it, which allows players to cut game loading times by up to 70%.

Over the past few months, we already dedicated some articles to this fairly new Nintendo Switch emulator, including the fact that this open-source project was able to run Animal Crossing: New Horizons a few days after its global release.

It’s quite an impressive Switch emulator and the team has now released version 1.0.4709, which comes with a new feature called: Profiled Persistent Translation Cache. Basically, this feature reduces game loading times by up to 70%. In order to use this new feature, it needs to be enabled in the emulator’s system settings. We’ve included a graph with a loading time comparison down below.

“In a nutshell, this feature caches translated functions so that they do not need to be translated every time the game loads”, the Ryujinx team explains. “This results in a significant reduction of load times --the amount of time between launching a game and arriving at the title screen-- for nearly every game.”

After enabling the profiled persistent translation cache option from the GUI, during the first start of a title a profiling file (.info) is created or updated; at the second start of the title the already saved profiling information is used to decide which new functions must be translated and how. Any function not translated will be translated at the next run; at the end of this phase a cache file (.cache) is created and the execution continues. At the third start of the title the already translated and saved functions are used to speed up the loading of the title. 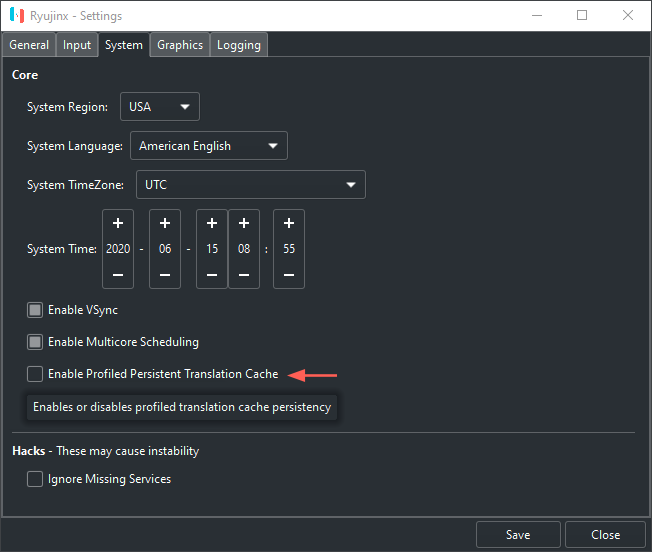 As long as the system remains enabled, these phases are repeated at or during the reuse of the title, allowing a progressive growth of the profiling file and the cache file, limiting the use of the resources.

For the sake of completeness, we’ve also included the release notes for version 1.0.4709:

The latest Ryujinx version can be downloaded through the emulator’s official website right here.