[Rumor] : NFC Appears To Be Confirmed For The iPhone 6 – More Blueprints Appear

After the blueprint of the RAM module for the iPhone 6, GeekBench has released another blueprint today which it claims is of the NFC Chip on the iPhne 6. Yesterday's blueprint appeared to confirm that the iPhone 6 will be coming with 1 GB of RAM, but was in fact a schematic of the RAM chip used on the iPhone 6. Which, as we told you, can theoretically be used in quantities greater than one if space permits.

Today's blueprint comes with the 'PN65V' heading, which is being touted by GeekBench as confirmation of the fact that NXP's NFC chip will feature on the iPhone 6. NXP's PN65V Chip is indeed capable of near field communication, which if enable on the iPhone 6 will have several benefits for consumers. While this is the first time purported schematics of the chip have appeared, NFC has been rumored to come alongside the iPhone 6 for quite a while now. 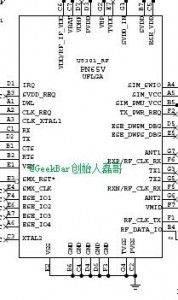 First of this was when pictures of the alleged logic board of the device appeared. But even before that, Apple had been reportedly in talks with its partners about launching a Mobile Wallet platform with the iPhone 6. The last we heard of NFC was when the capability was allegedly confirmed by an insider source known to website VentureBeat.

While there is no way to confirm the authenticity of the schematic on the right apart from GeekBar's reliability, all in all it does show a space labelled as PN65V. If Apple were to include NFC with the iPhone 6 then the benefits provided for customers will be numerous. Payments will be made on the go and the user will become even more dependent on the smartphone. Sounds exciting indeed. So stay tuned for September.