Ok how many of you were expecting a Angry Bird Star Wars Prequel ? I doubt there’s anyone who doesn’t like smashing funnily dressed birds quivering with rage at annoying little pigs. And needless to say the Angry Birds Franchise has hit it big. However a recent tease image has spread all over the internet and screams Prequel all over the place. More specifically Angry Birds Star Wars of Episode I, II and III. 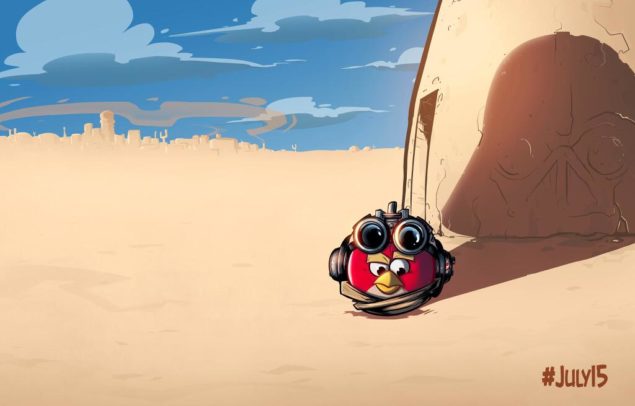 In this picture of the upcoming Rovio Angry Birds Star Wars Prequel there a lone angry bird in the middle of a desert landscape. Now I am not a big fan of Star Wars (Trekkie all the way!) but I am pretty sure that little angry bird is dressed up as Annakin Skywalker and the shadow his soon to be Evil self.

This particular setting and character hints at possibly a game containing elements from Star Wars Episode I, II and III. Sadly there’s only so much one can extract from a single picture. However the ominous 15 July written in red letters makes it a very easy bet that Rovio is getting ready to dish out Big News about this New (and improved ? )Angry Birds Star Wars Prequel.

Rovio has been struggling to define itself as a much broader entity then just Angry Birds and this year has seen release on release of franchises. From the instantly successful launch of the Amazing Alex (a more physics oriented version of Angry Birds) to the launch of “The Croods” (in collaboration with Dreamworks.