NVIDIA GeForce RTX 4090 graphics card is going to be the next-gen flagship for the green team, ushering in performance levels never before seen in the PC gaming segment, and here's everything from specs, price, and performance that you need to know.

The NVIDIA GeForce RTX 3090 series proved that the green team can go to extreme lengths to secure their lead in the PC graphics segment. Labeled as 'BFGPU', a new breed of enthusiast & ultimate graphics card, these provide the best performance possible with the best possible PC gaming features in a package that's next to none.

NVIDIA's direction with the BFGPU was to design a graphics card not just for the ultimate gamer but also for professional content creators too who also want to have the best graphics performance at hand to power the next generation of AAA gaming titles with superb visuals and insane fluidity. It's not just the FPS that matters these days, it's visuals, and a smoother frame rate too and this is exactly what the GeForce RTX 30 series is made to excel at.

We should expect similar things with the next-generation flagship too but an important factor to consider is that GPUs are becoming more power-hungry and more pricey. It is a trend that might continue into the future as we get better products but in return, there's always a cost to pay for end consumers. So starting with what we know so far, first we should take a look at the brand new Ada Lovelace or AD10* class GPUs that will be powering the next-gen GeForce RTX 40 series cards.

You can also read the expected specs, prices, and performance of other upcoming RTX 40 GPUs in the posts below:

The NVIDIA Ada Lovelace AD102 GPU features up to 12 GPC (Graphics Processing Clusters). These are 5 more SMs compared to the Ampere GA102 GPUs. Each GPU will consist of 6 TPCs and 2 SMs which is the same configuration as the existing chip. Each SM (Streaming Multiprocessor) will house four sub-cores which is also the same as the GA102 GPU. What's changed is the FP32 & the INT32 core configuration. Each sub-core will include 64 FP32 units but combined FP32+INT32 units will go up to 128. This is because half of the FP32 units don't share the same sub-core as the IN32 units. The 64 FP32 cores are separate from the 128 INT32 cores.

Moving over to the cache, this is another segment where NVIDIA has given a big boost over the existing Ampere GPUs. The L2 cache will be increased to 96 MB as mentioned in the leaks. This is a 16x increase over the Ampere GPU that hosts just 6 MB of L2 cache. The cache will be shared across the GPU. The GPU will also feature up to 192 ROPs for the full-die.

The full die has not been featured on any GPU so far, not even the L40 which has 2 SMs disabled. It is likely that as yields progress, we will eventually see a gaming and workstation product using the full-fat AD102. Till then, the RTX 4090 is the top gaming graphics card while the RTX 6000 Ada is the top workstation solution.

At the heart of the NVIDIA GeForce RTX 4090 graphics card lies the Ada Lovelace AD102 GPU. The GPU measures 608,4mm2 and will utilize the TSMC 4N process node which is an optimized version of TSMC's 5nm (N5) node designed for the green team. The GPU features an insane 76.3 Billion transistors.

The Ada GPUs are based on the TSMC 4N process node which is a custom process designed exclusively for NVIDIA. It is essentially an optimized version of the N5 (5nm) process, offering drastic increases in transistors, cores, and frequency. The top AD102 GPU packs 70% more cores and also offers 76.3 Billion transistors while offering over 2x the performance per watt.

The NVIDIA GeForce RTX 4090 will use 128 SMs of the 144 SMs for a total of 16,384 CUDA cores. The GPU will come packed with 96 MB of L2 cache and a total of 384 ROPs which is simply insane but considering that the RTX 4090 is a cut-down design, it may feature slightly lower L2 and ROP counts. The clock speeds are not confirmed yet but considering that the TSMC 4N process is being used. The clock speeds are rated at up to 2.6 GHz and NVIDIA is claiming over 3 GHz speeds with overclocking which you can read more about here.

As for memory specs, the GeForce RTX 4090 will feature 24 GB GDDR6X capacities that will be clocked at 21 Gbps speeds across a 384-bit bus interface. This will provide up to 1 TB/s of bandwidth. This is the same bandwidth as the existing RTX 3090 Ti graphics card and as far as the power consumption is concerned, the TBP is rated at 450W. The card will be powered by a single 16-pin connector which delivers up to 600W of power. Custom models will be offering higher TBP targets.

As for its brand new Founders Edition cards, the GeForce RTX 4090 24 GB and RTX 4080 16 GB, NVIDIA has produced a compact PCB similar to the ones we saw on the previous generation & designing a PCB like this helps improve airflow and cooling performance.

NVIDIA says that they have further optimized the Dual Axial Flow Through system, increasing fan sizes and fin volume by 10%, offering 20% higher air flow and upgrading to a 23-phase power supply (20+3 Phase for RTX 4090). Memory temperatures are reduced, and the new, substantially more powerful Ada GPUs are kept cool in ventilated cases, giving gamers excellent overclocking headroom. NVIDIA went through a rigorous testing procedure and is said to have evaluated as many as 50 fan designs before finalizing the one we are getting on the new cards. The cooler is used to dissipate heat from the heatsink assembly that comprises a vapor chamber, a big jump from the previous design too.

The NVIDIA GeForce RTX 4080 also uses the same cooler as the RTX 4090 Founders Edition and since it has a lower TDP, it should deliver even better thermal performance.

Each GeForce RTX 40 Series Founders Edition graphics card reduces cable clutter by leveraging the new standard GPU power input of next-gen ATX 3.0 power supplies, the PCIe Gen-5 16-pin Connector. This enables you to power GeForce RTX 40 Series graphics cards with just a single cable, improving the aesthetics of your build. If you are using a previous-gen power supply, an adapter cable is included in the box, allowing you to plug in three 8-pin power connectors, with an optional fourth connector for more overclocking headroom. ATX 3.0 power supplies will be available in October from ASUS, Cooler Master, FSP, Gigabyte, iBuyPower, MSI, and ThermalTake, with more models to come.

One advantage of the new 16-pin connector is that while the Founders Edition cards are designed at 450W & 320W, respectively, they can utilize the extra headroom provided through the new connector for extreme overclocking with the RTX 4090 going for that full 600W mark. The new power delivery also gives the RTX 40 series a 10x increase in response time to power transient management compared to the previous generation.

NVIDIA has also leveraged Micron's latest GDDR6X memory chips for its GeForce RTX 40 graphics cards which run 10C cooler, are more power efficient and since they are all 16Gb DRAM dies, they can be fused on one side of the PCB to be cooled better than dual-sided memory.

The NVIDIA GeForce RTX 4090 is the first gaming card to hit the 100 TFLOPs compute horsepower limit.

So we decided it was time to test how far we can push the NVIDIA GeForce RTX 4090 Founders Edition with some overclocking. To get to 100 TFLOPs, we first pushed the power limit and temp limit slider all the way to the max and upped the Core and Memory clocks by +275 and +1100 MHz, respectively. This wasn't enough as the card was being limited by its power design. That is when we landed our hands on MSI's latest Afterburner which allowed us to raise the core voltages. At 100%, we saw some performance regression so we had to stick with +55% which showed us some good results.

With the overclock applied on our NVIDIA GeForce RTX 4090 graphics card, we saw a maximum GPU core clock of 3150 MHz on the AD102 Ada GPU, a maximum power draw of 547W and our temps peaked at 69C. All of this was done on air and with no exotic liquid cooling, chillers or LN2 were used.

And behold, we saw the magical number of not 100 but almost 101 TFLOPs right in front of our eyes. To put things into perspective, this is a 22% compute boost over the stock RTX 4090 and a 2.5x compute performance boost over the RTX 3090 Ti. The AD102 GPU also ripped apart the data-center-focused Hopper H100 GPUs by offering over 50% better FP32 performance. Ada Lovelace is truly a game changer and we can definitely see it become a popular compute and AI graphics card when Quadro variants of the said chip launch as the RTX 6000 ADA and L60.

This will be a 2x compute performance uplift for each graphics card versus its predecessor and this is without even factoring in the RT and Tensor core performance which are expected to get major lifts too in their respective department. Now FLOPs aren't necessarily reflective of the graphics or gaming performance but they do provide a metric that can be used for comparison. A 2-2.5x gain over the RTX 3090 & RTX 3090 Ti would be very disruptive and it makes sense why NVIDIA is going so hard with higher power limits on their cards.

Gamers should expect 4K gaming to be buttery smooth on these graphics cards and with DLSS, we might even see playable 60 FPS at 8K resolution which is something that NVIDIA has been trying to achieve with its RTX 3090 series BFGPUs for a while now. 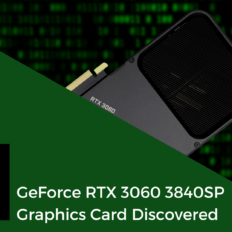