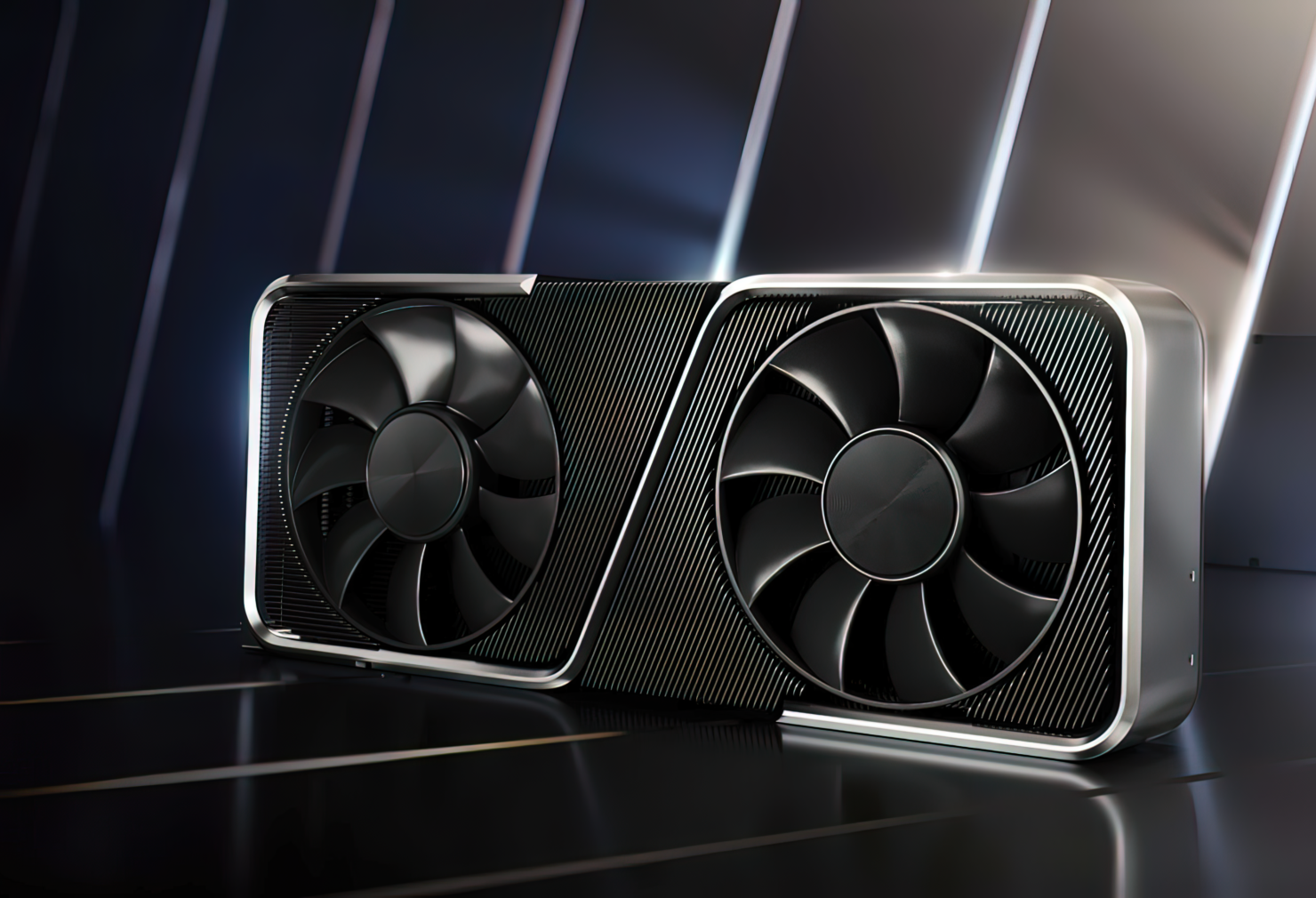 It's simple, the RTX 4090 series will be aimed at users who want the best of the best without worrying about the amount of money they are spending while the RTX 4080 series is aimed at users who want the best performance at the best possible price. The RTX 4070 will be the sweet spot for high-end gaming, while the RTX 4060 is designed for the gaming masses at a price that will be hard to ignore given its performance, and the RTX 4050 is aimed at those who want to enter the new series at a budget tier pricing without losing the next-gen feature set.

Just like the generation before it, the RTX 3050 managed to offer performance close to the RTX 2060 but was hurt by its 128-bit memory interface. The RTX 3050 did offer better performance, features, and value (at MSRP) versus its competition, the RX 6500 XT but it took months to reach a price close to the MSRP. Overall, the RTX 3050 was a 1080p-focused and eSports-aimed graphics card and the same should be expected of the RTX 4050. 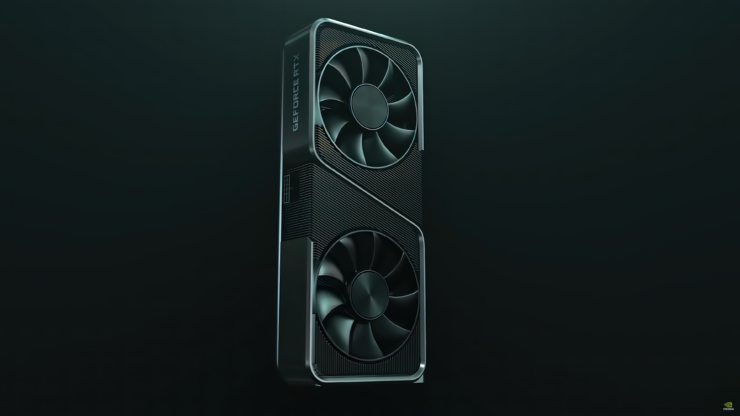 The '50-class' segment is the share-cow for NVIDIA and it's definitely something that NVIDIA wants to have priced right in its given performance.

We should expect similar things with the next-generation gaming solution too but an important factor to consider is that GPUs are becoming more power-hungry and more pricey. It is a trend that might continue into the future as we get better products but in return, there's always a cost to pay for end consumers. So starting with what we know so far, first we should take a look at the brand new Ada Lovelace or AD10* class GPUs that will be powering the next-gen GeForce RTX 40 series cards.

Starting with the GPU configuration, the NVIDIA GeForce RTX 4050 series graphics cards may utilize both AD106 and AD107 GPUs. We don't think there would be a 'Ti' configuration in the lineup as we didn't get that during the Ampere family but it could change. The reason I mention both AD106 and AD107 GPU for the same card is that the RTX 3050 did the same. The card was produced on GA106 GPUs before GA107 became widely available in the market after its mobile debut.

The RTX 3050 was always meant to utilize the GA107 GPU but NVIDIA made good use of the GA106 dies that couldn't reach the yields required for the higher-end cards. The GPU is said to measure around 150mm2 and will utilize the TSMC 4N process node which is an optimized version of TSMC's 5nm (N5) node designed for the green team.

The NVIDIA Ada Lovelace AD107 GPU is expected to feature up to 3 GPC (Graphics Processing Clusters). This is the same GPC count as the GA106 GPU. Each GPC will consist of 4 TPCs and 8 SMs which is the same configuration as the existing chip. Each SM (Streaming Multiprocessor) will house four sub-cores which is also the same as the GA106 GPU. What's changed is the FP32 & the INT32 core configuration. Each sub-core will include 128 FP32 units but combined FP32+INT32 units will go up to 192. This is because the FP32 units don't share the same sub-core as the IN32 units. The 128 FP32 cores are separate from the 64 INT32 cores. 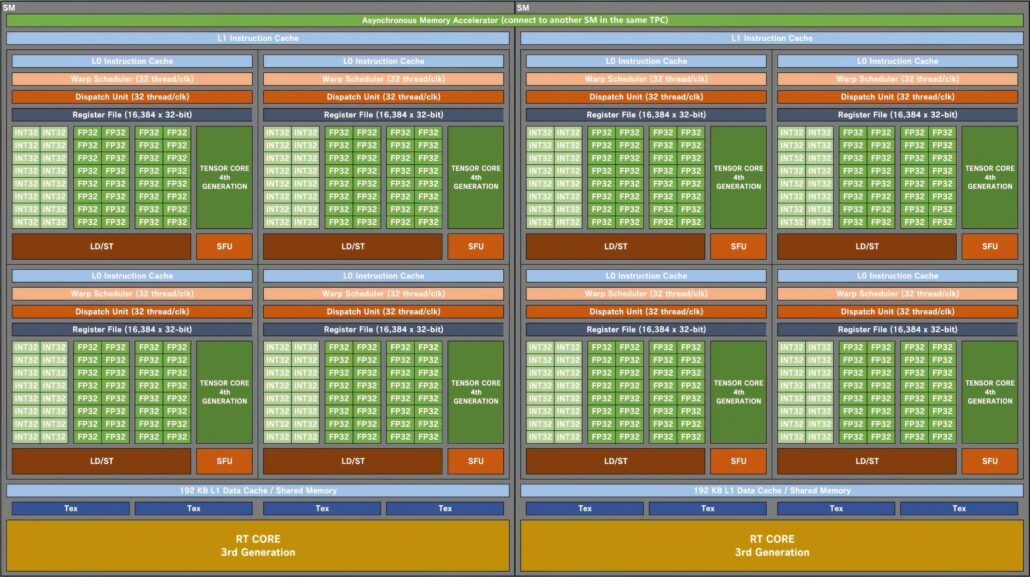 Moving over to the cache, this is another segment where NVIDIA has given a big boost over the existing Ampere GPUs. The Ada Lovelace GPUs will pack 192 KB of L1 cache per SM, an increase of 50% over Ampere. The L2 cache will be increased to 16 MB as mentioned in the leaks. This is an 8x increase over the Ampere GA106 GPU that hosts just 2 MB of L2 cache. The cache will be shared across the GPU.

Finally, we have the ROPs which will stick to 16 per GPC. You are looking at up to 48 ROPs, the same as the current GA106 GPUs. There are also going to be the latest 4th Generation Tensor and 3rd Generation RT (Raytracing) cores infused on the Ada Lovelace GPUs which will help boost DLSS & Raytracing performance to the next level. Overall, the Ada Lovelace AD107 GPU will offer: 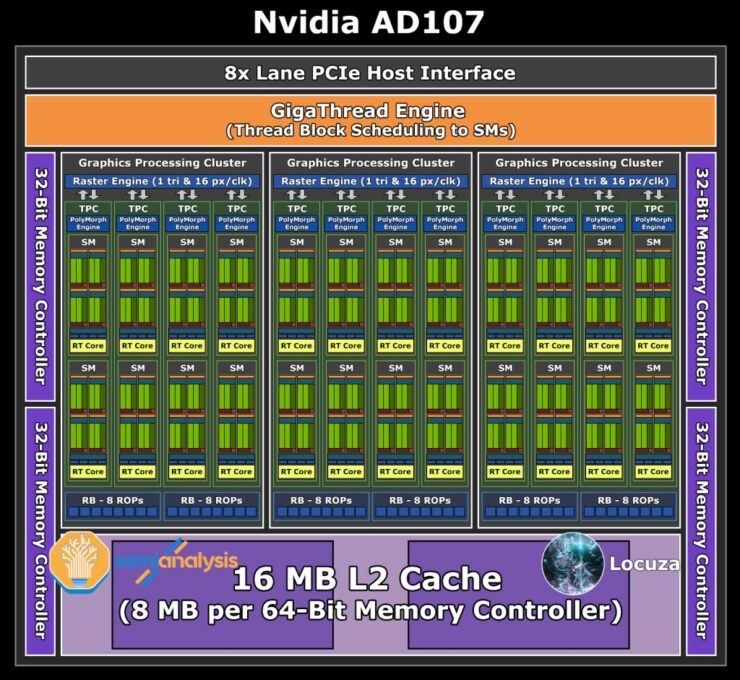 Do note that clock speeds, which are said to be between the 2-3 GHz range, aren't taken into the equation so they will also play a major role in improving the per-core performance versus Ampere.

NVIDIA may or may not offer two variants of the GeForce RTX 4050 graphics cards. That depends on whether they have enough chips or defective dies at hand to turn into discrete graphics cards but we know that there is indeed going to be an RTX 4050 graphics card. The laptop side may see more configurations but for RTX 4050 on desktops, we can expect the following specs.

The clock speeds are not confirmed yet but considering that the TSMC 4N process is being used, we are expecting clocks between the 2.0-3.0 GHz range. The higher than usual clock speed bump comes from the fact that NVIDIA is making a two-node jump considering the Ampere GPUs with Samsung 8nm node was in reality a 10nm process node with some optimizations. NVIDIA is skipping 7nm and going straight for a 5nm node and not even the vanilla variant but an optimized version of it. With Pascal on the TSMC 16nm node, NVIDIA delivered a huge frequency leap and we can expect a similar jump this time around too.

As for memory specs, the GeForce RTX 4050 is expected to rock 8 GB GDDR6X capacities that might come at faster 20+ Gbps speeds across a 128-bit bus interface for over 320 GB/s of bandwidth. The thing is that you can either go 8 GB for such a graphics card in the given 128-bit bus or cut down to 96-bit for either 6 GB or 12 GB configurations.

The GeForce RTX 4050 graphics card is also said to rock a TGP of around 150W which is an increase of 30% over the RTX 3050 on the GA107 GPU. This is a massive TGP increase and the performance needs to be really good for NVIDIA to keep its efficiency numbers up. 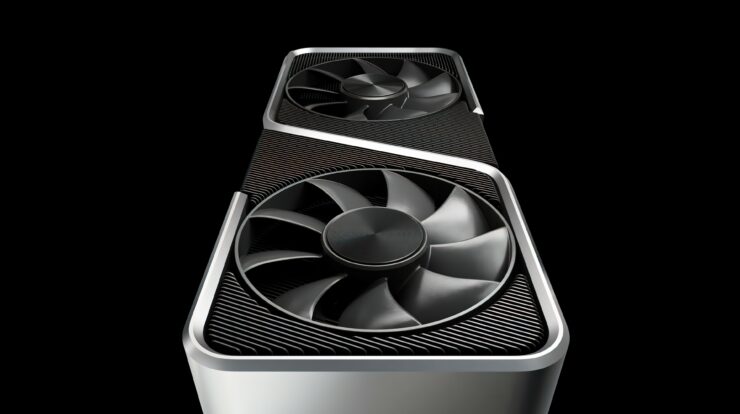 As for its feature set, the NVIDIA GeForce RTX 4050 graphics cards will rock all the modern NV feature sets such as the latest 4th Gen Tensor Cores, 3rd gen RT cores, and the latest NVENC Encoder, and NVCDEC Decoder, and support for the latest APIs. They will pack all the modern RTX features such as DLSS, Reflex, Broadcast, Resizable-BAR, Freestyle, Ansel, Highlights, Shadowplay, and G-SYNC support too.

As for the performance of the gaming GPUs, we can only use theoretical numbers here since the launch is a bit far away but based on what we know, the RTX 40 series cards might be the first gaming cards to hit the 100 TFLOPs compute horsepower limit.

Based on a theoretical clock speed of 2.2 GHz, you get up to 14 TFLOPs of compute performance and the rumors are suggesting even higher boost clocks. Now, these are definitely sounding like peak clocks, similar to AMD's peak frequencies which are higher than the average 'Game' clock. A 14+ TFLOPs compute performance means more performance on a '50-class' GPU than a '60-class flagship' which will be a good bump. But one should keep in mind that compute performance doesn't necessarily indicate the overall gaming performance.

This will be around a 55% compute performance uplift for the GeForce RTX 4050 graphics card versus its predecessor and this is without even factoring in the RT and Tensor core performance which is expected to get major lifts too in their respective department. Now FLOPs aren't necessarily reflective of the graphics or gaming performance but they do provide a metric that can be used for comparison.

Gamers should most realistically expect good 1080p performance from the RTX 3050. The '50' series has always been targeted at budget 1080p solutions that are popular amongst eSports with technologies such as Reflex, DLSS, and various streaming capabilities at a mainstream price point.

The NVIDIA GeForce RTX 3050 was launched at $249 US. We can expect NVIDIA to retain the same prices for these cards with a $10-$20 US pricing adjustment here and there.

NVIDIA really needs to secure more gamers in the $200-$300 US segment but they have to deliver a product that's worth the price. The RTX 3050 was a decent upgrade path given and what made it really interesting was its expansive 'GeForce RTX' feature set. This time, NVIDIA should focus on both the feature and performance side of things to lure more gamers into their ecosystem as this is going to be a really heated segment with Intel entering the space with its Arc lineup. 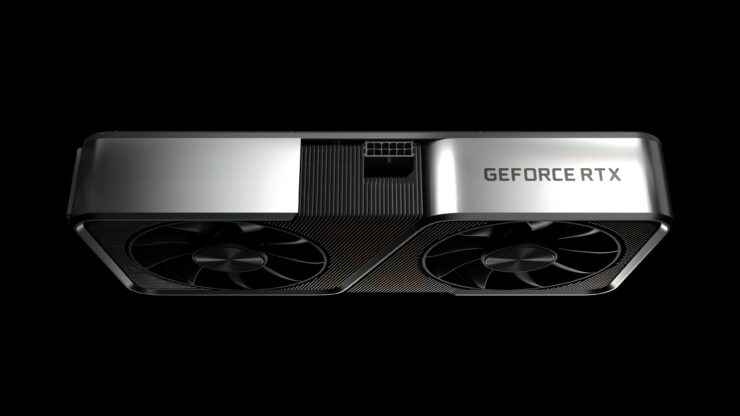 The NVIDIA GeForce RTX 40 series graphics cards are rumored for a Q3 reveal and a launch is expected in Q4 2022 so we will know for sure what NVIDIA is up to in the next few months.