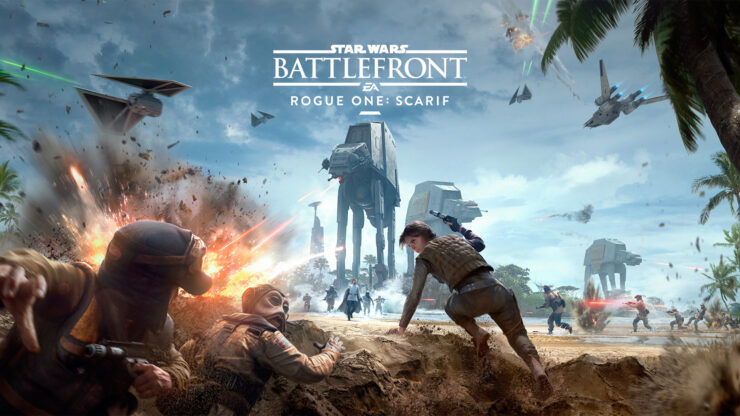 Join the Rebellion. EA celebrates one year of Star Wars Battlefront with details of the fourth and final expansion pack, Rogue One: Scarif. Inspired by the movie due to release next month, it's included in the new Star Wars Battlefront: Ultimate Edition (out now for PlayStation 4, Xbox One and PC) and available to all Season Pass owners for free on December 6th.

Rogue One: Scarif includes four new maps including a certain deadly beach you may have noticed in the Rogue One movie trailer. The two new heroes you can play as include Jyn Erso and Orson Krennic. There's even a new multi-stage mode that includes space and ground combat, something that fans had been asking for. Here's hoping the next trailer shows them in action.

To celebrate one year since release, you can play the Outer Rim, Bespin, or Death Star expansion packs for free from now until November 20th. All players will be able to earn 4x score for the entire weekend.

PlayStation VR users can also look forward to an exclusive (and free) VR mission that puts you in the cockpit of an X-Wing starfighter.

The Star Wars Battlefront team at DICE thanked the fans for all their support on the official blog:

Thanks for helping us make this first year an incredibly memorable one for Star Wars Battlefront. Your support, feedback, and participation have meant a lot to all of us, and we wouldn't be where we are today without our amazing fans. There are quite a few things to look forward to, so come celebrate with us and get ready for more exciting updates and events, in-game and out.

Be sure to take a look at our Star Wars Battlefront review to see what we thought of EA's gorgeous team-based online shooter when it launched last year. Also as a public service, don't forget that Rogue One: A Star Wars Story hits theaters December 16th.