We learnt that the map is going to be three times larger in Rise of the Tomb Raider from a recent podcast, but over at the official Square Enix forums for Rise of the Tomb Raider, there's a tradition of almost every month posting a Q&A thread, and this has been going on since December 2011. The most recent Q&A thread got its answers from the Franchise Creative Director - Noah Hughes, just before last weekend. 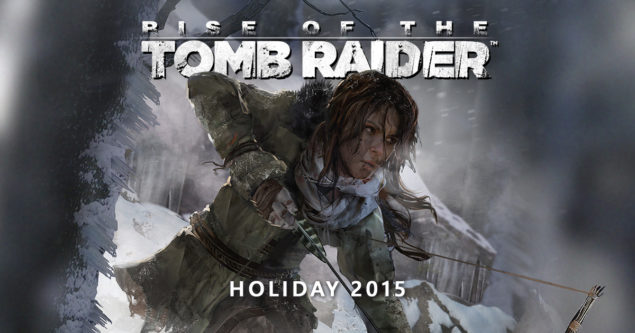 There will be a TLDR (too long didn't read) at the end of the post in case you don't want to sift through all of Noah Hughes answers, now let's get on with the Questions and Answers shall we?

How much will the environment effect Lara? Will Lara's clothes rip and get dirty like in the previous game? Will snow stick to her hair and clothes, and melt in warmer environments?

Yes, we have a lot of that stuff. We have story specific progression, as we did last time. Referencing Game Informer as an example, Lara manages to survive her encounter with the bear but not without taking a shredded jacket and a wound to show for it.

We also have system-based reflection of damage on Lara. So if you are hurt, that will show on her character in certain ways. Then, we have the wet and dry states, so when you get in the water, Lara will get wet and then progressively dry off. We also have a dirty state, so she’ll go through situations that leave mud or other dirt on her character and that will clean off. And we have areas where snow might stick to her hair and then melt away indoors.

In addition to that, we try to go even one step farther to have it affect Lara’s animations, so when she steps near a source of heat, she might warm her hands on it. When she steps back out into the cold, she might shiver for a moment as she adjusts to the temperature. We try to go past the visual layer and add a behavioral layer.

We’ve tried to do as much as we can to connect Lara with the world, so a lot of this is the team enjoying adding details to the character because it supports her, grounding her in the moment. In the context of the story, they almost become reminders of everything you’ve been through, and how far you’ve come since the beginning of the game. They reinforce the systems on the moment-to-moment basis, and reinforce the journey on a game basis.

Lara will have some new close quarters combat opportunities based on gear items. It’s a little bit different than the weapon contextual ones in 2013 – those were the ranged weapons. Adding melee finishers with things like the knife is a new type of melee skill that we give Lara. Beyond that, we give finishers from specific stealth opportunities. We’ve seen things like stealth kills from a bush in a number of games, but it starts to feel more Lara-like and survival-y when you’re doing take downs from the trees, or one of my favorites is the stealth kill from the water. These are all ways we have enhanced her core abilities to finish guys up close, especially as an extension of our new enhancements to stealth gameplay.

All of those play into your ability to approach combat and take advantage of these different tools and locational opportunities that the player has. In characterizing Lara, it’s important that we promote her mobility and her agility and use of the environment and a lot of other things that set her apart as a character, and we don’t want to make her melees so effective that she essentially brawls her way through the game.

Will Lara be able to sprint in ROTTR?

One of the things we really do try to promote is a world that’s dense with traversal and platforming opportunities and try to make it as interesting as possible, especially using Lara’s traversal skills and even traversal gear as you gain it in the game. Oftentimes, we try to create areas that are denser more so than vast and expansive. We speed up your traversal in the world through skill and platforming rather than strictly running.

We try to tune Lara’s speed such that it’s effective in combat and promotes that mobility. Like I said, you can run fast enough to create distance and things like that, but we really promote interesting traversal more than sprinting across open terrain. The truth is we get requests for it still. But I guess the way we respond to those requests is we try to make those areas more fun to traverse rather than to simply get you through quicker.

How limited is the team in developing a new theme for Tomb Raider considering survival action is the new main concept? (as opposed to action adventure TR used to have).

When you come out of the reboot and talk about hostile wilderness and ancient spaces guarded by inhabitants like bears or wild wolves, the reality is the original Tomb Raider had wolves and bears. A lot of the things that have been wrapped into a survival theme have always been there as part of the franchise. The hostile environment, the treacherous terrain being one of the greatest opponents, and the wildlife in those spaces is informed by the original.

In some ways we’ve pushed survival feeling different than it did before. We go that extra step to try to make sure she’s not relying too heavily on her gear and equipment that she brings with her, and that may be a bit differentiated from the previous games where being well-equipped and rich is very much a part of it. There is sort of this commitment to create situations where Lara has to face these hostile wildernesses in a more one-on-one, stripped of her gear situation, and has to use her wits and her resourcefulness and what she can find in the environment in order to survive. So that’s where it starts to take on that survival tone and experience but again, I feel like those are really a fictional formalization of a lot of the ingredients that were always a part of Tomb Raider.

We talk about not relying too heavily on the gear and trying to recreate this almost David and Goliath story, where Lara has to take on this daunting wilderness in order to unlock its secrets. Part of that is to bring out her character, to recognize her determination and her wit and resourcefulness. And then, as she starts to get immersed in the myth and the culture, her book learning and intellect and intelligence all come into play. It really is that package together that makes her the Tomb Raider.

I hated the combat QTE's in TR9 (ie, mash button escape from wolf bite). I loved the open crate/door QTE's though (not sure if that's a QTE). Is there internal debate regarding implementation of QTE's?

We do hotly debate the subject of QTE’s and we have taken a different approach in this game than in the last. Having said that, we haven’t removed all the combat related QTE’s. However, we do trigger them much more sparingly. What we try to focus on is the consistent responses to gameplay. In the case of prying, we use that to equal an intense and concerted effort from Lara. Occasionally we will use that same concept in a combat context, but you will see that much less than in the last game. I don’t know if dodges and counters fit into QTE’s, but we also still use those more player-driven windows in combat where players have the B button prompt but they’re more systemically triggered rather than exotic moments.

The other thing we try to do with QTE’s is always make the interface consistent. Rather than mash a random button, you will have an exotic version of a core mechanic. So melee, for example - if you’re in a situation where you’re trapped but your hands are free, you might be swinging your axe with the Y button. That’s a normal mechanic done in an exotic situation. This is trying to get away from not knowing what you’re supposed to do until you see the button prompt. The button prompt should really reinforce the mechanics that you’re familiar with, so, whenever possible, we take and create intense moments where you may have to use one of these core mechanics like pry or melee or shoot, but trying to avoid the situation where you’re waiting to see what button it tells you to push. That’s the main changes – to get rid of all button paired, “Simon says” versions of QTE’s and to use exotic expressions of core mechanics whenever possible.

If you wish to check out the forum thread you can do so over here, and the first post in that thread lists all of the previous Q&A threads as well!