The Warhammer 40K series has existed for a while now, but incredibly enough, I never really got into it. I’ve seen how zany and over-the-top characters are in this series, but nothing really brought me into it. But then, I got pulled into the fray once I got a review code of a side game that centers around the Orks: Warhammer 40K: Shootas Blood & Teef.

From what I’ve been told, the Orks are the only race that gets to have fun in the Warhammer universe. They are among the most dangerous alien races for everyone else, but when it comes to their perception, they have simple goals: fight and conquer. Honestly, that would be how I would describe Shootas, Blood & Teef: Simple.

If you came to Warhammer 40K: Shootas, Blood & Teef expecting something like a war game, you’re in for a wild ride. This is a Run & Gun shooter that gives you a simple story backdrop and targets to shoot at. While the Warhammer 40K series is known for being quite grimdark at times, this game just spits on that and makes you see things from the eyes of the Orks.

Ever played Guns, Gore & Cannoli? Well, you know how Warhammer 40K: Shootas, Blood & Teef plays. You take on a role of an Ork who seeks out revenge against his boss who basically betrayed him because he wanted to steal his hair squig, and that’s about it. The game is about your journey as you fight against humans, other Orks, and Genestealers.

You have a selection of 4 classes that each slightly affect how you approach battles. The Weirdboy has a grenade attack and lightning-based melee; The Beast Snagga Boy uses exploding spears; the Storm Boy can use cluster bombs; and the Flash Git, which shoots less ammo sometimes, so you can keep on shooting things.

As I said, this game is relatively simple. It uses a twin-stick control scheme, moving with the left stick and aiming with the right stick. Once you graduate from the Ork School on How to Shoot Things, you pretty much are ready to take on the role of the piece of trash who shoots things and kills everything until you inevitably die.

While the concept is simple, the developers didn’t shy away from making some slightly complex level designs. The name of the game is going from left to right, but the way to the destination is filled with obstacles and several pathways. Sometimes, you have to climb a bunch of boxes to find a switch that will essentially open your progression at the bottom of the stages; in others, you can’t move forward until you find a switch elsewhere in the stage.

That said, it really isn’t that deep. I guess the complaint I’d have is that in one of the stages, the directions where you could go were a little bit too vague, and I spent a while trying to figure out the way forward. But honestly, so long as you have eyes, you’ll find the way to go pretty quickly; it shouldn’t be too difficult.

The gunplay is also pretty straightforward. You don’t have to worry about ammo much because the game provides plenty to make you forget about it. The game’s also pretty generous with the in-game currency, which you can use to buy some neat hats and different versions of your weapons.

Warhammer 40K: Shootas, Blood, & Teef also has its fair share of boss fights. Some of them are against monolithic-sized enemies that will take some punishment. At first, they may seem like a big threat and a nail-biting challenge, but they kind of fall flat once you figure out their patterns.

I guess this is where I start airing my grievances about the game because, for the love of the Orks, this game has issues. Let’s start with the easy one. More often than not, bosses are nothing short of bullet sponges that take a long time to kill but don’t do much to threaten your existence. The same could be said about the enemies, to be honest. Because while they can swarm you and kill you, they aren’t that hard to kill so long as you know what you’re doing.

I’m guessing the developers pelt you with so many enemies because of the game’s Multiplayer portion. This game can be played cooperatively with up to 4 players. The gameplay becomes a chaotic mess in which bullets and particles are flying across the screen while you basically try to hope that you’re not falling off a cliff or something.

As one of my friends who helped me in the multiplayer said, the amount of chaos going on all the time makes it rather easy to lose yourself. Not to mention,  the enemies don’t stand out enough from the background, and if they do, there are too many superfluous effects to see them properly.

The gamepad controls can also be somewhat counterintuitive to use, at least on the defaults. I mean, what kind of control scheme maps a dash button to a button that isn’t the shoulder button? You also gain access to a weapon wheel that requires input from the right analog stick and a face button, so you have to awkwardly perform this process just to change your weapons. This game is definitely made for the PC  with KB+M controls.

That’s without mentioning the technical problems this game has. The game froze up multiple times during startup for me; it had some frame drops (and I refuse to believe they were my fault as I run a 3070/RYZEN 7 PC), and worst of all, I even had instances of literally falling through the map and out of bounds, falling into an endless void that only stopped once I force closed the game.

The online aspect isn’t any better. I must mention that I played with friends who helped me review this game outside of Shootas all the time, and we nearly have no connection issues. In fact, they had joined me in previous reviews, such as when we did TMNT: Shredder’s Revenge, and we played other games like Sonic Battle R and Ultimate Chicken Horse with no issues with the network connection at all.

Here? Nuh uh, your connection can either be the best, or it can fall off a cliff. I died for no easily conceivable reason multiple times. Sometimes, it can be because I got hit by an explosion or a melee attack from my comrades - After all, for some reason, friendly fire is enabled with those -. In other cases, the game lagged and made us have a miserable time.

In one of the worst instances of glitches happening, one of my friends ended up locked out of an entire boss battle section. Because of this, we were soft-locked once we died because you spawn next to where the friend unit is when you die and get revived. In other words, we spawned outside of the boss area.  We had to explode ourselves with the grenade launcher so we could restart from the nearest checkpoint.

While I rambled about how janky and unpolished this game is, Warhammer 40K: Shootas, Blood & Teef is still a fantastic time. The game’s bombastic soundtrack and the variety of weapons at our disposal are so good that my friends and I completely ignore many of the game’s shortcomings. Plus, it’s fun to be part of the chaos.

By this point, I couldn’t really explain much else about why this game is good for you. So long as you’re willing to turn your brain off and accept the jank that comes with the online multiplayer, this game will be simple enough for you to understand what’s going on. So, gear up and put your hat on. It’s humie-killing time. 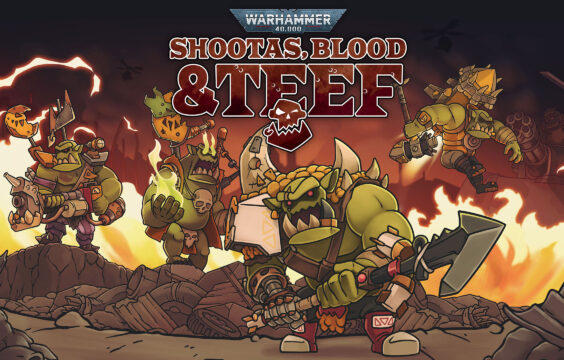 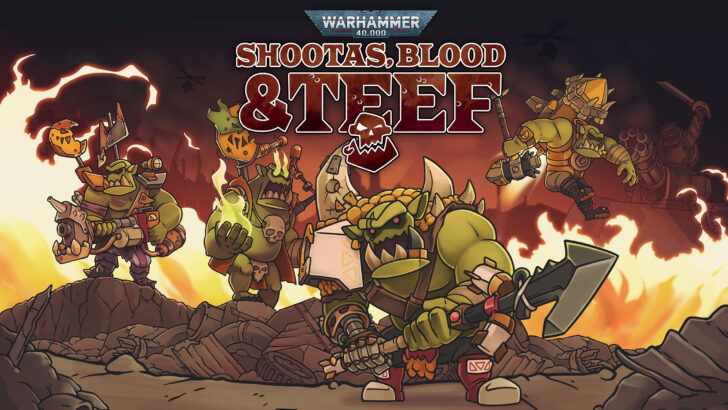 Warhammer 40K: Shootas Blood & Teef is a great game if you are in for some mindless fun alongside your friends. Its variety of weapons can be fun to engage with. While its campaign is short, you can still find enjoyment in the PvP mode or try new weapons with your friends.