I assume I’m not the only one who thought Steel Rats looked a lot like Trials. It was obviously different, with a more consistently steampunky feel to the world and the even more obvious single player focus, but I thought it would feel similar. I was expecting the same precision controls, comical accidents and overwhelming speed.

But Steel Rats, with its gruff bikers and steampunk robot enemies, actually feels more like LittleBigPlanet. While you meet be whizzing across a ruined and slightly bizarre America, none of it feels as precise or energic as Trails. There isn’t much punishment for failure, and the actual challenges aren’t nearly as tricky as Trails. 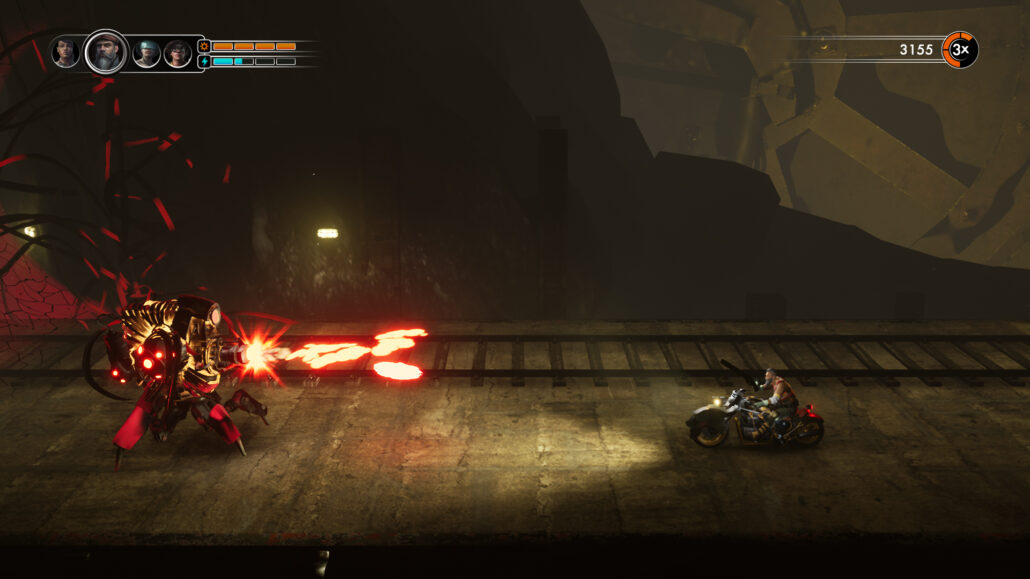 Instead of insane jumps with very clear win conditions, you travel across the screen, while pulling your bike towards or away from the camera. This 2.5D effect has had awkward issues since it was first implemented way back then. Traversing narrow ledges becomes less of a challenge and more of a chore as it can be hard to judge your depth on a flat screen. Luckily there aren’t that many ledges in Steel Rats, but there are a lot of obstacles. Forgetting for a second that you can drive through most of them, defeating the point entirely, you might struggle to get past the abandoned cars and pipes without clipping the edges.

Luckily, there isn’t really a punishment for this. If you stop or slow down, you can just start back up again. Unlike games like Trials, where crashing will instantly launch you back to the checkpoint, Steel Rats just stops the player in the track, left to awkwardly and slowly ride around whatever they just hit.

On top of this, the obstacles, jumps and challenges are not at all difficult in Steel Rats. Because even when you land upside down it doesn’t end anything, there’s not much to worry about doing the jumps, or anything else in the game. Big falls and certain special moments will harm you, but that’s about it.

If your health ever bottoms out, you’ll have to swap to one of the other bikers you’ve found along the way, but it doesn’t happen often. The other things that hurt you are the enemies, from small doll-sized robots to the lorry-sized bruisers, you’ll bump into a few different baddies along the way. The smaller bots die by running them over, and only become a threat if you let them overwhelm. Big bots take a few hits and can hit back. Sometimes Steel Rats lets you skip right past these threats, other times it locks you into a locked arena to fight through them. Most of these fights turn the player into a boomerang as you throw yourself back and forth to do bits of damage while careening away from any retaliation.

It might sound like I didn’t enjoy my time with Steel Rats, which is understandable. Taking notes for this review, I didn’t have a lot to say, but what I said wasn’t exactly positive. Nonetheless, I didn’t have a bad time playing Steel Rats. The setting was interesting, with remnants of Americana mix with some strange apocalyptic and steampunk atmosphere. The levels are short and punchy which creates a real sense of progress as you travel. You can quite easily settle into completing one more level quite a few times. 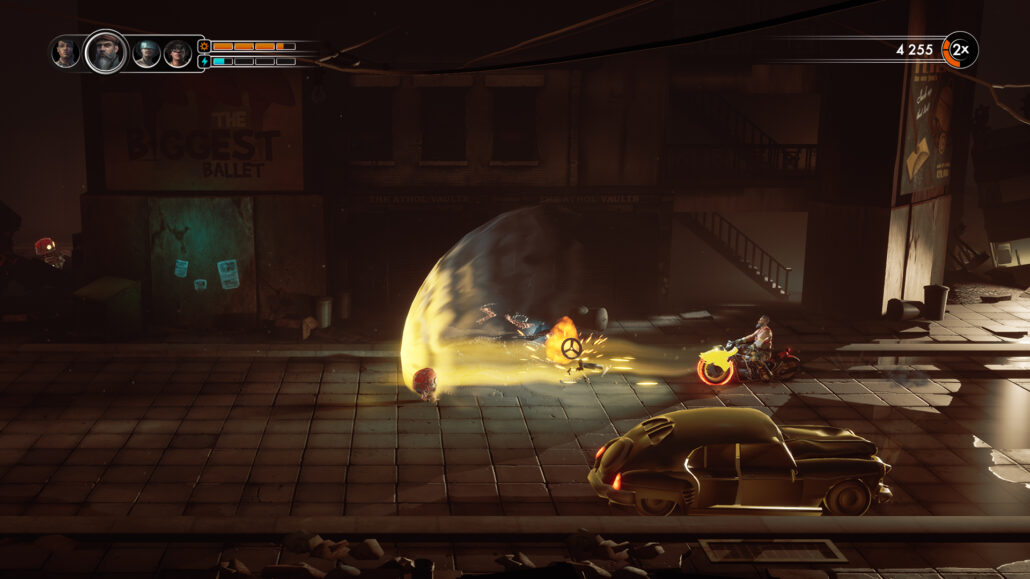 The soundtrack is almost surprisingly catchy and while the characters aren’t much more than the stereotypes they look like, the secrets that fill out aspects of the lore are quite well written and performed. The boss battles and special encounters are just enough to make you take a bit of notice and test your skills more than anything else in the game, even if it still isn’t much.

These positives don’t make the game recommendable though. Released alongside some of the biggest titans of the year, Steel Rats was never going to steal the show. And while I found myself playing Steel Rats more than expected, in the end, I did turn it off permanently (and return to Red Dead Redemption 2). It doesn’t offer anything you can arguably call revolutionary, and what it does do isn’t better than what other titles have done before.

Steel Rats is a perfectly average game. It's enjoyable enough without doing much of anything. It's also interesting enough without being too absorbing.

There is something enjoyable in Steel Rats, but there is a lot it doesn't get quite right. Against the other games of the season, Steel Rats just can’t compete, nor can it live up to the game most people will associate it with.