Griefhelm is a game that combines some of the best aspects of some of the most popular and memorable indie games around. It has an incredible art style, lovely music, and was created by just one person. Unfortunately, despite this seemingly winning combination, something just doesn’t work.

Coming out in 2014, Nidhogg reinvented the comedy multiplayer game as player took the role of opposing duellists fighting in an eternal struggle to see who would receive the honour of getting eaten by the titular worm. It was silly, colourful, and frantic as players had to jab at each other with three positions to hold your sword (or you could throw it if you were a daredevil) and reduced entire rooms to riotous laughter. Griefhelm has taken that same structure, but takes itself very seriously. The colourful environments have been replaced by pretty but sparsely coloured forests and castles, while the simple pixelated characters are now armor-clad knights.

But the combat is still mostly the same if slightly more advanced. Perhaps it would be easier to compare Griefhelm to For Honor than Nidhogg, but the latter feels more essential to the games inspiration and development. Each Knight can swing high or low, and thrust down the middle. Your opponent must make sure they are parrying in the same direction. Battles can be quite tense as you feel out your opponent, baiting them into an attack so they’re open for your riposte. This on its own is fun, albeit with some frustrating decisions.

Knights can also jump and launch their attacks from above. But even if a low swing is flying towards your head, you still have to block low in order to survive the assault. The computer-controlled knights had no problem remembering this fact, while my puny human reactions repeatedly try to block high. The reasoning for the decision is obvious, but it feels like this might divide the player base depending on how you think and react to this game.

The second game that feels like it took roots in Johnny Dale Lonack's (the sole developer) mind while he developed Griefhelm is FTL. Your hedge knight navigates from point to point, progressing left to right across a randomly generated world map. The big noticeable changes Griefhelm compared to FTL is a life system that gives you the chance to fail a few times before you’ll be forced to restart, but given the spontaneity of death in Griefhelm, that is a thankful blessing. One thing that was fantastic about FTL was the variety and storytelling found at each of the stars you would jump to. Sometimes there would pirates, aliens or the encroaching empire, other times there would be strange planets, novaing stars, or something else entirely unexpected.

In Griefhelm, although there are a lot of different types of fights, you will always be fighting someone. Sometimes you’ll be charging across the battlefield exactly like Nidhogg, other times you’ll be overcoming hordes coming from both sides. Other times you might be skirmishing one on one against a hardy opponent, or some strange combination. Despite the variety, it all feels mostly the same. And worse still nothing breaks up the combat other than the world map. There is no section where you won’t be battling away in one way or another and after a while it becomes exhausting to cut down jumping, flailing knights.

There are no choices to make, or worldbuilding to consume. If there is a story in Griefhelm, it is told through vague and frankly pretentious sentences that float around for the moment between each fight. There is none of the intrigue or strangeness that made FTL so much fun to explore, but just more and more combat.

Griefhelm looks lovely though when you get away from the mechanics. The animations of each arm swing are impressive for a single developer and environments are genuinely interesting to run around in as you chase or flee the other knights. It, if you’ll permit me to reference one more game, feels like a little bit like Kingdom, although it lacks the same mood. Griefhelm feels like a game of many parts, and while it has even managed to harvest some of the best aspects of the games that inspired it, none seem to sit evenly with the other. There is something of a Frankenstein’s monster about your time with the game, where everything is a little stitched together because it wasn’t naturally there, to begin with. 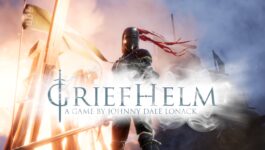 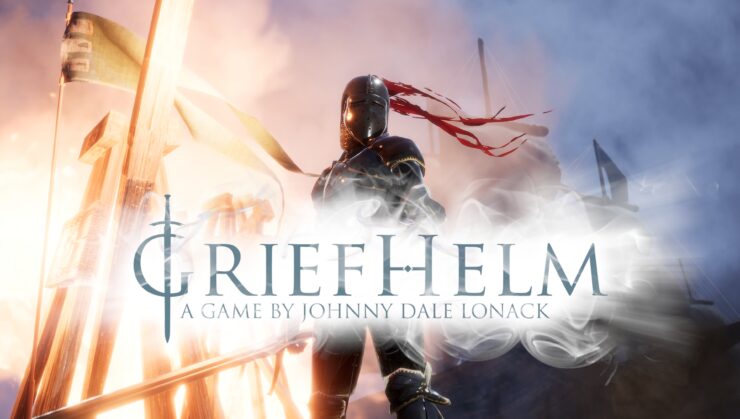 Griefhelm isn't a bad game, but the parts that make it good only work in isolation, not with each other. That drags the whole experience down, however excited you might be for the battles.