Star Wars Battlefront 2 may not be the first game to feature loot boxes, but it has essentially become synonymous with the term. If you really aren’t aware of the controversy surrounding Battlefront 2, I’ll break it down for you: EA chose to capitalize on the loot box system most gamers are used to by tying them into the gameplay. A lot of developers these days only stick to cosmetics when it comes to loot box rewards, but EA decided to make these rewards gameplay related. As a result, the Star Cards (Battlefront 2’s power-ups) you obtain from loot boxes make your characters much more powerful. The more loot boxes you open, the better you become, leading many people to brand the game ‘pay to win’. Right before the game officially launched, EA temporarily removed all microtransactions from Star Wars Battlefront 2 and claimed they would address the issues with the game’s progression system.

This all sounds reassuring, right? Well, disabling the microtransactions may have seemed like a pro-consumer decision on paper, but it didn’t actually change anything for Battlefront 2’s players. EA recognizes the progression system needs to be changed, but my concern is that Battlefront 2 will never receive the patch it needs that’ll take it from being a good game to a great game. I have no doubts EA will change the progression system, however, I doubt it’ll be as drastic as it needs to be. Being shot down by someone who happens to have the best Star Cards in the game is an incredibly frustrating experience. I cannot believe the developers thought this wouldn’t be something the online gaming community would have a problem with. It's important to note that Star Cards are used in almost every aspect of the game (each of the four classes, every hero and villain, and all the starfighters), they are fundamental to the design of the game.

At of the time of writing, the Star Card system encourages players to do two things: spend hours grinding for crafting parts in order to create specific cards and spend crazy amounts of money on loot boxes to earn rewards. So far, the only decision EA have made is to take one of those options away. If Star Cards were removed from Battlefront 2 completely, I know the game would be significantly better off as a result. I think most people would prefer if they were allowed to access all of the content in the game without spending even more money. Maybe.

On a related note, another problem with Battlefront 2 is the lack of progress you make no matter how well you play. Players have now taken to spinning around in their spawn areas just to earn the in-game currency. Why bother trying to maintain a good kill/death ratio while doing the objective when you could literally do nothing and achieve the same result? Aside from ruining the game for everyone, you'll gain the currency and, for some strange reason, you won't be punished by EA for doing so.

I hate that these problems currently plague Star Wars Battlefront 2, because it is an excellent sequel to the 2015 game. Battlefront 1’s horrible Hero Tokens mechanic forced players to go to specific areas to play as the main characters in Star Wars. This has been replaced with a points system, giving players access to the heroes and villains they have unlocked provided they've played well throughout the game. The two standout modes from Battlefront 2 are Galactic Assault, a 20 vs 20 mode where players battle across three eras of Star Wars, and Starfighter Assault where two teams of 12 engage in space dogfighting. Switching from fighting large scale battles on Starkiller Base to shooting down ships on Endor, Battlefront 2 gives fans the refined Star Wars experience they've wanted for so long.

Unfortunately, this is the big issue with Battlefront 2… for every good thing the game does, EA has found a way to ruin it by being greedy. The new points system is a great way to reward players for doing well, but if you want to play as Luke Skywalker or Darth Vader you'll have to grind for hours to unlock them. Galactic Assault can be intense and action-packed, but it depends on how many people are idling in their spawn areas to know whether the game will still be competitive. On the off chance everything is going well with Star Wars Battlefront 2, recently I've been experiencing rubber banding issues which completely ruin the game. These server problems render the game virtually unplayable for the people still willing to give Battlefront 2 a chance.  The rubber banding issues appear to be occurring on every platform, hopefully EA addresses this as soon as possible.

The biggest addition to Star Wars Battlefront 2 is something fans (including Star Wars cast member, John Boyega) have been asking for: a single player campaign. Here you’ll begin playing on behalf of the Empire as Commander Iden Versio, Leader of the Inferno Squad, though you can probably see where that story is heading… The campaign clocks in at just under five hours long, though you could certainly lengthen its duration if you’re interested in locating all the collectibles, particularly if you’re playing on one of the higher difficulties.

From fighting on the ground to engaging in X-Wing dogfights, the campaign feels like a playable Star Wars film, while filling canonical gaps between Episodes VI and VII. Yes, the story is predictable and there are some filler moments that exist purely to lengthen the game, but overall I would say I enjoyed the campaign.

With The Last Jedi DLC set to release in the next few weeks, the campaign will also be warming fans up for the next movie installment. If you’re a Star Wars fan, you won’t want to pass on this experience, especially seeing as it is included in the price of the base game. EA have a four-week plan spreading from launch to the end of December where they’ll be rolling out new content, events and rewards every few days.

Aside from the server issues, the performance on the PC version of Star Wars Battlefront 2 has been very positive. The Frostbite engine has never looked better, and I’ve had no issues running the game at a variety of resolutions while maintaining a solid frame rate. I fully expect this type of performance considering the specs of my PC (Intel 6700k, NVIDIA GTX 1080), but it’s nice to know there aren’t any issues in this regard. A nice feature of the Frostbite engine is being able to switch from keyboard and mouse controls to a control pad whenever you like. This is especially helpful when playing Galactic Assault and you earn enough points to use one of the starfighters. It’s not too difficult to use keyboard and mouse controls while flying the starfighters, but it’s certainly nice to have the option.

Reviewed on PC (code provided by the publisher). You can purchase the game on Amazon. 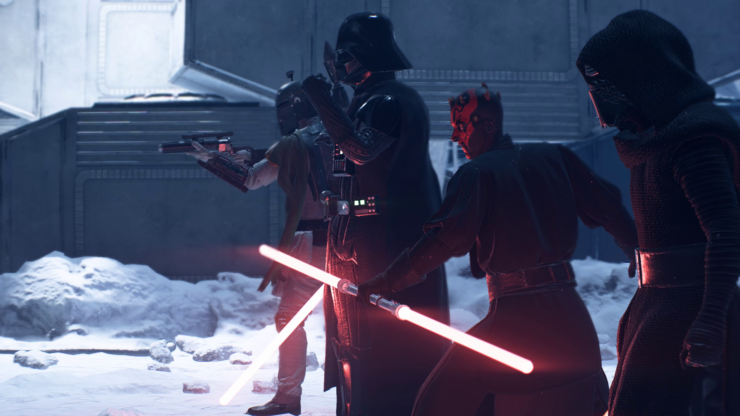