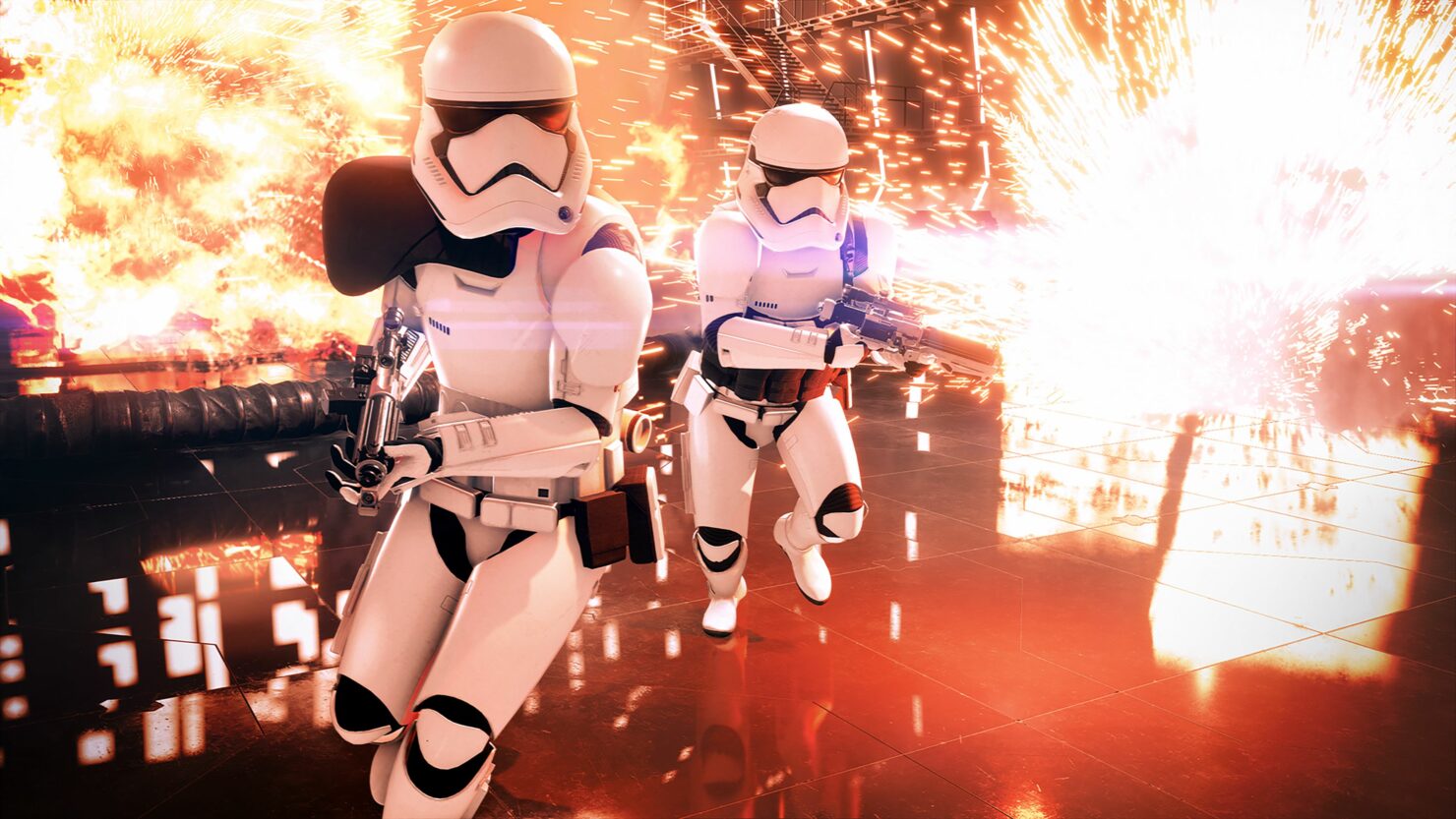 Yesterday was the big reveal day of Star Wars Battlefront II. At the yearly Star Wars Celebration event in Orlando, Florida, the game was announced with much fanfare and accompanied by a debut trailer.

During the esnuing presentation, a few developers working on the game revealed the main differences with 2015's Battlefront. As you're probably aware, the previous title was praised for the stunning graphics/audio and incredible fidelity to the imagery of the franchise, but it was also criticized for its lack of depth and content. It had no single player campaign, no Galactic Conquest and a very limited amount of maps, weapons and vehicles at launch. It was also merely focused on the classic movies (the original trilogy).

That obviously didn't bode well for the game's longevity and Electronic Arts seem to be intent on fixing this particular issue for Battlefront II. First and foremost, a full-fledged single player campaign has been confirmed, starring True Blood and Sleepy Hollow actress Janina Gavankar as protagonist Iden Versio. She is a female Commander of the Empire's special forces unit Inferno Squad (which will also get its own book detailing the squad's backstory) who witnesses the Death Star's explosion while battling the Rebels on Endor.

The concept here is to reverse the usual role of the Empire as the bad guys. Iden Versio grew up on Vardos, a planet described as an "Empire Utopia", and genuinely believes that the Rebels are terrorists and the Empire is needed to maintain peace and order in the galaxy. It's about showcasing the other side, for once. The story has been co-written by Walt Williams, who did a great job on Spec Ops: The Line, and former IGN journalist Mitch Dyer; they've worked closely with the story group at Lucasfilm (which confirmed on stage that the game will be canon). 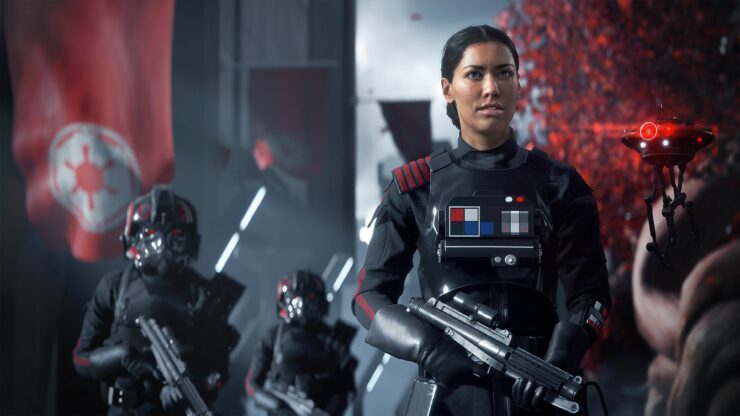 Also, for those who are skeptical of DICE's capabilities to craft a great single player campaign, it should be noted that DICE is only working on Battlefront II's multiplayer while EA Motive is taking care of the story mode. Another highlight is that iconic characters such as Luke Skywalker and Kylo Ren will also be playable, although briefly, in the 30-years-spanning campaign.

Of course, multiplayer has always been the biggest part of the franchise and it won't be any different this time around. Criterion worked to make vehicles more satisfying to control, starting with starships; yes, space combat is available and there will be different role types for ships, including hero ships.

Classes are also making a comeback in Battlefront II. There will be four of them: Officer, Assault, Heavy, and Specialist. You'll find more playable heroes, too, such as Luke, Rey, Kylo, Maul, Yoda, Han Solo, and Vader (more could be confirmed at a later date). If you played the first game, you'll know that they didn't handle very well, but the developers promised improvements that grant the heroes more "physicality".

Even better is the news that both heroes and vehicles won't be tied again to the dreadful power-up system. For Battlefront II, DICE opted for a resource based system where players may choose between unlocking a rideable Tantaun to move faster on the battlefield or wait to earn more resources and unlock a vehicle or hero, as an example.

The game is structured to keep players engaged also thanks to dedicated progression paths for heroes, vehicles (including starships) and basic soldiers. All of these will be upgradeable and customizable for different play styles, which is nice to hear. Finally, it seems like there won't be a Season Pass (though there might be microtransactions for cosmetic items since the Microsoft Store mentions in-app purchases).

Most of the complaints rightly made to DICE's Star Wars Battlefront seem to have been addressed, then, and we can be assured that the graphics (quality and performance) and audio will both be stunning; the Swedish developers never disappoint in those areas.

But there is one weak point of Battlefront that hasn't been touched upon by the developers yet, and it makes me worried. It's the shallowness of the core gunplay experience, which is especially noticeable once you switch consecutively between Battlefield 1 and Star Wars Battlefront (both made by DICE).

The former feels way more satisfying than the latter purely for the shooting mechanics, while Battlefront's gunplay is just too simple to allow for any display of skill. The game is, after all, a shooter and the Star Wars coat cannot remove the need for amazing gunplay in order to be able to call Battlefront II a truly great shooter, regardless of the additional content and features detailed so far for this sequel. 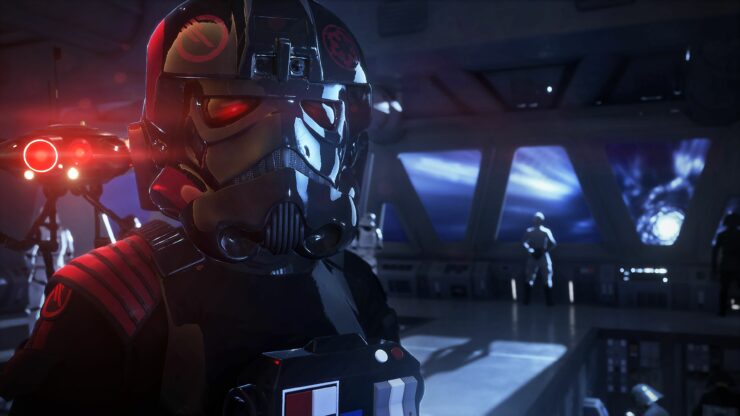 As part of the effort, DICE should also increase the weapon roster while differentiating the guns in Battlefront II, since they all pretty much felt the same in 2015's game. It is also my hope that the two-person buddy system will be removed entirely since it was a ridiculous limit to playing together, whether you just wanted to relax with your buddies or perhaps to play tactically as a team. Even just unashamedly lifting wholesale the Squad and Platoon systems from Battlefield 1 would go to great lengths to fix this specific issue.

Finally, I would appreciate if DICE allowed at least some first-person and third-person only servers, since having both options available favors imbalance and frustration.

What we have seen and heard so far about Star Wars Battlefront II is promising. However, even having lots of content and characters/planets from all the eras won't be enough unless this sequel actually plays much better than the first game.

It's likely that we'll get to see the first Battlefront II gameplay during the usual Electronic Arts pre-E3 conference. I'll keep my fingers crossed until then.