Not even a decade ago, stores were filled with micro consoles filled with various games and rarely any classics. Every year, I’d see CVS shelves or mall kiosks pop up with micro-consoles aimed at kids made of cheap plastic and an even cheaper lineup of titles. These were almost always a grey market affair and more often than not filled with weird NES games by the dozens. It wasn’t until 2016 that we had our first major player enter the microgames console space with an official release: Nintendo and the NES Classic Edition. Since then, Nintendo and Sony have been at odds with their own mini consoles while Sega was notably absent from this miniature console war. That is, until September 2019, when SEGA is about to release their first official micro-console: The SEGA Genesis Mini, or SEGA Mega Drive Mini, depending on your region.

The SEGA Genesis Mini’s design is what collectors of these modern micro consoles should come to expect. Two USB ports adorn the front of the console for the specially designed controllers with ports on the back for power, via micro-USB, and video over HDMI (with an AC brick included in the package). All of this comes neatly in a package with two of the classic 3-button Genesis controllers and a box adorned with the old grey-on-black graphing paper motif that the SEGA Genesis first launched with three decades ago. 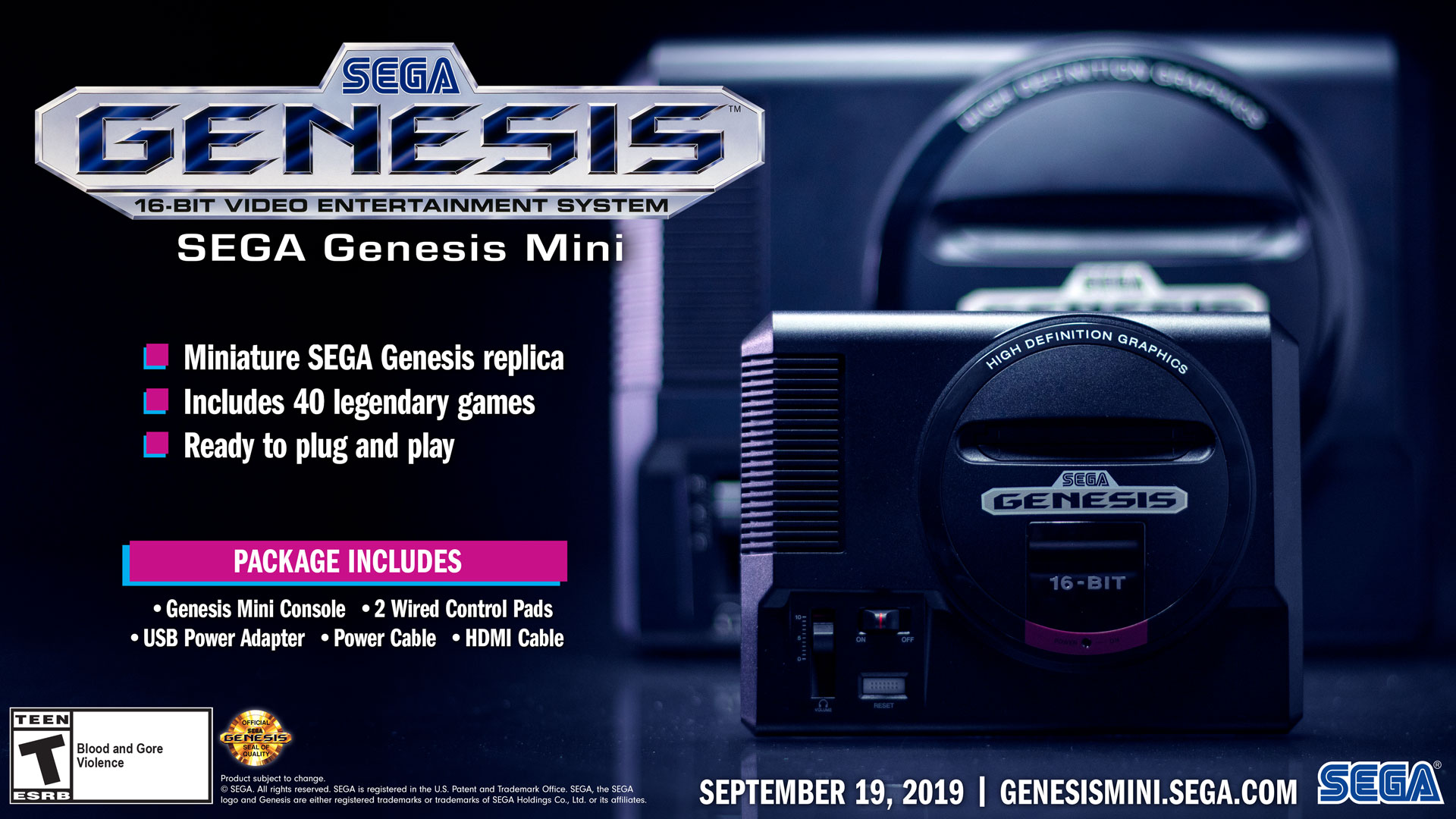 From a design standpoint, the SEGA Genesis Mini might be my favorite of the major four micro consoles. All of the buttons on the Genesis Mini itself are functional, or moveable at the very least. The power rocker switch does exactly what it’s intended for, the reset button brings up the quick save/reset/main menu and the volume slider actually moves up and down. There’s even a little marking on the front of the Genesis Mini where headphones could be plugged in if this was a full-sized unit.

Perhaps most interesting of all is the cartridge slot on top where specially-produced cartridges can be slotted into the top if you happen to pick up one of the special editions available in Asian territories or get a cartridge from SEGA at one of their various press events. Since I wasn’t lucky enough to come across either, I just had to pretend that I had a miniature copy of Quackshot sticking out of the cartridge slot since it was one of the titles I wanted most to be included with the SEGA Genesis Mini that was sadly omitted from the final list of 42 titles. SEGA will also be releasing additional non-functioning addons for the SEGA CD and 32X just in case you wanted to create the infamous ‘Tower of Power’ next to your television. 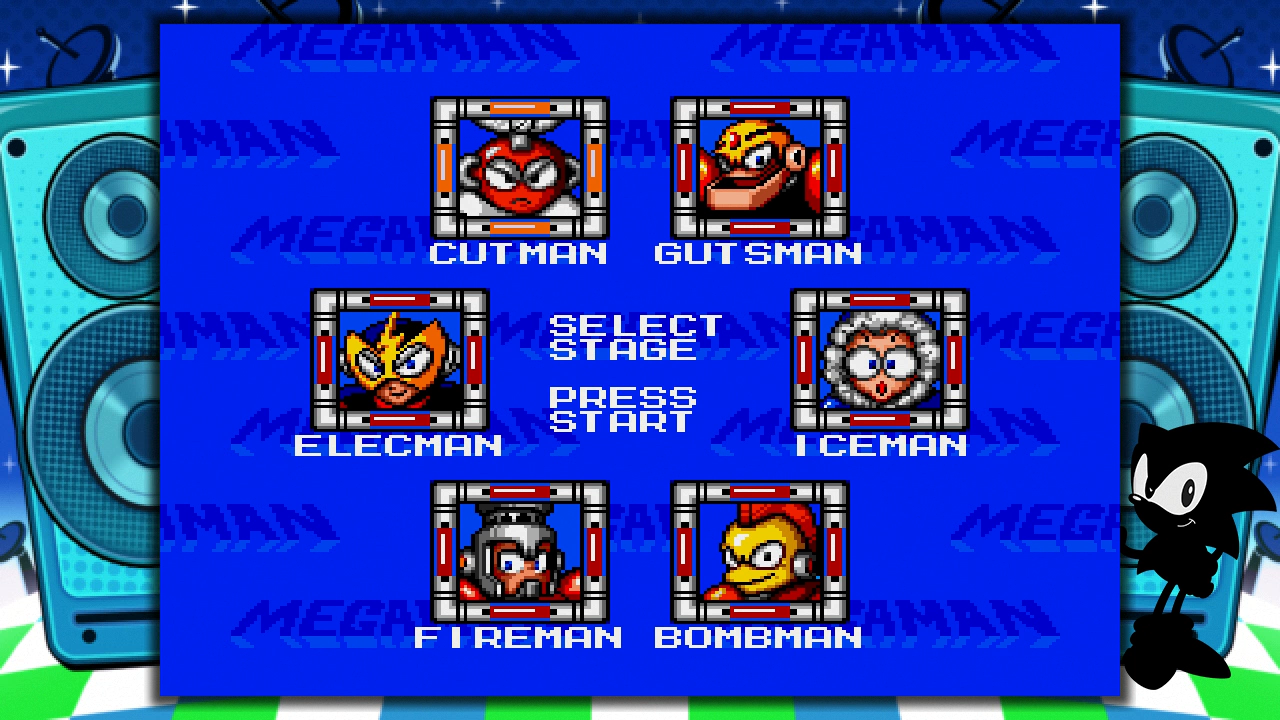 If you’re going to by playing classic games on classic-styled hardware, you’re going to want to play with controllers that match that era of gaming. Included with the SEGA Genesis Mini are a pair of 3-button controllers of the same size and form factor of the very first run of controllers printed in 1989 (even down to the red button lettering from the first controller revision). Each controller is tipped with a standard USB connection and stamped with the SEGA logo on the end, although I would’ve preferred to see SEGA lean more into the authenticity and change up the cable ends to match that iconic plug tip, much like Sony’s attention to detail with the PlayStation Classic.

Compared to the PlayStation Classic’s controller, the 3-button Genesis Mini controller is a bit heftier and sturdier throughout. The backside of the controller as a deep recess where my fingers comfortably slipped into to hold just like when I was a kid playing Sonic 2 in single sittings. All three face buttons have a loud clacking sound to them that should wear off as the controllers get broken in, but when you first pick up a Genesis controller after playing around with the PlayStation Classic, the squishy inputs on the PSX become more apparent. 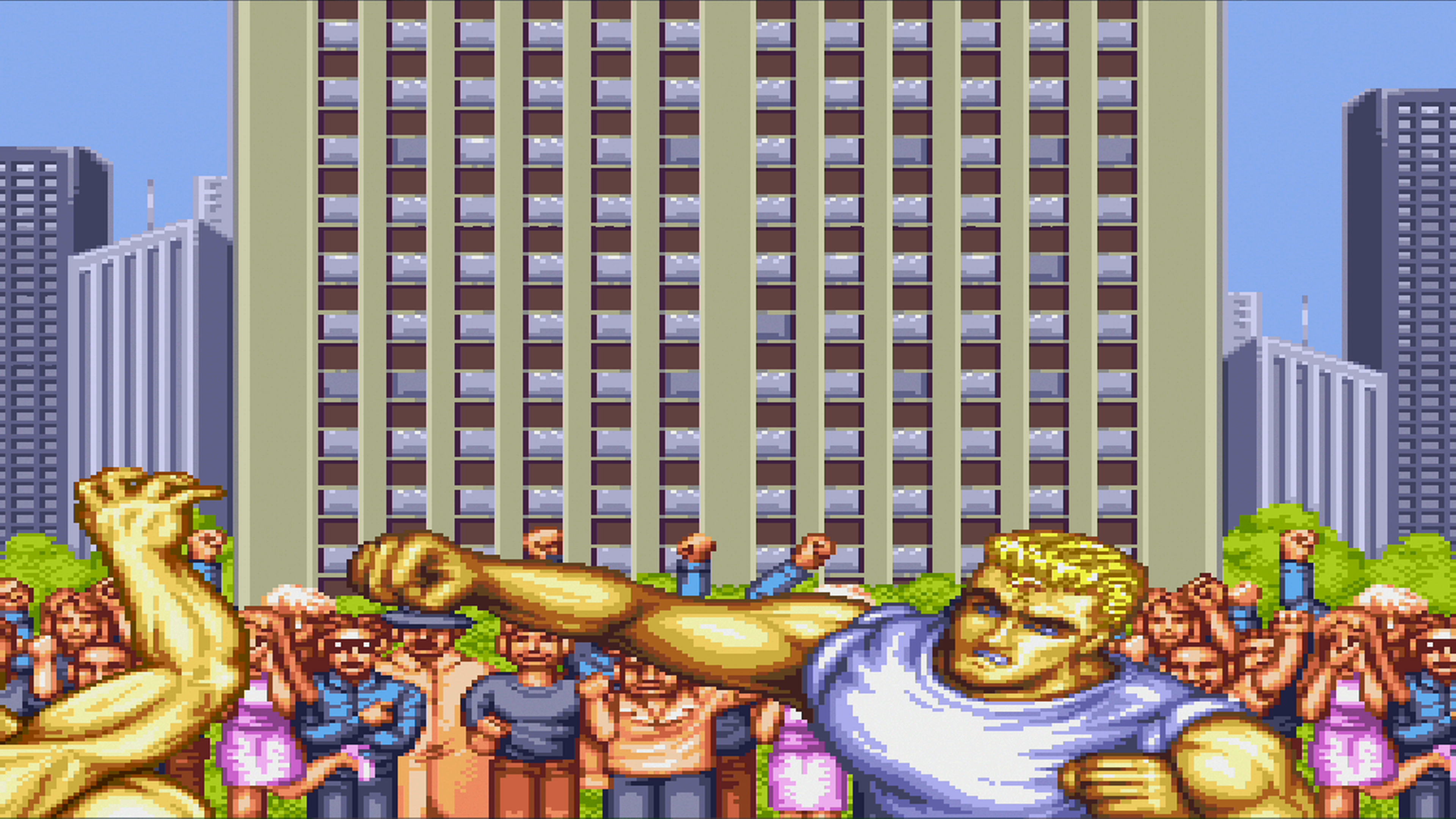 Truth be told, when I had a Genesis, I never had the original Model 1 controllers, so the feel of the very original ‘Batwing’ style controllers is new to me. I grew up with the revised 3-button controllers with the ball bearing inside, so this stiffer d-pad included with the Genesis Mini controllers does have some growing pains to get accustomed to. SEGA certainly nailed it with trying to be as close to authentic to the first SEGA Genesis release but for those that desire control over authenticity, I would advise looking into other replacements for the iconic MK-1650 controller. Of course, this doesn’t apply to those that pick up the Japanese Mega Drive Mini as this micro-console variant includes the newer 6-button controller in the box.

Running a six-button controller is more important than you might initially think for the Genesis Mini. Of the 42 games included with the micro-console, a number of them support six-button control (and play far better because of it). Both Street Fighter II’ and Eternal Champions operate in a very strange control scheme on the original controller: A/B/C are set for each level of punch and you have to tap the Start button to switch over to kicks, making it quite awkward to input more complex combos versus having all six buttons readily available on the updated six-button controller. Other titles like Comic Zone and Mortal Kombat are still playable with the three-button controller, requiring some alternate control methods to play instead. If you can get your hands on a six-button USB controller from the likes of Retrobit or 8BitDo, I highly recommend that being your first upgrade to the SEGA Genesis Mini to get the most enjoyment out of the console. 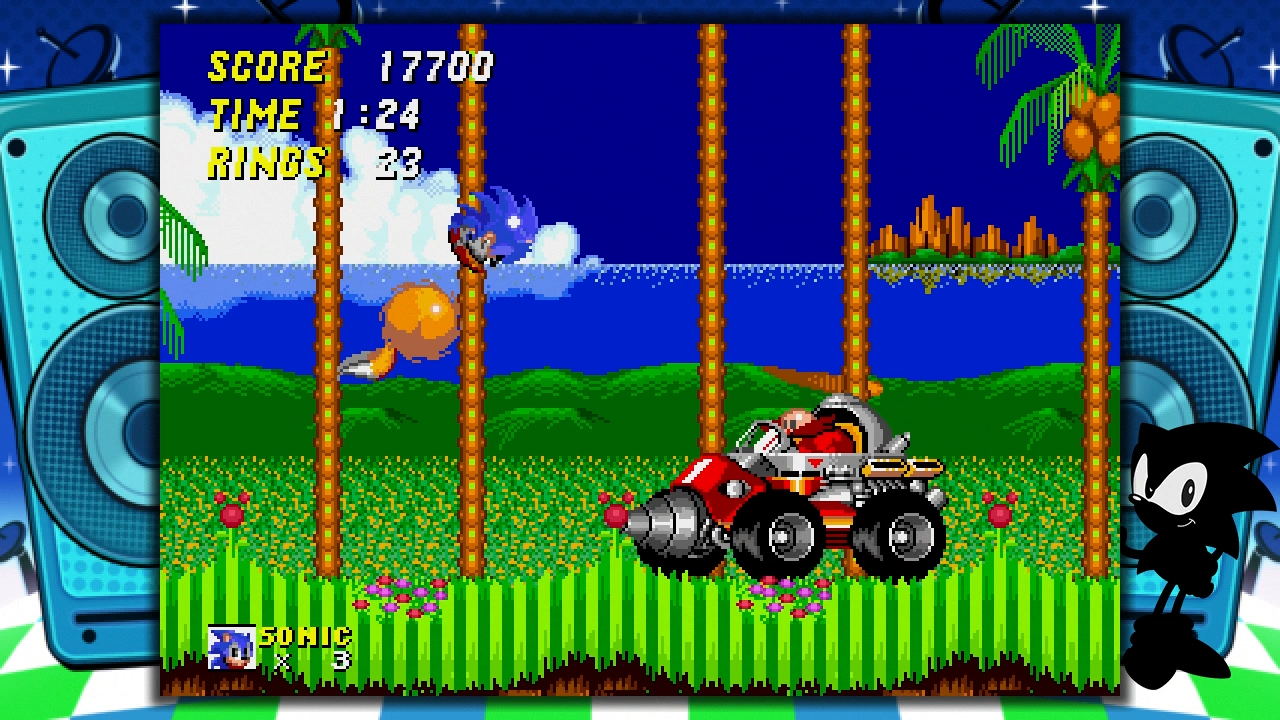 The SEGA Genesis Mini’s presentation is simple yet functional. All forty-two titles are readily available from the moment you turn on the console and can be sorted by alphabetical title, genre, the number of players, and release date (no option to favorite titles and put them at the top of the list). Tapping the B button lets you switch the menu over to spine view so you can fit all 42 titles on the screen and choose between them quickly. The settings menu is similarly barebones with options for language support and whether you want to choose from one of three wallpaper designs as you play. Screen settings only offer two modes whether you want a 4:3 aspect ratio or fullscreen stretched display. Either mode can support an optional CRT filter by pressing the C button in this menu. This menu is only accessible from the main title screen, so you won’t be able to adjust the display ratio in-game without first saving your progress and closing the game.

Each game has their own separate quick save menu with four slots, so you won’t have to worry about someone accidentally erasing your Shining Force progress when they’re playing Strider (and this save data can be locked to prevent accidentally overwriting the wrong slot as well). This can be reached by one of two ways: holding the Start button down for five seconds, or simply pressing the Reset button on the console itself. For games like Castlevania Bloodlines that require a lot of trial and error in the later stages, I found myself reaching for the Reset button far more often than having to wait out those long five seconds via the controller. 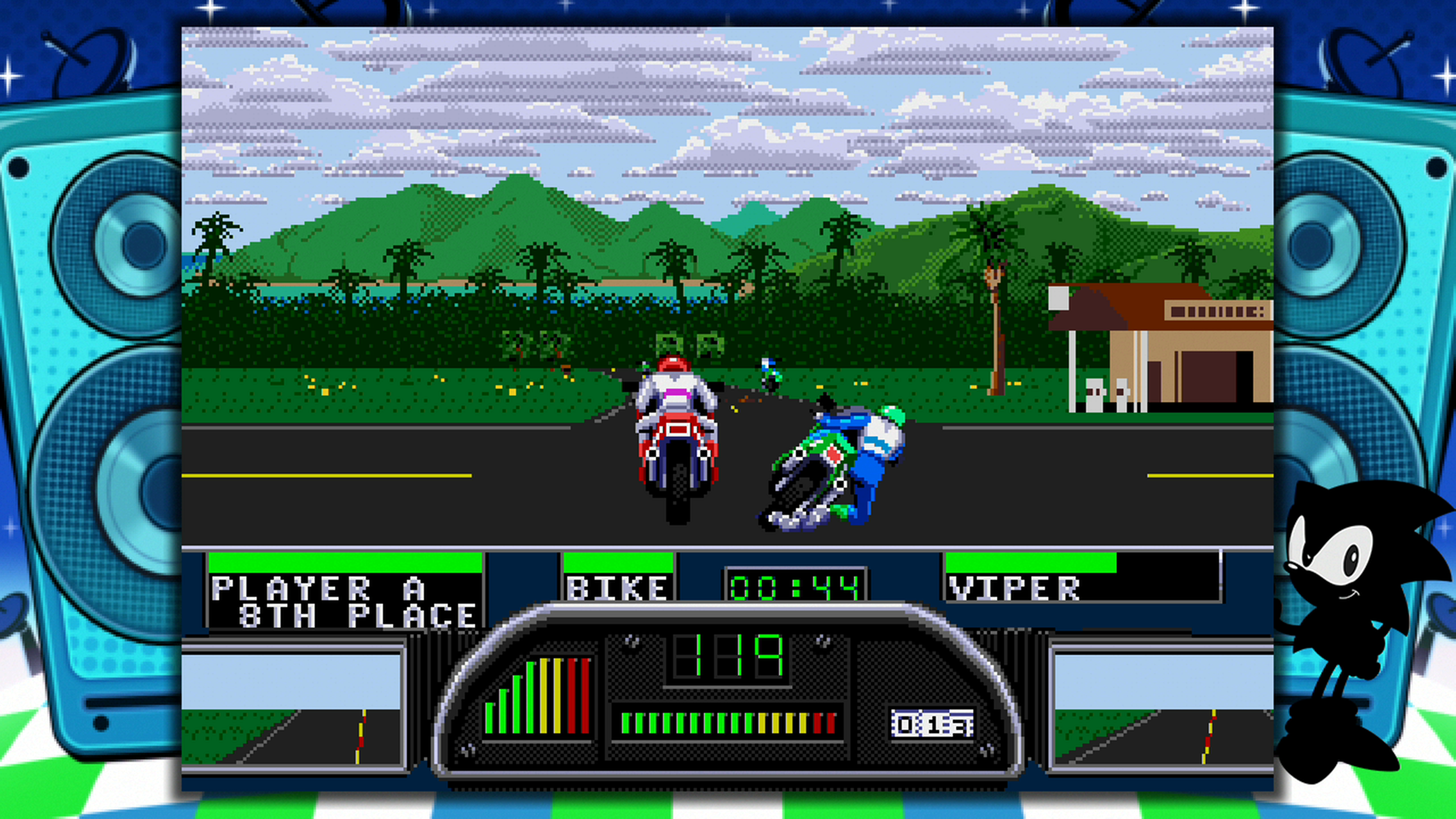 When it comes to actually playing the titles on the SEGA Genesis Mini, not much needs to be said. Each title plays just as I remember them with the same sprite flashes and slowdown popping up in the usual places. Even running through my HDMI capture box and playing on a TV with Game Mode enabled, I ran into no discernible latency issues. Compared to the AtGames models that fans have been less-than-thrilled about for years, the SEGA Genesis Mini is buttery smooth action.

For the most part, the lineup of games for the SEGA Genesis Mini feels similar to the numerous collections of titles that SEGA has released over the past decade. The first two Sonic titles, Golden Axe, Altered Beast, Vectorman, and Shining Force are all titles that I’ve played so many times whenever SEGA releases a new vintage collection. Despite this, the majority of the lineup for the SEGA Genesis Mini contains a great number of surprises. If it wasn’t for Konami’s Anniversary Collection of Castlevania titles, this would’ve been the first time I’ve played Castlevania Bloodlines since owning it for the original hardware. The same goes for Mega Man: The Wily Wars, something I’ve never played before in my life. Among the lineup of titles in the SEGA Genesis Mini, I feel like there’s a wide variety of titles that should appeal to both people that want to re-experience those nostalgic days in front of a tube TV as well as those who wanted to see where Sonic the Hedgehog first got his roots.

The SEGA Genesis Mini is nothing short of a gift to fans who want to rejoin the 16-bit revolution. A diverse lineup and true-to-the-original controllers both help cement this miniature console as one of the top five micro systems on the market. The extra features and GUI wrapper of the SEGA Genesis Mini both lack features of their competitors and stands out as one of the few negatives to discover about SEGA's classic system. Whether you’re in the market for another micro console on your shelf or not, SEGA certainly does what Nintendon’t: a lineup of games that isn’t afraid to shed some blood (and tears) and some of the dirtiest electronic soundtracks you’ll ever hear.

The SEGA Genesis Mini provides a perfect snapshot of the diversity for Nintendo's biggest competitor, and while it lacks features that other mini consoles come standard with, the nostalgic experience alone is worth a replay.