Indie Metroidvania-style adventures aren’t exactly in short supply these days -- throw a dart at Steam’s main page and you’ll probably land on one -- but the recently-released Recompile has still managed to stand out somewhat from the ever-expanding crowd. This is partly because Recompile is the rare indie game exclusive to next-gen consoles, but even without that, the game’s slick visual style and fun “repair a computer system from within” premise probably would have turned some heads.

So yes, Recompile has some eyes on it, but the standard for these types of games has never been higher. Can Recompile hang with the best the indie scene has to offer or does it need to unlock a few more abilities before it can open the glowing door to success? Time to see if this one can hack it… 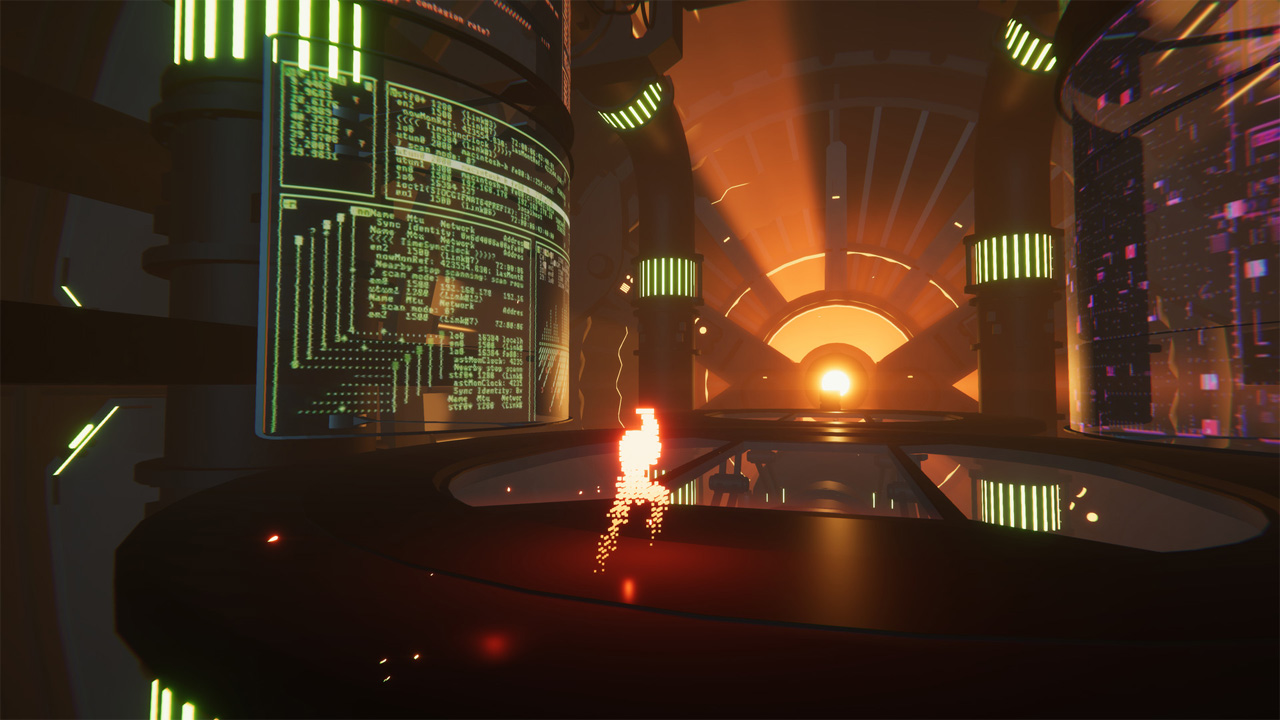 Recompile casts players as a plucky program tasked with infiltrating and repairing an ancient mainframe represented as a colorful Tron-like 3D world. The computer is run by an advanced, seemingly sentient artificial intelligence known as Hypervisor, and as you explore this digital world, you’ll uncover a revealing series of chat logs between various scientists and the AI. Slowly you’ll begin to piece together the true purpose of the computer you inhabit… and how everything went wrong.

The idea of AI run amok isn’t exactly a new one, but it is well-handled here. Hypervisor isn’t warped by any malicious villain, but by the everyday laziness, carelessness, and ego of the scientists working with it. Recompile is an interesting study of how even noble endeavors can easily go wrong and how dangerous sentient AI can be, even in the “right hands.” This is one of the rare adventure games where collecting all the text files is actually worth your time. 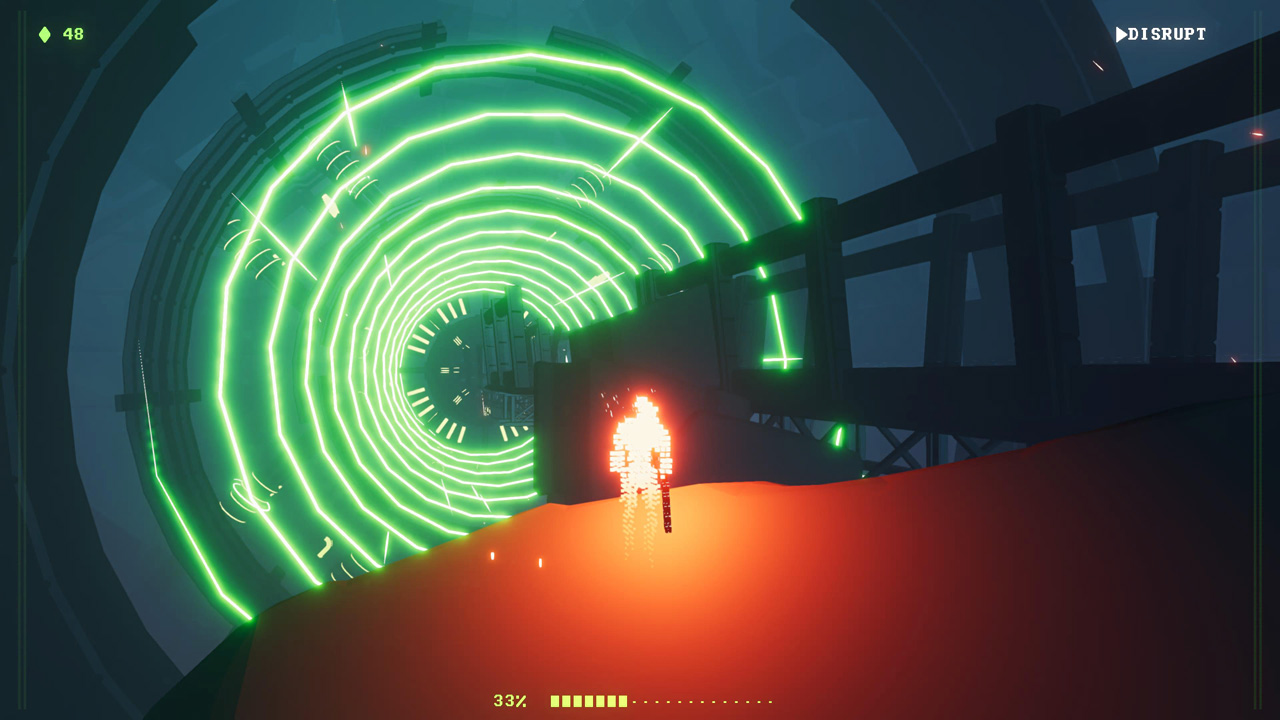 In terms of gameplay, Recompile sticks closely to the traditional Metroidvania format – you explore, solve the occasional puzzle, and collect abilities to open new paths forward. The game offers a certain amount of open-endedness, as the game allows you to choose between several areas to explore first, although there’s definitely a preferred order you should do things in. For instance, the red “TET” area contains almost all the game’s weapon upgrades, as well as slow motion and dodge abilities, which combine to make combat tolerable. Don’t tackle this area first and you’re a constant sitting duck and the game’s bosses are all but impossible. Breaking from the preferred path doesn’t feel like a genuine choice so much as a special achievement for hardcores. 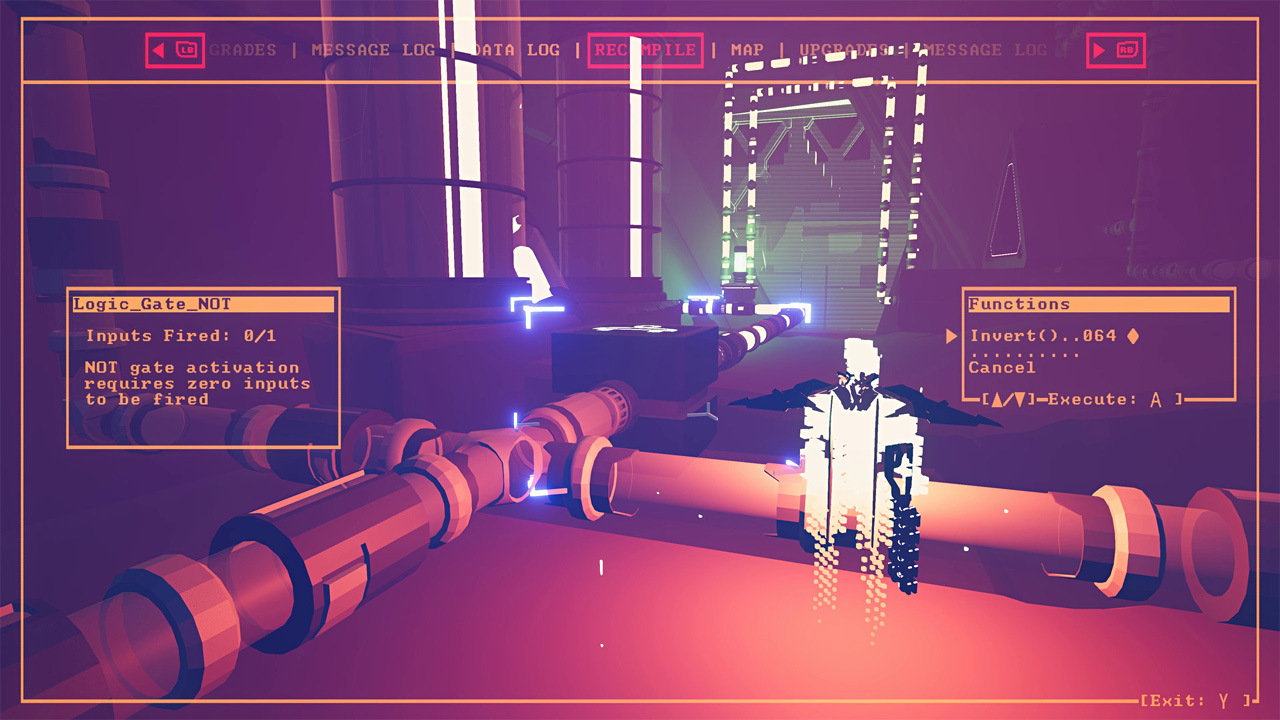 Recompile just doesn’t do a great job of communicating its ability gating. From Metroid’s color-coded doors onward, there’s an art to guiding players forward while making them feel like they’re figuring it out themselves. In this game, you’ll often find yourself stuck and unsure if you need a new ability or just aren’t seeing the solution. When gaining a new power that “Aha, I know what this is for!” moment of gratification is often lacking. The game also makes the crucial mistake of depowering players too much at the start of the game. Samus eventually becomes a badass in each Metroid game, but she’s fun to play as right from the get-go – the same can’t be said of Recompile. Again, combat isn’t any fun at all until you’ve collected multiple upgrades. The same could be said for platforming. Often when I got a new ability my reaction wasn’t excitement, but irritation that the game had forced me to do without to that point. 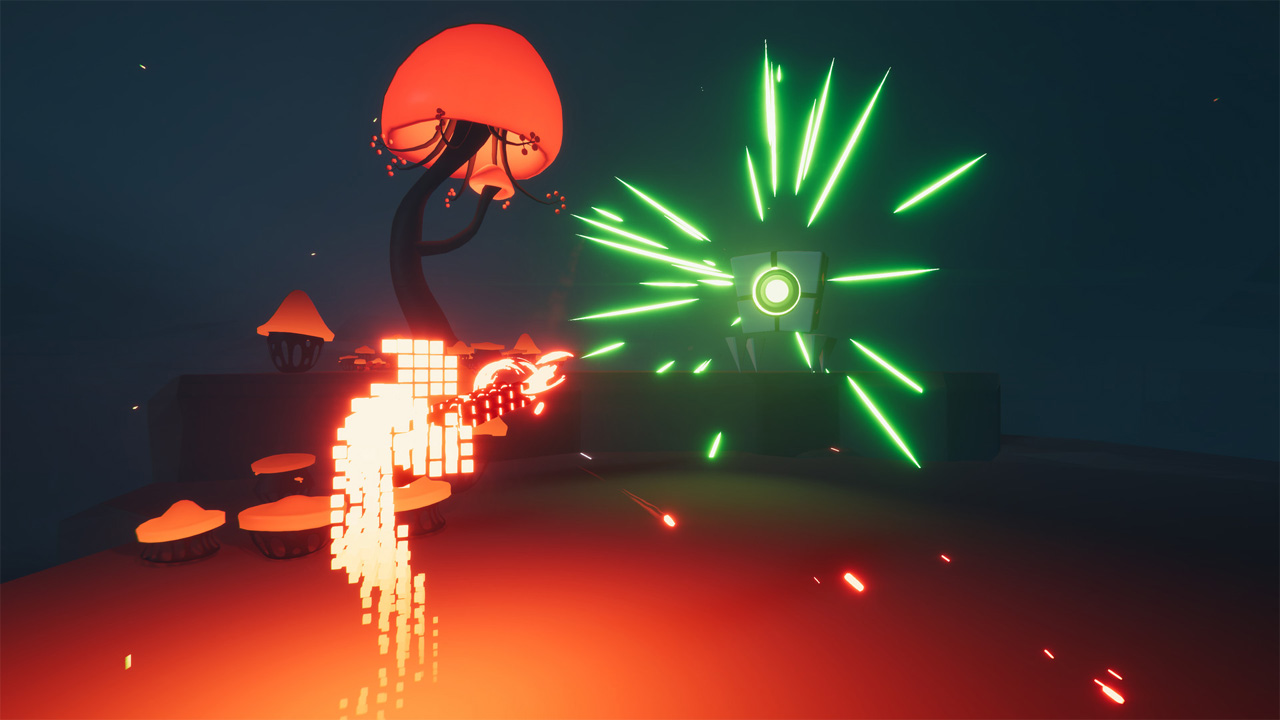 Perhaps I was just irritated in general, as Recompile’s issues go beyond the structural with a variety of basic gameplay shortcomings. Aiming during combat is way too finicky with no option to adjust its sensitivity, hacking puzzles are poorly explained and heavy on trial and error, and bosses are unbalanced, with lots of unpredictable one-hit-kill attacks. Worst of all is the game’s platforming, which commits every sin in the book. It’s difficult to gauge where you are in relation to platforms, your jumps feel floaty and inconsistent, and you’re constantly walking into hidden gaps and pitfalls due to wonky camera angles. As a final kick in the pants, some of the later trickier platforming challenges force you to watch your avatar sloooowly…falling…for…several…seconds every time you miss a jump.

At least Recompile looks nice, with crisp neon-tinged visuals and a unique theme for each area. That said, sometimes the atmosphere is laid on too thick, making exploration and platforming more difficult than they need to be. The game is also missing a few technical bells and whistles – I don't believe the PS5 version of Recompile supports HDR, which is a pretty major oversight given the game’s visual style. 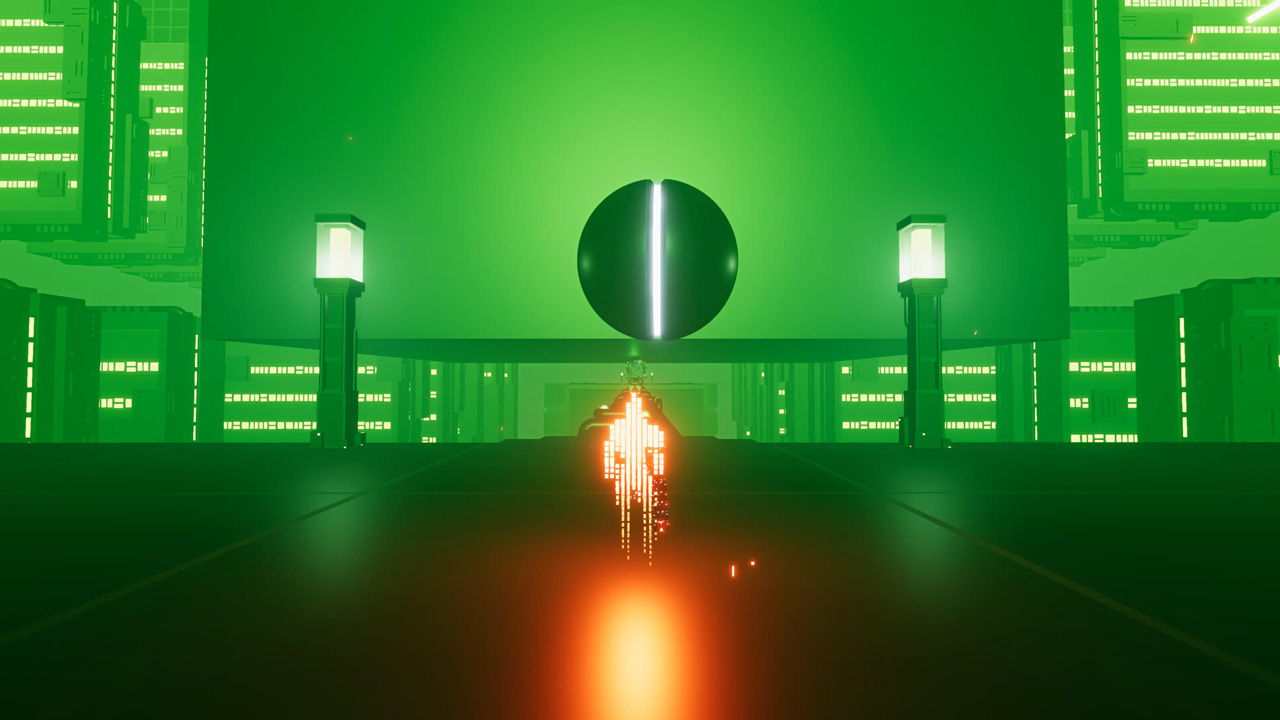 There are definitely moments when Recompile gets in a good groove. When its visuals, sharp writing, and ambiance combine to create a certain unique vibe. Unfortunately, the game just can’t seem to string these moments together, with various annoyances frequently interrupting the game’s flow. Then, just as you’re feeling like you want to quit (the game backloads all its most frustrating platforming sections) Recompile is over. The game can be completed in 6 or 7 hours and isn’t really as reactive as the devs have promised. There are multiple endings, but they’re mostly just based on what percentage of the game’s collectibles you managed to grab. If you want the best ending, you can spend an extra 2 or 3 hours in Recompile’s mainframe, but ultimately, the game will likely be deleted from your memory banks rather quickly.

This review was based on a PS5 copy of Recompile provided by publisher Dear Villagers. You can grab the game for PC at a small discount on Steam.

Recompile is stylish and well-written, but its messy Metroidvania structure and clumsy platforming corrupt what fun it might have offered. Maybe this game would have been easier to recommend a decade ago, but in a world where Hollow Knight and Axiom Verge exist, and an actual Metroid game is coming out in around a month, Recompile just isn’t up to code.