It was nearly fourteen years ago that I fell in love with a lovable little Lombax called Ratchet and his sentient robot friend, Clank. There was no doubt to me that the characters would gain their fans and live on for a decent amount of time, if taken care of and given the right games to push them forward. While not always successful, having a few mis-hits with games like Gladiator, Size Matters and All4One, this re-imagining offers you the game of the film that's based on the game and also reboots the whole franchise.

It's worked out fantastically, to tell the truth. It's rare that you see a tie-in to a film that works so well, but what helps Ratchet & Clank shine is that it's so obviously aiming to be a game first and that the story of the film is tied so closely to that of the original game that it never strays too far. Not too much needed changing and, thanks to that, Ratchet & Clank stands up as a great reboot for what was an excellent franchise.

The main reason that Ratchet & Clank proves to be as good as it is, and so refreshing, is for a few core reasons. What happens to be the main reason is that this is a return to classic R&C, taken from the mold of the original game, with select changes, like weapon leveling, from later forays. It makes for a game that both plays it safe by working with what has a proven track record while feeling fresh because there's so few competent action-platformers around in a genre that has stagnated over the years.

What also helps a great deal is that the story, while based on the film, doesn't differ too far from the original and the changes streamline and enhance, rather than detract from the experience. At least this matter is highly subjective, with some fans on message boards not entirely happy with the changes. For me, the fact that Ratchet & Clank aren't constantly having a go at each other for a large part of the game makes a good deal of sense; the inclusion of Dr. Nefarious, The Galactic Rangers and Ratchet's urge to join them made sense in the long run, rather than him being just a Lombax turned instant hero through sheer chance alone.

Ratchet & Clank also keeps so much of what made it endearing to the fans. The voice actors have been kept the same, returning to the game and also in the film are the voice actors of Ratchet, Clank, Qwark and Dr. Nefarious. As such, the comedy, which has always been hit and miss, still feels the same being delivered by the core cast we've known since 2002. I'm more than happy to say that it had me laughing a good few times.

Working alongside how fun the story is, the gameplay works and ramps this up to an even higher level. A variety of weapons from previous games make a return, sixteen in all but one, The Bouncer, being locked away for pre-order customers only. The fifteen weapons you do get to use, assuming that like me you didn't preorder it, will offer a huge variety from letting you blast away enemies with the rockets fired from the Warmonger, zap them with your Plasma Slayer or simply turn them into animals with the Sheepinator.

All of these weapons can be leveled up as you kill enemies, increasing their power, and even further enhanced using raritanium gathered around the world or dropped by enemies. Further enhancements and the ability to unlock the omega versions of the weapons come through trading cards, also dropped by enemies or found throughout the levels. Nine of these cards are also unique and are used as a part of a side quest, spanning the game, to unlock the RYNO which, as always, is the Ratchet & Clank superweapon.

The problem with such a big selection of weapons is tied to the game's demanding nature that you use them all. Even if you're not interested in going for the trophy for leveling them all up, you'll still end up needing to use them as ammo drops are conservative, to say the least. Even increasing ammo capacity through raritanium upgrades only brings so much relief, which means that eventually you will have to use some of your least favorite weapons. Swapping to these weapons is also a minor inconvenience, which breaks into the flowing gameplay, as only four can be set to a quick-select option - the rest require you to open a menu.

Not everything is run and gun, with the game bringing back the always enjoyable rail-grinding, though not to any sort of level as before, them seeming quite quick and very sparse. Two hoverboard tracks feature, both offering three levels of difficulty which are always very easy to complete, even on the most difficult levels, though always offering a nice little break from the action.

Clank, as always, gets a few of his own sections that offer a little bit of a respite from the action. These are little puzzle oriented areas where you throw special robots around while making sure that you give them the right function to be either a bridge, battery or springboard, to let you get past the puzzle and into the next area. While none of them are exactly challenging, they offer that bit of a break and don't outstay their welcome, meaning that they act more as a way to get you more excited to get back into the action.

The real joy of Ratchet & Clank is that it proves something that I've been arguing for as long as I can remember: It doesn't have to be miserable and brown. While I'll always be a fan of games like Fallout, Pathologic and even [PROTOTYPE], games that use the dreary and drab palettes for a reason, it's always a fantastic thing to jump into something as colorful, vibrant and simply beautiful as this game.

The art design is top-notch, offering fantastic models for Ratchet, Clank, Qwark, the countless enemies and other things that appear in the game, even ones that have zero impact and are there as a part of the backdrop. It's the attention to detail that counts and, combined with the colors that accentuate the bombastic action and explosions, it's impossible not to love the game as you fight through a variety of beautiful planets that never start to look the same or meld into one amorphous mass, like so many games fall into with their levels.

This new Ratchet & Clank succeeds for so many reasons, but the main being that It doesn't concern itself with being a movie tie-in, it wants to be one thing: A fun Ratchet & Clank game. There are a number of enjoyable characters, you use dozens of fun and interesting guns that offer such a wide variety and the gameplay mixes it up with the rail grinding, hoverboarding, jetpacking and Clank sections to ensure that you never feel like you're doing too much of the same thing. It does all this while looking absolutely stunning, keeping itself colorful, beautifully designed and a joy to watch and play. 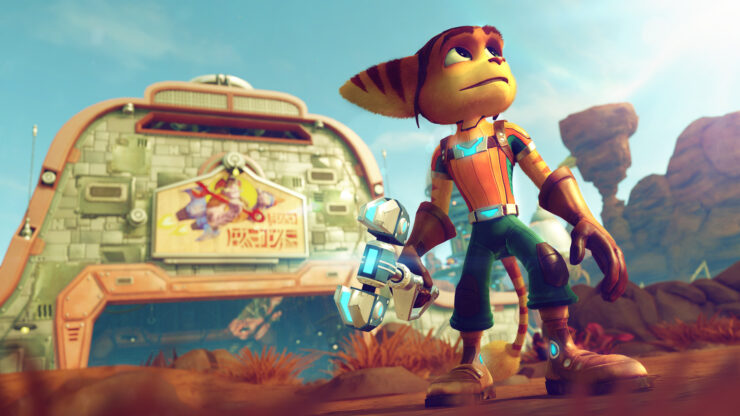 Ratchet & Clank is a fantastic game and a strong return of both the franchise and developer Insomniac, who have done an outstanding job. It doesn't concern itself with being a movie tie-in and, as such, it ends up being a true Ratchet & Clank game, one that any fan will have already played and an excellent introduction to make new fans.