Pride Run Review – What More in the Name of Love?

Do you know what is absolutely lamentable? The fact that games like Pride Run is a game that the major sites literally always say they support but never do. They put up rainbow images 'to show solidarity', they'll do streams or even sell rainbow branded merchandise (naturally omitting the fact that it's advertising for them). What does this have to do with Pride Run, the game I previewed earlier this year at Gamescom? I'll get to that.

The reason I'm going on this little mini-rant is that you'll find so much lip-service about the supporting of equality for all, but when it actually comes to it, people and sites back away. It's certainly nothing to do with views, they're happy to cover news of games that are undeniably going to draw less than titles such as this. In an interview with Gamesindustry.biz last month, Ivan Venturi had this to say in regards to the matter:

a lot of people and journalists say they support the LGBTQ community -- yet at the end of the day, they are scared of losing unique viewers. Honestly, we didn't expect so much resistance.

Following my criticism of nearly every other games-related website on the internet, I think it's time to talk about Pride Run, a game that wants us to all get along and have a bit of fun. 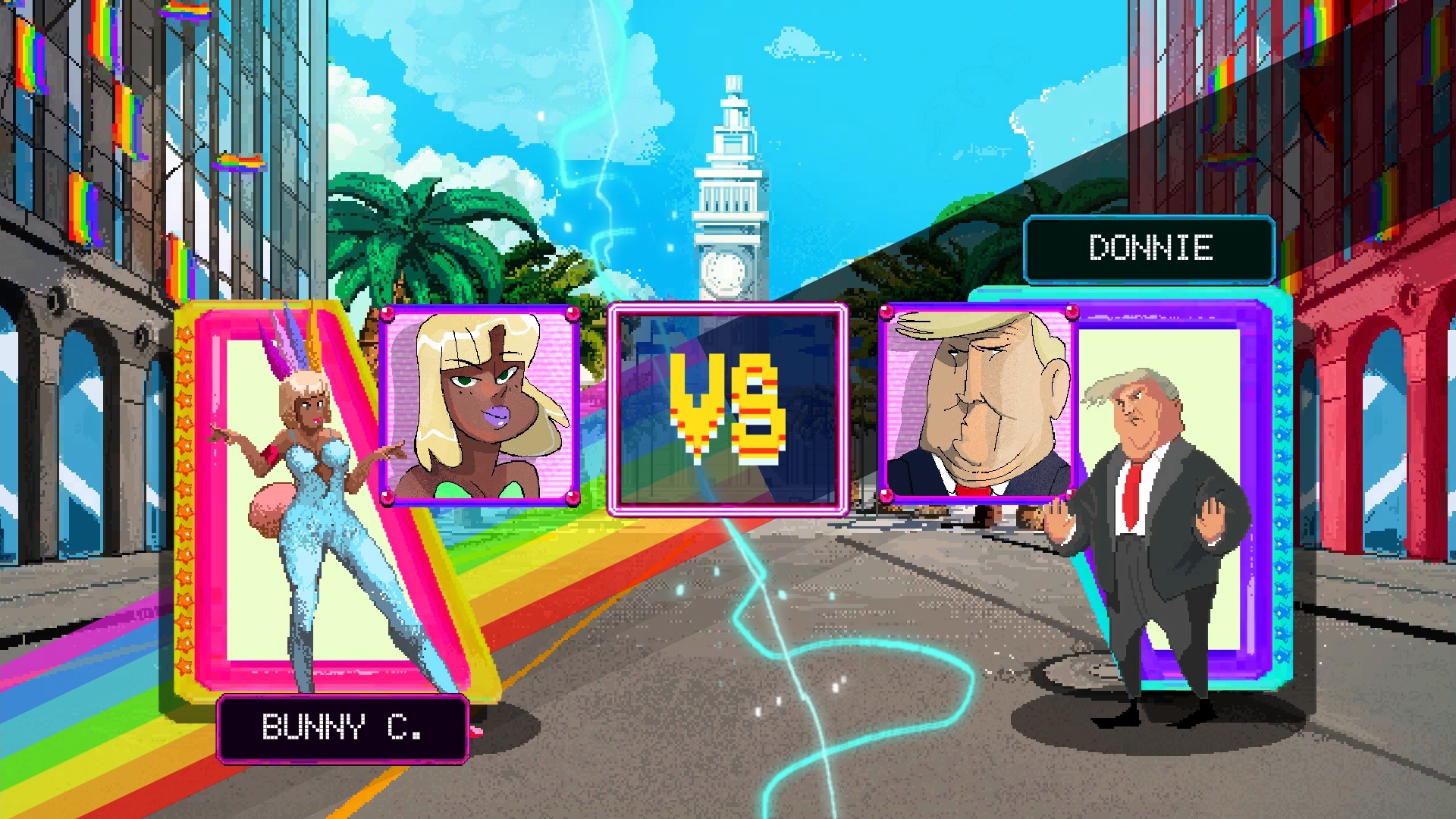 So what exactly is Pride Run? It's a rhythm-action game, or rhythm-action strategy game depending on the game mode, that was created to support LGBTQ+ and promote pride marches throughout the world, as well as ones the developers at IV Productions wish would happen. It's all in an incredibly colourful, exceptionally detailed and techno-oriented musical package. It's designed to make you happy and to make you smile, there are aspects that will do that.

First and foremost are the design choices made here. Pixel art is en vogue right now, it has been for a few years really, but the games that get it truly right are few and far between. Matching up with the outstanding detail of titles like Dead Cells and Hyper Light Drifter is the somewhat more colourful Pride Run. Here, the game has created to the smallest detail a variety of LGBTQ+ stereotypes, opponents, fans and the environments the pride parades take place.

While not like-for-like depictions of these places, the environments are exquisite and final enemies of a level either befitting of the area or simply comical. Let's keep it simple, the boss of Toronto is a Wendigo. If that doesn't say enough about the game's sense of humour, nothing will. With the environments, they wanted all of the landmarks and style of a place, so Rome has the Colosseum, Paris has too many to list and so forth. More than landmarks, the game tries to capture the actual essence of the place, from the cobbles of Paris to the greenery of Stockholm.

As for the music, something fairly important in a rhythm game, it's pretty great. Each area has its own style that's slightly amped up for the whole theme of a Pride Run, but each sound different and thematically fitting, possibly even best described as 'local'. Whether the music actually is local or not, I couldn't say, I haven't travelled everywhere yet, but it sounds like it fits. Now if only it completely fit in with the game's mechanics, or they fit in with it. 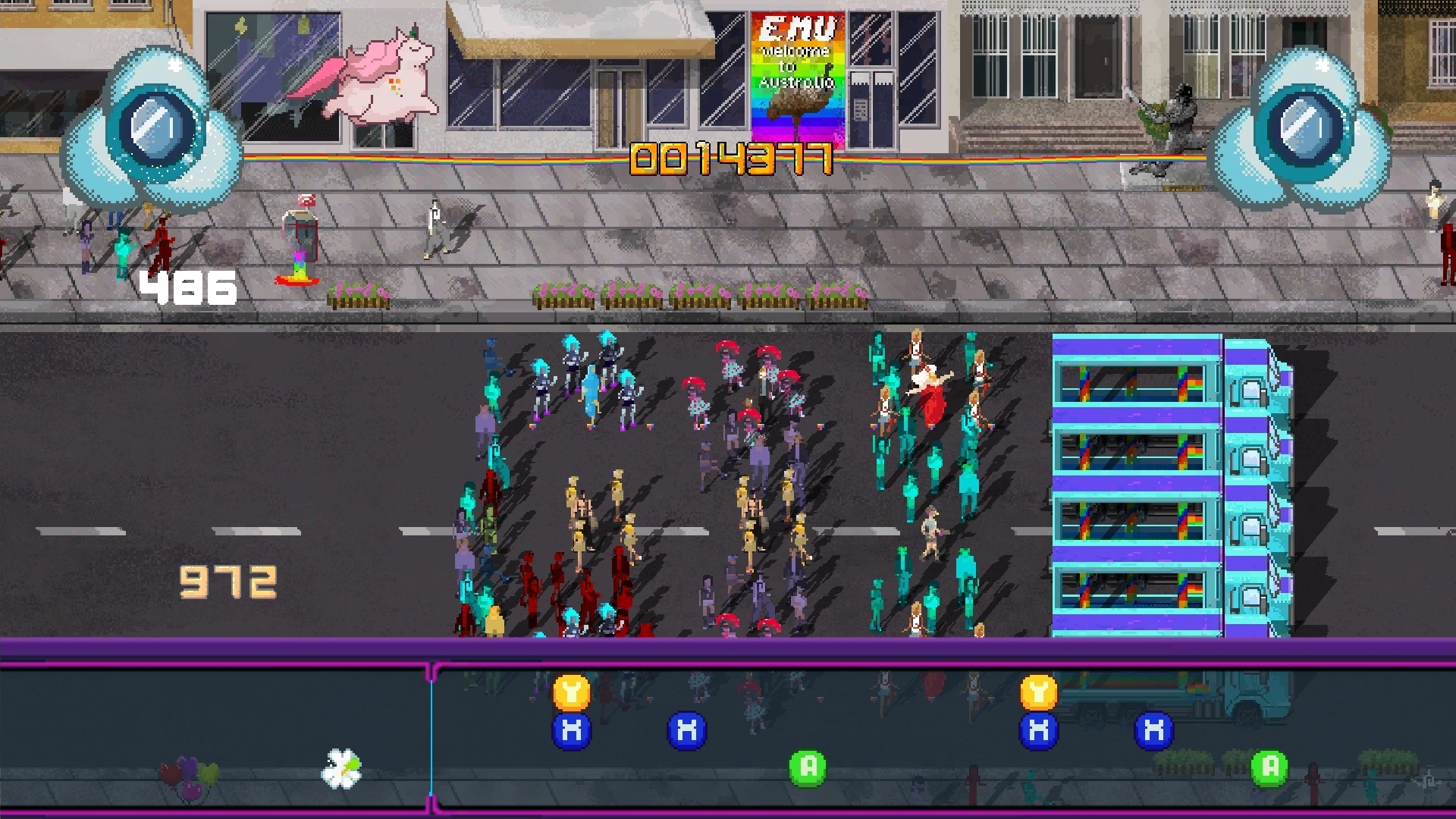 Music and games based around music are all about timing. The problem Pride Run has is that it's just that bit out of time. When you're playing the game in any mode, you have a button to press. So far, so simple. You supposedly press it when it reaches the line. Not quite. I've found that if you press it when the icon is just touching the line, you're going to have missed the prompt. Ideally the line needs to be halfway through and, honestly, I've also pressed the button too late and been successful. I didn't complain when it worked in my favour, I swore when it was working against me. It feels like everything is around a quarter of a second out of time.

What this essentially does, is cripple you. Particularly so if you miss a chain, where you would hold in the button. Why? Because each link in the chain counts as a separate press. However, since you missed the first one, you can't hit any of the others. The screen very rapidly goes grey, all colour is lost and you get a sad Pride Over, with the chubby unicorn - the mascot of Pride Run - evidently disappointed in my inability to follow simple tasks.

This even applies to the boss battles, where the buttons to press are shown on screen but I'll be damned if it accepts the inputs when it should. I've pressed the buttons both fast and slow. It's not only matching the buttons, but it seems you also need to somewhat match the tune. On easier difficulties, the boss battles quizzically seem harder. Harder to input the buttons anyway, they're only really a challenge on the most difficult of settings. Either way, I love seeing Trump in drag or the broken remains of an internet troll. 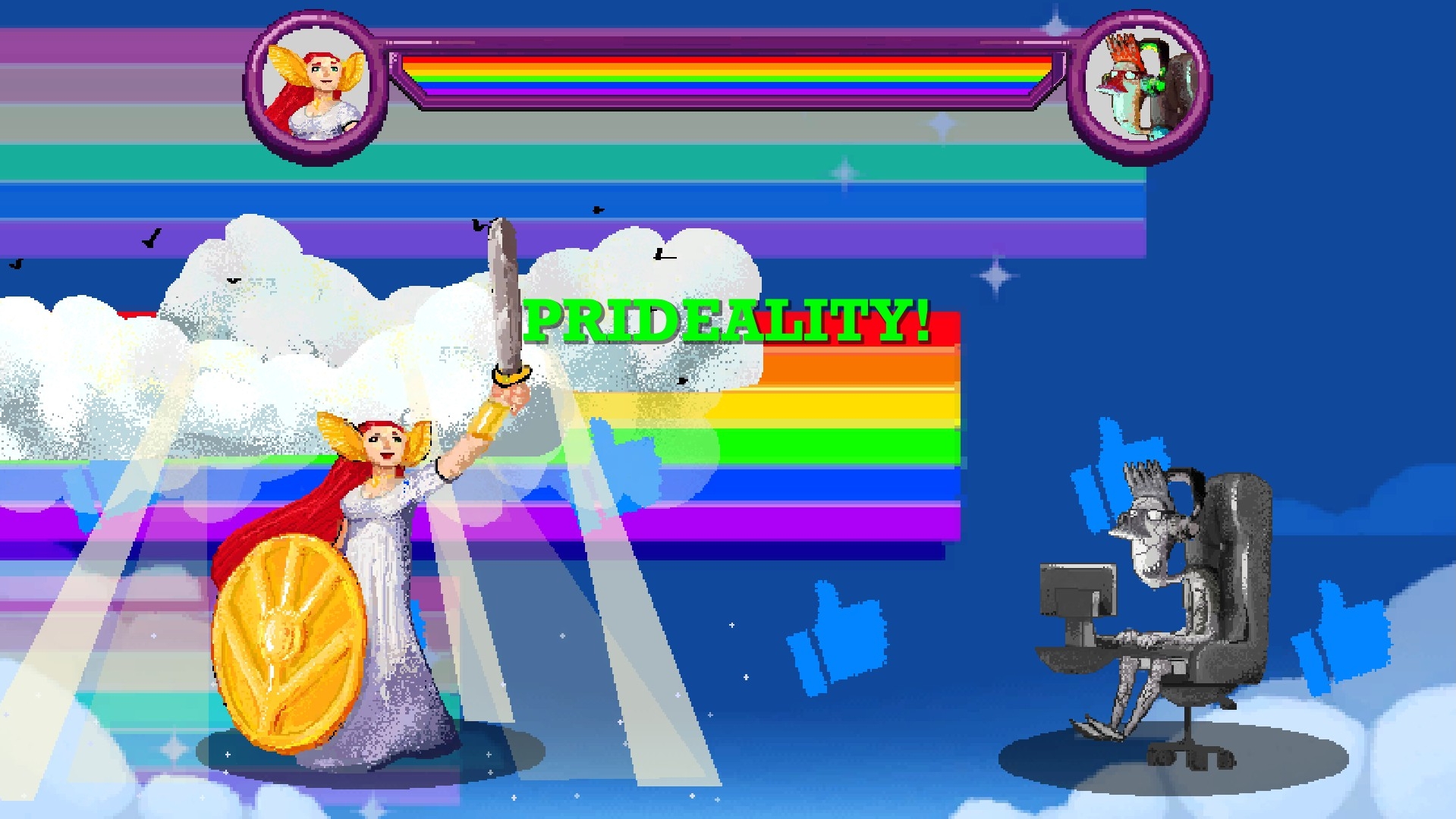 Pride Run is more than just a button-matching rhythm game though. These aren't what I'm meaning with that last sentence, but in the boss battles, you also have button-mashing mini-events or little challenges to perform, to increase your damage. What I actually mean with Pride Run being more than a button-matching rhythm game is the inclusion of strategy elements in the games more challenging mode: Play Hard.

Play Hard, is a sort of mixture of the rhythm-action game that you'll play in Vanilla (the regular game mode) and real-time tactics. Rather than simply matching the buttons as they come along, you're actually tasked with first building your pride parade out of certain stereotypes, each having their own colour, and then moving them into position and performing their actions to meet whatever your needs are.

These needs being to either draw more people into your parade, either as extra groups or the tail of your parade or to actually protect your group from those flinging hate at you. The more hate that hits, the more your mental stamina is drained, preventing you from bringing in new people or further protecting the ones you have. The other difference between Vanilla and Play Hard modes is the inclusion of in-march mini-boss creatures, though these simply take on the form of a button-matching mini-game. 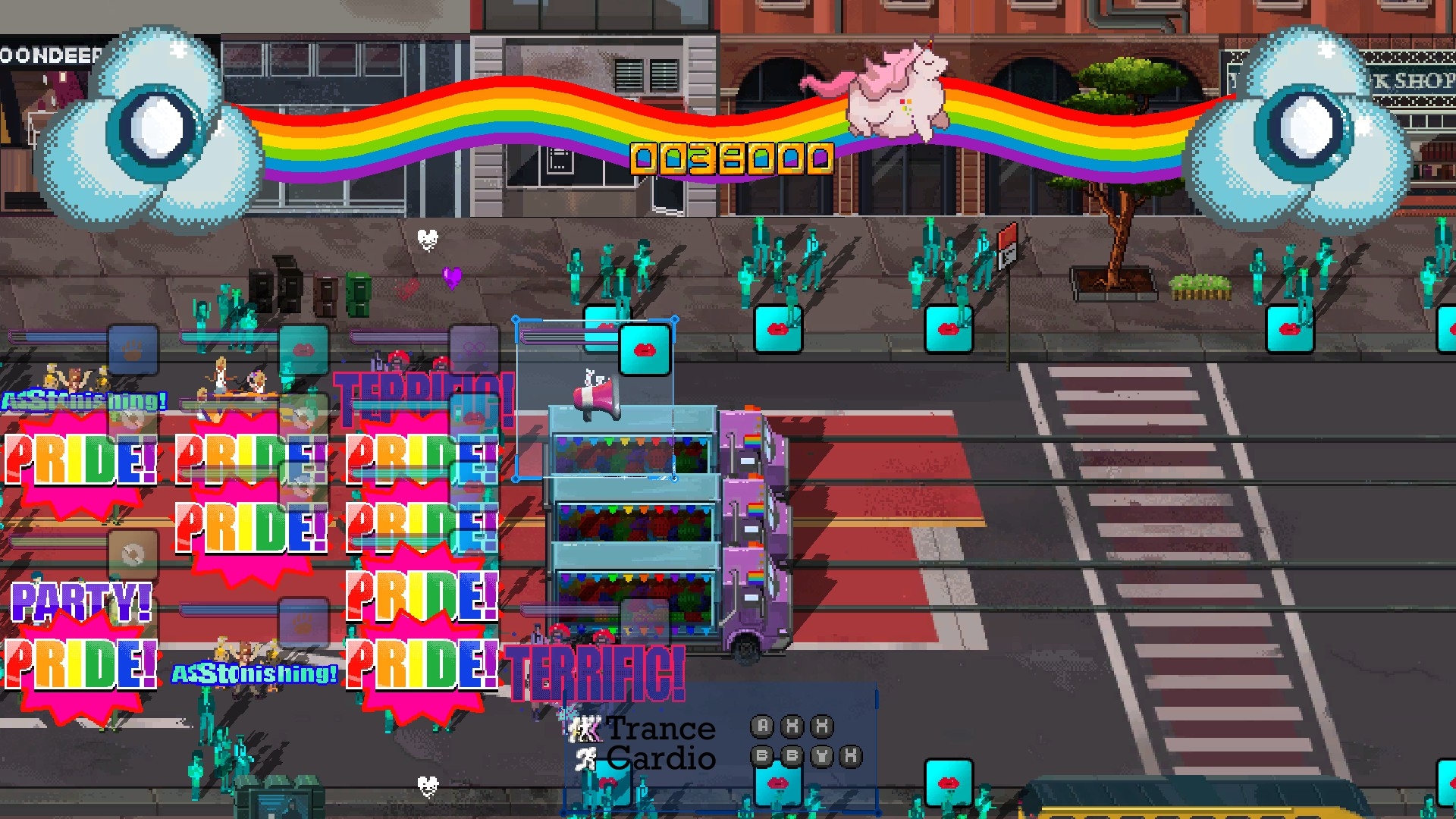 I've said before and I'll say again, my major complaint with Pride Run comes with the fundamental issues it has a rhythm game, or not explaining itself enough. If the game wants you to press buttons in a sort of rhythm when facing boss creatures or during Play Hard and using moves, it should say that instead of just holding the buttons up in front of your face. There's also the aforementioned slight timing discrepancy in Vanilla mode. Oh, and the fact that missing a long hold-button effectively results in a game over - that's just too punishing.

Still, despite these issues, I have had a reasonably enjoyable time playing Pride Run. Once you focus more on the music and working in time with that, everything goes much smoother. It also helps that the soundtrack is genuinely enjoyable. The variety offered only adds to the value, with what are practically two games in one, as well as the in-your-face comedic quality of the game. Is it perfect, even awesome? Nope. Is it a game that I'm going to be playing more of? Yep.

Pride Run is a catchy, engaging and altogether good rhythm action game that's let down by one thing, the game doesn't tell you to follow the beat - rather, it misleads you by not mentioning it at all. Once you get into the swing of things and follow the music rather than simply pushing buttons, the game is at its best, with a funny, even self-deprecating sense of humour. Also, it just looks and sounds great. While not perfect, this is certainly a game worth picking up.