Last year I managed to get my hands on PowerA’s FUSION Pro Xbox controller and, although I wasn’t a fan of it being wired, the build quality and “pro” features of PowerA’s offering greatly impressed me. Fast forward almost half a year, and PowerA has now released its FUSION Pro controller for the Nintendo Switch….and yes, it’s wireless. How does the FUSION Pro stack up against Nintendo’s official Pro controller, and is it worth your hard-earned cash? Let’s find out.

Let’s start by saying that PowerA’s new controller outing is by no means cheap. Whereas peripherals from the manufacturer generally come in cheaper than the official counterparts, this isn’t the case for the all-new FUSION Pro Switch controller. Selling for $99.99, the FUSION Pro is considerably more expensive than Nintendo’s official Switch Pro controller and third-party offerings. However, it should be noted that PowerA’s offering isn’t a simple “Pro” controller clone – it does actually offer additional features that Nintendo’s official offering doesn’t. Then again, the FUSION doesn't tick all the right boxes.

One of the first things that players will notice about the FUSION controller is its presentation. PowerA has made sure that their latest offering feels like a premium product. As such, it comes with a premium travel case that houses the controller, the 9.8ft braided USB-C cable, additional thumb sticks featuring convex & concave caps, cables, and interchangeable white and black faceplates.  The faceplates are a nice addition to the controller and allow users to easily change the controller's look on the fly.

Although slightly larger, the FUSION Pro shares its design with Nintendo’s official Pro controller. The button placement is identical to Nintendo’s controller, but PowerA’s offering is armed with a removable mappable “Pro Pack” on the rear, which houses four programmable paddles. At first, playing with the pro pack attached can feel somewhat unnatural due to the controller becoming bulkier at the rear, but after having played for several hours, you’ll get used to it. Programming the paddles is easy; after using the paddles for extended periods, it's hard to go back to a controller without them. 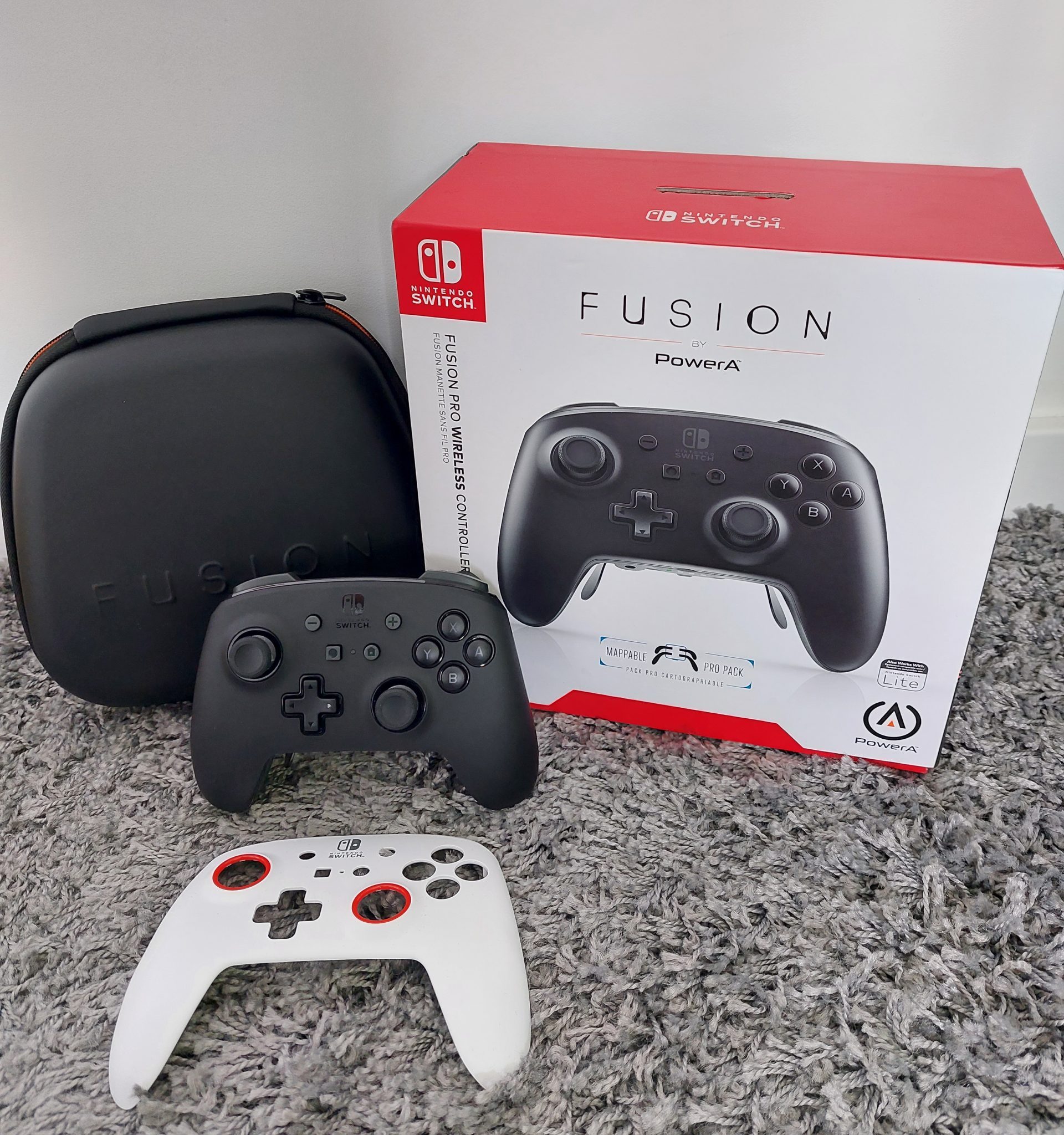 PowerA offers quite the package.

The FUSION Pro controller can be used in wired mode through the supplied USB-C cable and wirelessly via Bluetooth. Users can also connect a wired headset through the 3.5mm audio jack on the controller when playing in wired mode. Connecting a headset in wireless mode doesn't work as the Switch still doesn't support wireless audio (at least, not without an external transmitter - check out the SteelSeries Arctis 7X/P or Arctis 1 Wireless for that)

As for the battery life in wireless mode - PowerA boasts that the FUSION Pro lasts up to 20 hours on a single charge.

PowerA's outing, unfortunately, doesn't come with NFC support, which is disappointing for amiibo fans. Also, the FUSION doesn't support HD Rumble, which does seem to be a missed opportunity for a controller in this price range.

The build quality of the FUSION Pro is solid, and its buttons are all equally responsive. I haven't noticed any stick drift during my weeks of testing, and the controller hasn't failed me once. I might even go as far as to say that the analog sticks and d-pad perform better than the official Switch Pro controller, but this is solely based on my own experience with both controllers.

The FUSION Pro really shines in competitive Switch titles such as the ever-popular Super Smash Bros. Ultimate - using the rear paddles effectively can give competitive players the edge to make a difference. Luckily, it's not only 'pro' players that will benefit from using the additional paddles as they are also really beneficial in the more regular titles. I've tested the paddles with various games and found that mapping the paddles to certain buttons really improved my gaming experience.

I mainly used the controller in wireless mode, and I haven't experienced any noticeable lag during my playing sessions. As for battery life - the advertised 20-hour playtime appears to be on the safe side here as the internal 900mAh battery easily lasted considerably longer than that.

PowerA's FUSION wireless controller for the Nintendo Switch does most things rights and can be considered a great alternative to Nintendo's official Switch Pro controller. As a matter of fact, it does pack more features than its official counterpart. Then again, the FUSION is by no means cheap, and because it misses some basic features present on Nintendo's own controller, this controller isn't for everyone. Still, if you're a competitive player and don't mind spending $100, you won't go wrong with PowerA's outing.

For the competitive player, the FUSION Pro wireless Switch controller from PowerA is a worthy alternative to Nintendo's official Pro controller. Unfortunately, it's rather expensive and misses out on some basic features. Clearly, PowerA's controller isn't for everyone and pro players on a tighter budget might be better off with the 8BitDo SN30 Pro+ controller.