The Moga XP5-X Plus from PowerA is an unusual specimen. It lacks the bells and whistles of other controllers – it doesn’t have any fancy lights for those who love flashy, for instance – but nevertheless, it is a solid, dependable and impressive controller.

Looking at it for the first time, you might be slightly confused by the number of switches and extra buttons along its face. These can be a little fiddly as you have to make sure to swap between USB and Bluetooth control and that you’ve got the charge set. There’s also a battery button that lets you see how charged the device is thanks to some little LEDs, but the button itself feels a little unnecessary. Although it's got two additional buttons around the grip, most of the additions aren’t actually for playing.

Setting up the controller is simple enough once you’ve got the control in the right setting. You have a USB and micro USB at the top for charging and wired control, and simply plugging it into your Xbox or PC should have it sync up easily.

Once you’re ready to play, you’ll find the thumbsticks are smooth and offer little resistance. This can make it feel a little floaty and cheap as you get to grips with it, and a little pushback might have helped stabilize your precision. After a few minutes, you’ll be able to gauge it well enough, and the lack of resistance means you can learn to counter any slide you accidentally put in, though it still feels a little loose.

The buttons configured in the standard Xbox layout are absolutely average. Each of the primary four has a glassy raised feel so you can find them easily, just like an Xbox, and they have a small amount of spring back so they’re not getting jammed in the plastic. If you’re looking for a controller that isn’t an Xbox, this is probably the wrong one for you.

One of the only real differences in the buttons is that the start and select buttons, or whatever they are called on Xbox nowadays, are raised and in a more difficult-to-press position. You probably don’t need the buttons too often or with haste, but it can still be fiddly to reach when you’re trying to open the menu. 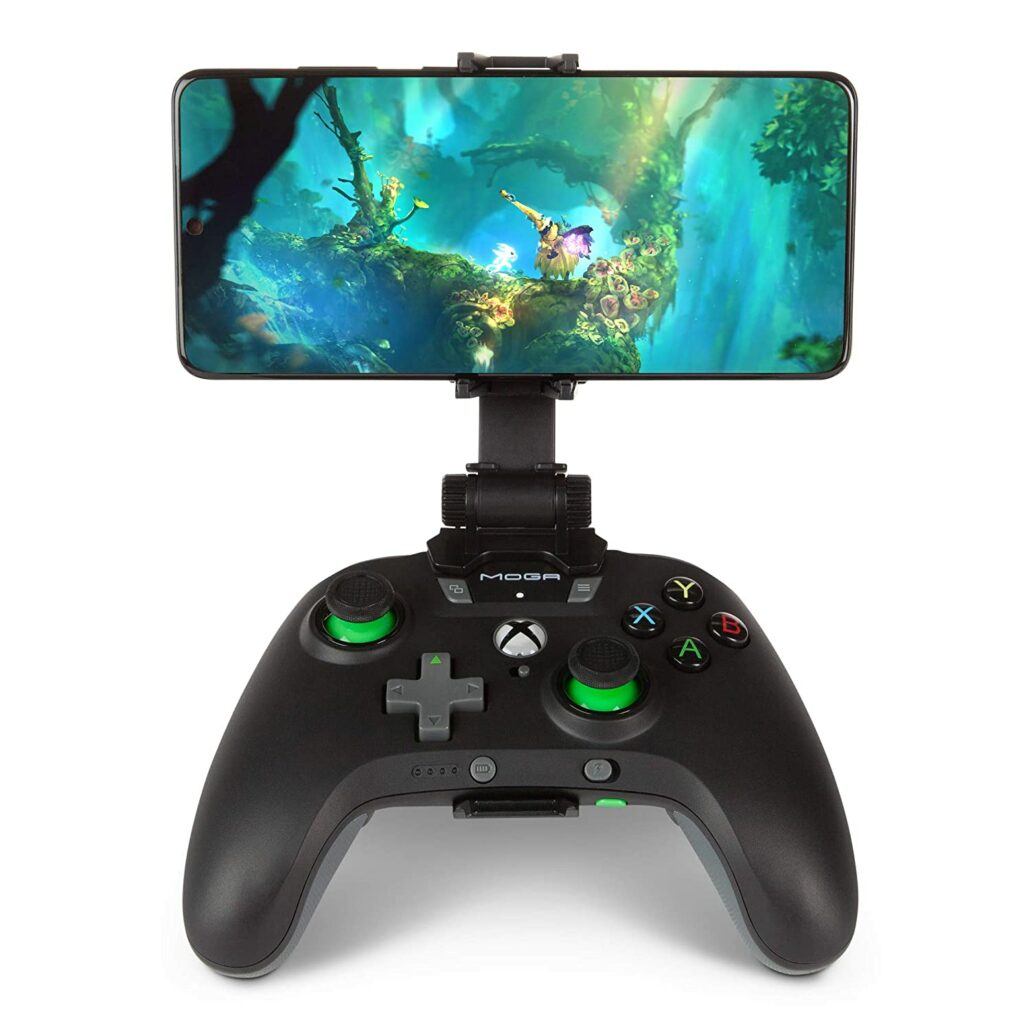 The grips, however, are really comfortable and the with soft rubber padding replacing the typical hard plastic. They can get a little sticky when warmed up with you happen to have hot hands or a long play session, but it's not really noticeable until you let go. The controller itself is also really light while still feeling sturdy in your hands. All of this makes one thing about the XP5-X Plus very clear. The controller was designed for phones specifically, and the Xbox and PC use is just a bonus.

The phone bracket is strong, hard plastic, and about as heavy as the XP5-X Plus controller itself. It locks into the controller well and feels held in place. On the other hand, the phone holder uses a simple squeeze to keep the phone in place and feels decidedly looser, although I never had an incident of my phone falling out. Frantic gamers or sessions on a moving vehicle might have to be more cautious. It does have two adjustable pivots that allow you to move the phone into whichever position you want with ease. The Bluetooth range also means you can have the phone on a table or otherwise detached from the controller a few meters away without any lag.

What really makes the controller great for mobile games is that it operates as a battery pack and a controller in one. Using the USB connector, you can plug the controller into your phone and charge it while playing. The controller's battery life is really strong even when charging, and you’ll be able to get many hours of use out of it without issue. This also improves the utility of the controller's weight and sturdiness as you can throw it into your bag or large pocket and not have to worry about it, using it as a controller, battery pack, or both as the need arises.

For Xbox players with some cloud games on their phones, this controller is a godsend. You can use it on your Xbox as you would any normal controller before picking it and throwing it your back to keep playing on your phone elsewhere. Strictly mobile gamers will still find plenty of use for this as well, taking away the awkward touchscreen controls and providing some more comfortable handholds than your typical smartphone.

The XP5-X Plus might look unassuming, but it isn’t ugly. And while its buttons aren’t going to give you an edge in Fortnite or immerse you in the game, they’re functional and provide everything you need for a solid mobile experience. While it certainly won’t be replacing anything heavier in the household, it’ll be hard to find a more well-rounded mobile controller.

The Moga XP5-X Plus is a great and versatile mobile controller with a lightweight, comfortable design, battery pack, and a few extra buttons for your games. It doesn't offer the world, and it doesn't look fantastic, but it does have everything you could want to play games comfortably on your phone for hours and hours and hours.