There’s a tendency among Minecraft-alikes to forget what made Minecraft so popular. Aside from the novel pricing during alpha, LEGO comparisons, and a vague crafting system that really forced the community to come together, it was the freedom of it. You drop into the world, and you go anywhere, do anything, build the world you want to build. Yes, I know that you’re fully aware of what Minecraft is, but the building blocks (hehe) of its success cannot be understated. 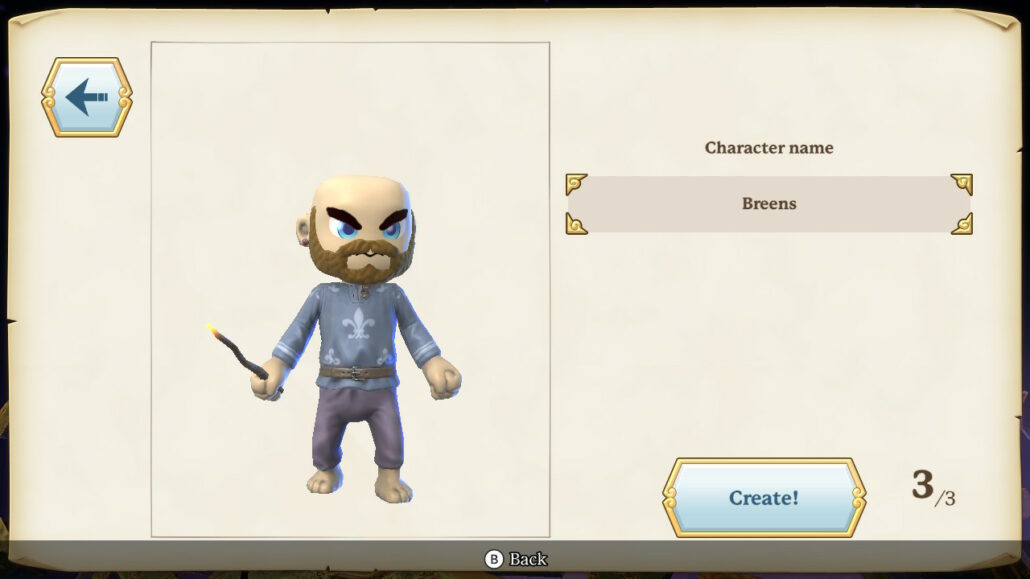 Imagination is required in Minecraft, with the limited selection of blocks you must take yourself back a few hundred feet and squint a wee bit in order to have your majestic replica of a castle look like your reference point - but this imagination requirement also makes absolutely anything that much more feasible. Adding details, more block types, and most damagingly, linearity; well, it just doesn’t gel with the way the game should be played. It’s something games inspired by Minecraft have yet to learn, and Portal Knights is yet another title where I’m sure it seemed like a great idea at the time.

It’s a shame though, because the foundations of Portal Knights are all here, and they’re solid, with some great ideas. Take the basic crafting formula of Minecraft, which is tried and tested, and introduce more customisability, more interesting, detailed environments, heck just a few RPG elements to make things unique. All great ideas, all implemented well, but together, it all feels like a bit of a mess. 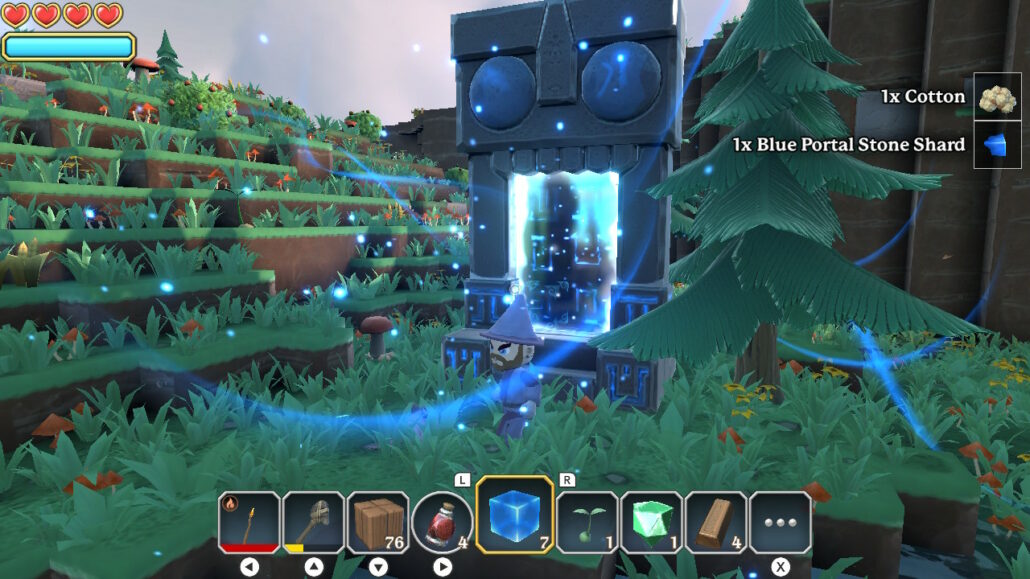 In Portal Knights you start as a basic Warrior, Ranger or Mage class in a tutorial area, where some quests will run you through combat, collecting materials, crafting and progressing through the game. You do set your own pace, for the most part, and the game never rushes you, but there’s also no agency. Or reason to do anything, I suppose. Exploring the world and making progress is its own reward, but what is defined as progress is a bit weird. Is it completing quests? Achieving your own goals and building your own structures? Crafting new gear? I suppose its all of these things, but none of them made me feel like I was, well, progressing. Or enjoying the experience.

Instead, it felt more like a checkbox exercise. Upgrading the Workbench to Workbench II happened because the quest told me to. Sure, it was a tutorial quest, teaching me how to upgrade things - but I also don’t know what new avenues that opened up for me. The game never told me why it was necessary, it just was. Having tutorial quests for things like this are nice, but then the game left me alone to figure out how to repair my tools - which degrade really fast. Luckily it’s simple enough to repair them, once you figure out how. 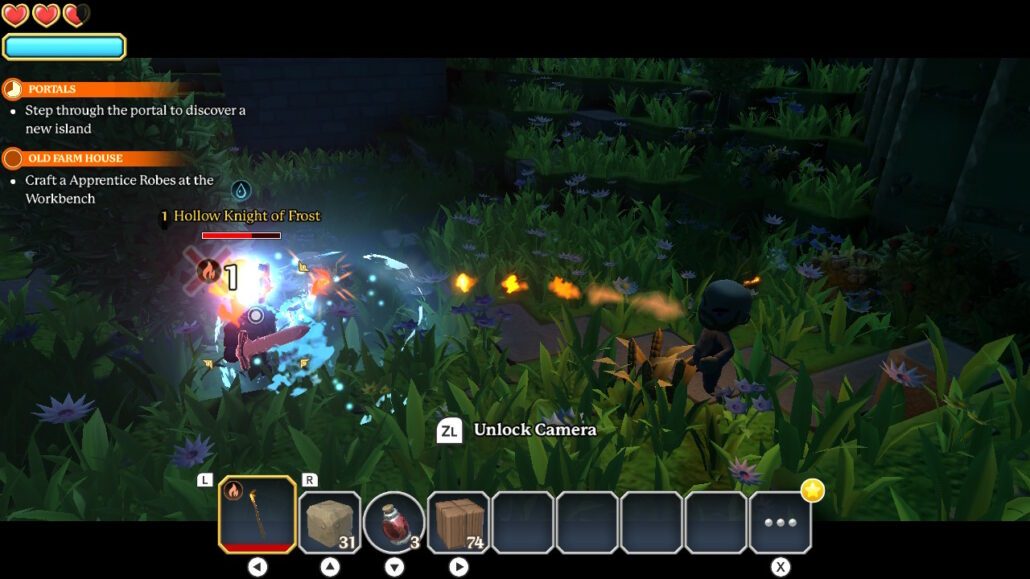 Once you’re done mucking around in the tutorial area it’s time to move on, by crafting a portal from blue stone shards. You collect these from almost everything, so you should have plenty after killing monsters and mining for resources. Each portal you complete opens up the next area, which has a different theme, vibe and monsters. They feel like unique areas, something Minecraft wishes it had. Sadly though, the randomly generated nature of the world lets it down. In one world I had generated, a house was on top of a hill overlooking the rest of the area. Beautiful. In another, that same building was in a pit that I had to dig my way out of. Not so beautiful.

When you jump into Portal Knights and generate your own world you can select from a Small or Large world size, and the largest world size isn’t exactly that big. Not a problem though, since there are loads of different “stages” to visit, not confining you to a single, limited open world. Each stage is unique, taking on different appearances, such as desert, forest, snowfield, and changing to a different season, Autumn, Spring, etc. The change of scenery is a welcome addition and makes traveling between them feel like there’s some genuine progress between each one. 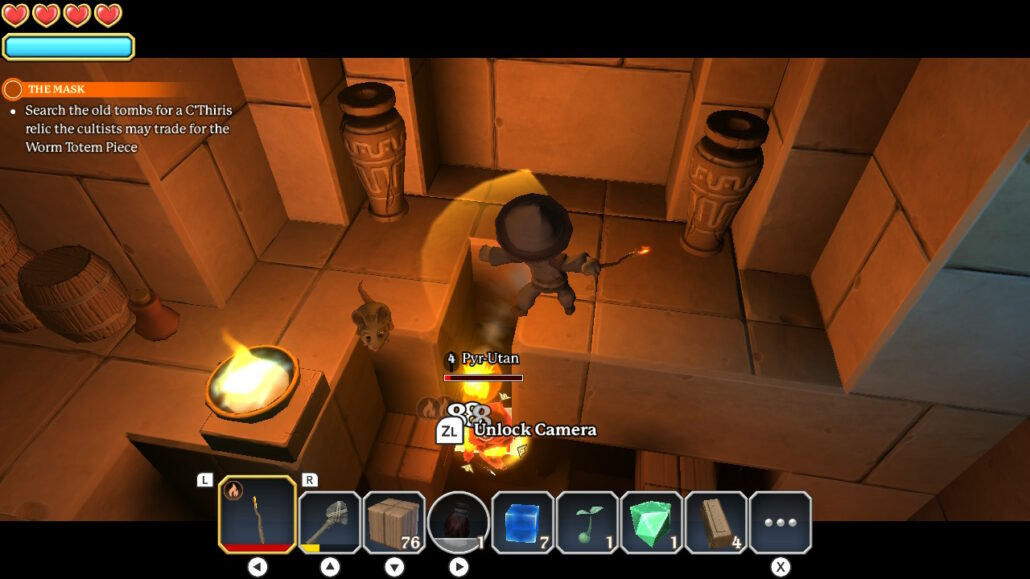 Simple acts like mining, however, feel so frustrating. It sounds minor, but it’s awkward to aim at a single block to mine in third person (there is, of course, a first person mode) and the mining just takes too long. Perhaps this is an isolated complaint, but staring at blocks to slowly chip away at them is a tedious process, especially on top of all of the regular combat you’ll be doing. It takes too long to collect a single block, even with the proper tools, and it makes digging a staircase out of a hole super frustrating - more frustrating still, is that sometimes the game will essentially tell you to get into the holes before making you burrow your way out, unless you warp to a past area.

On top of a myriad of small frustrations, we even have an apparently Switch-specific bug, where the Warrior - the only melee class - can’t hit flying monsters. They fly right over the weapon’s hitboxes, and it’s utter nonsense. The development team made it clear that they’re aware of the issue and are fixing, but when an RPG-like game has only three classes, having one of them being entirely broken is unforgivable. 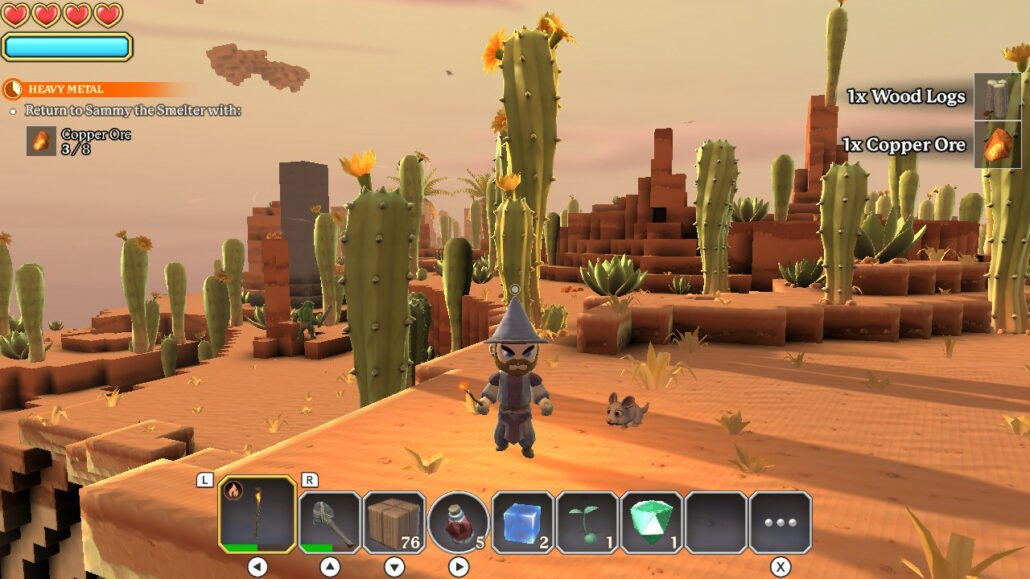 But, it’s not all doom and gloom. Portal Knights is a very pretty game, and although the framerate can chug at times, it never became a serious problem in my time playing the game. The abundance of flora covering the world gives everything a bit of extra depth, but it also makes the blocks underneath more difficult to see. Typical. It’s a shame, but it feels like for every positive addition this game has over its basic block-placing buddies, there’s also a negative point to counter anything I can praise. A real shame, because I think Portal Knights had great promise, but I wouldn’t recommend it over either Minecraft or Dragon Quest Builders.

Portal Knights is a Minecraft-alike with a lot of personality and a lot of promise, but in its current state, I just couldn’t enjoy it. It feels bloated in places, empty in others, and just can’t compare to other games in the block-placing, creation “genre”. Fun for a while, but outstays its welcome too quickly.