You may have read another review of this game we published earlier. However, we received evidence that the review was not conducted with the level of care and thoroughness that we demand from our reviewers. As such, we have re-reviewed the game and you should consider this to be our official review. We apologize for the inconvenience.

At the dawn of time, mankind managed to elevate itself from beasts by using resources to build things that could make life easier. This "peculiar" ability, which obviously evolved since its humble beginnings, allowed humanity to prosper through different eras, no matter the dangers. But what would happen if people were to lose this ability of all sudden, forced to survive with what little is left from the past, waiting for the inevitable end? They would wait for the Builder to come and restore the world to its former glory, according to Dragon Quest Builders.

The Dragon Quest Builders' premise is quite interesting, especially for long-time fans of the series, as the game is kind of a sequel to the original Dragon Quest. Following the parallel ending of the original Dragon Quest, where players accept of dominating the world of Alefgard together with the Dragonlord, the evil being kills the Hero and unleashes his monster army on the world, robbing humanity of the ability to build in the process. After several years, a different type of hero appears in Alefgard, the Legendary Builder who has the power to restore humanity to its former glory and prepare it for the inevitable confrontation with the evil Dragonlord.

Dragon Quest Builders' story is pretty much the usual save the world from evil story that we have seen in countless other Japanese role-playing games, but its execution manages to elevate it, with a humorous tone and some witty writing, both perfectly in line with recent Dragon Quest games, that give the whole game a light-hearted feel that charms players from the get-go. The way the story is told, mostly through NPCs dialogues, also helps immersion, allowing them to slowly learn more about what happened since the Dragonlord's victory over mankind. NPCs, who all play a part in the restoration of human civilization, are also quite personable, thanks to the excellent writing, so players will eventually come to care for them.

Dragon Quest Builders' story and characters are just a small part of what makes the game such an enjoyable experience. At its heart, Dragon Quest Builder is an action role-playing game which masterfully blends Japanese Role Playing features and crafting game elements. While the game might seem like a Minecraft clone at first glance, with an art direction reminiscent of the game developed by Mojang, Dragon Quest Builders plays nothing like it, as crafting is a mean to an end, and not the end itself. By creating facilities, players will be able to level up their bases, with story progression tied to specific base levels in each chapter. Those delving deeper into the crafting mechanics, increasing the base's level to the max to access optional content, will notice how the game does sport some degree of freedom in its main play mode, but it's nowhere near Minecraft's. This isn't an issue at all, though, as more freedom wouldn't have made much sense for the Dragon Quest Builders story progression system. Things are way more open in the Terra Incognita mode, where players can build whatever they like and share their creations with other players.

Crafting in Dragon Quest Builders is a rather simple affair, but it's quite enjoyable. To create items, players will require, together with base materials, the right crafting station such as the mason's workstation, the forge and the cookfire. Placing them inside empty rooms will allow players to create a variety of facilities such as the kitchen, the blacksmith studio and more, which are worth more base experience points than empty rooms. Adding furniture will also make players earn more points, so they can go wild with decorations to improve the base's level. Sadly, base building limited by the fact that players are starting from scratch at the beginning of each of the four chapters, a mechanic which highlights how crafting, while central, is not the only focus in the Dragon Quest Builders experience.

Dragon Quest Builders straightforward game flow is yet another feature that makes it quite enjoyable. As building and improving the base's facilities is tied to story progression, players will be doing a lot of materials gathering and crafting. Thankfully, that's not all they will be doing, as quests from NPCs are quite varied, ranging from exploring newly accessible locations to obtaining specific materials or drops from monsters, crafting recipes, meeting other NPCs and so on. Especially enjoyable are quests where players are given a blueprint of a facility to create it exactly as illustrated on it. All these little variations to the formula help in making Dragon Quest Builders never feel repetitive.

Aside from material gathering and crafting, players will be doing plenty of combat during the course of the game. Dragon Quest Builders features a rather simple and functional combat system, a basic action role-playing game system where players have the ability to attack with their equipped weapon, use items and unleash some special attacks, such as the Spinning Slice, that are learned as the game proceeds. Battles are generally not all that challenging if the player takes care to always bring the best possible weapons and armors, but bosses and quests where players must defend the base from monsters require a bit more of effort.

One other feature that makes Dragon Quest Builders enjoyable is the scope of the game, despite its apparent simplicity. Right from the start, players are able to see far away location from specific vantage points, making the whole world feel almost real and believable, despite its blocky, almost Lego-like, appearance. This feel is replicated nicely on the PlayStation Vita version as well, despite some performance issues which become quite noticeable with several on-screen enemies. These issues, however, aren't as annoying as the indoors camera, which makes navigating buildings and dungeons extremely uncomfortable.

While the blocky design of the world may not be everyone's cup of tea, there's no denying that it works incredibly well in Dragon Quest Builders. Characters and the trademark Dragon Quest monsters, such as Slimes and Bats, are faithfully replicated in the game, with a less blocky and more detailed style that make them more pleasing to the eye. The soundtrack is the classic Dragon Quest orchestrated soundtrack which gives a nostalgic feel to old-time fans of the series and manages to make the experience even more charming.

At the end of the day, I have thoroughly enjoyed my time with the game. The unique blend between crafting and Japanese role-playing games created by Square Enix works incredibly well, with the charm of the Dragon Quest series making it a memorable and addictive experience. So much, that even those unfamiliar with the series and crafting games can definitely find something to like in it. 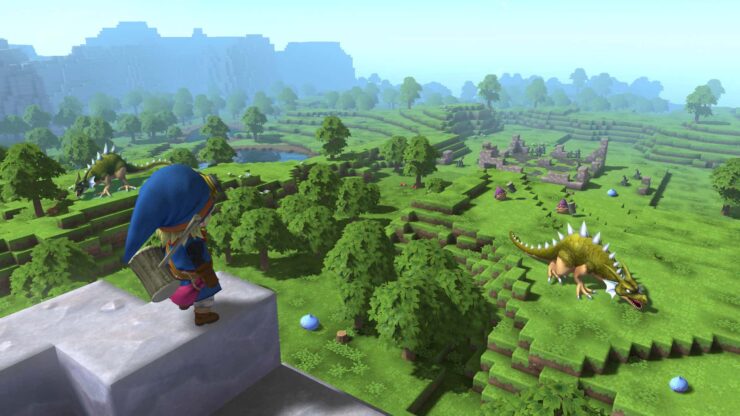 Dragon Quest Builders is an excellent role playing game which masterfully blends crafting and JRPG mechanics to offer a very addictive experience. The humorous and witty writing, the scope of the game's world, the charming presentation, the quest variety and the balanced difficulty level are just some of the things that the game gets right. Whether you are a long-time fan of the series or a newcomer, the unique charm of Dragon Quest Builders will grab you and will only let go once the game's four chapters have been completed.