Sony and Microsoft have revealed the PS Plus and Games With Gold subscribers will be able to play for free in August. Sony is offering up Call of Duty Modern Warfare 2 Campaign Remastered and the new-release title Fall Guys: Ultimate Knockout, while Microsoft is offering a bevvy of older games, including Portal Knights, Red Faction II, and more. 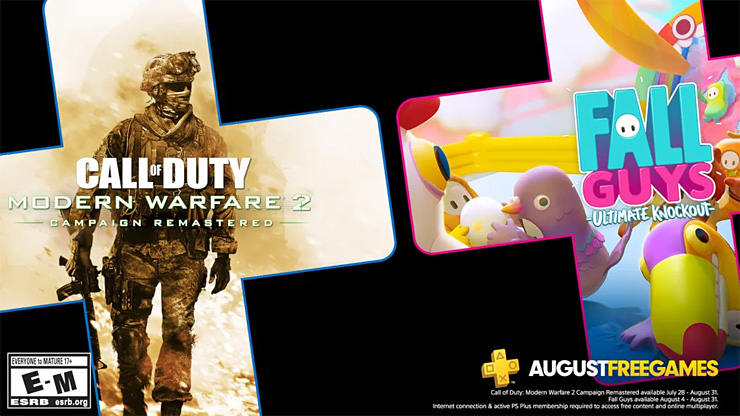 Here are Sony’s descriptions of August’s PS Plus games:

Call of Duty Modern Warfare 2 Campaign Remastered immerses you in a gripping, action-driven adventure in which you must face off against a deadly new threat hellbent on bringing the world to the brink of collapse. The single-player campaign has been fully remastered with improved textures, animations, physically based rendering, high-dynamic range lighting and much more. Rediscover classic missions like Cliffhanger, The Gulag and Whiskey Hotel as you once again join Soap, Price, Ghost and the rest of Task Force 141 in a globe-spanning fight to restore order to the world.

Survive a series of hilarious challenges until one victor remains in this colorful 60-person online multiplayer party game! Test your mettle in brutal free-for-alls or co-op challenges where only the winning team advances to the next round. Bend, bounce and bash your way through hilarious physics-based obstacles, from smashing through doors, to balancing on massive see-saws, to racing up mountains riddled with traps. Add a touch of style to your Fall Guy by customizing them with everything from classy pineapple couture to flattering prehistoric fashion.

And here are your August Games With Gold:

Forge your character, craft epic weapons, and vanquish your enemies in this 3D action sandbox RPG. You and your party are the only hope for a world torn apart and terrorized by the Hollow King. Level up your hero as you explore dozens of randomly generated islands, create amazing structures, and interact with the colorful inhabitants of the land, in a quest to become the ultimate Portal Knight.

Fight to overthrow a corrupt dictator and government in this classic first-person shooter. It has been five years since the rebellion on Mars began and the oppressed people of the commonwealth are rising up. Lead a squad of unique super-soldiers, each with their own specialized methods of destruction ranging from demolitions to gunships, to topple the crooked government and restore peace to the land.

High-octane mech battles are delivered in a city-crushing ballad of destruction! Experience a blockbuster full-length campaign, a myriad of local and online multiplayer modes, and a cast of 12 gigantic mechs to pilot, each customizable and with their own special abilities. Tower over your opponents and lay waste to environments inspired by real life locations to become the top mech pilot. No gears, no glory!

Sony has also announced they’ll be offering a free multiplayer weekend soon, which will allow you to play any MP without signing up for PS Plus. This will kick off on August 8 at 12:01am and continue until August 9 at 11:59pm.

What do you think of this August’s free games? Is Sony or Microsoft the winner this month?