Where ever teenagers are, urban legends develop. Whether it’s a sinister figure stalking young lovers deep within the woods, or monstrous twins that hunt anyone that breaks an arbitrary rule. There is always something that goes bump in the night; according to the adolescent generation.

Oxenfree is one of these stories. A presence detected only via radio in an old abandoned military installation haunts some intrepid teens. I don’t want to call it a ghost story, as that might not be exactly true, but Oxenfree is one of the best ghost stories I’ve ever encountered. Better than most any book, film or television show recounting the same topic. It firmly sits around a campfire and unnerves you through its dozen hour playing time, without falling into blood, guts, or gratuitous violence.

Although you might not be hiding in a corner with all the lights on while the gang slowly uncovers the secrets of Edwards Island, you will experience an incredible sense of unease. This isn’t the jump scare laden adventure or shooter disguised as scary you’ve come to know as the horror genre, but a genuinely well-crafted ghost story. It bears all the hallmarks of a classic with none of the tropes.

Oxenfree is much more fleshed out that your standard horror fare, with characters that, while not always likable, feel extremely real in the face of unnerving, otherworldly phenomenon. You play Alex, one of many teenagers out to explore the old island and its many mysteries. At first, Alex and her friends actually embrace the stories of non-existent radio stations and weird messages with the kind of creeped out enthusiasm you might expect. But as the night turns darker, and voices on the radio become more than harmless amusement, Alex and her friends start to panic.

But this isn’t the teenage party you might be expecting having seen any horror film ever. There isn’t one couple determined to have sex despite the shadows creeping up behind them, there isn’t an idiotic jock that refuses to accept the fate he finds himself in. Instead, like all of us, the characters witness what is happening and react in a believable way. 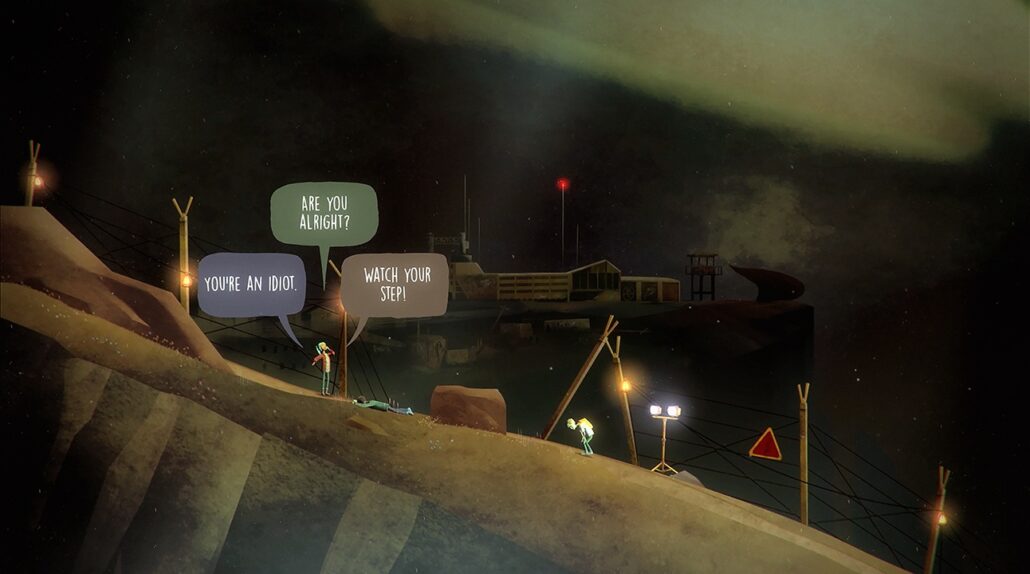 However scary the experiences they witness, they are all still teenagers. Grudges still ooze between angered parties, awkward, nervous jokes are made by people who cannot quite face the new reality sweeping them up, and attempts to look cool are often made in the dialogue. It’s extremely refreshing to deal with plausible people during an implausible event. Until Dawn, however fun, was filled with terrible decisions and irrational actions. It was an extreme that I believe does not represent the teenage reaction to life threatening situations.

And speaking of Until Dawn, Oxenfree blows it out of the water in terms of voice acting. Although obviously Until Dawn was attempting to be an over-the-top homage to the 80s slasher genre, Oxenfree has some truly great actors conveying the tale of Edwards Island. Everything has a level of authenticity to it, from the way characters occasionally interrupt each other to the apprehension in their voice as the night progresses. More than anything you hear it in the voice of Alex, as she copes with whatever the night throws at her, and has to face some fears alone.

While you might not tackle any genuine supernatural combat in Oxenfree, you will experience the paranormal first hand, and the island presence is not friendly to outsiders. Most of the game is composed of exploration, puzzling, and dialogue, with the island split into a fifteen or so unique locations. There is a surprising amount of mystery here, which stems from the islands unusual past and history with radio, all delicately laced over the dialogue and visuals. Most of the puzzles in this game involve radio waves, and the strange signals found throughout the island. Hints and clues are offered as to the motives of whatever stalks the island at night, while others offer a level of intrigue. Some signal detected sounded suspiciously like morse code, although I have next to no practice in decoding such a message, other players might revel in picking apart the deeper mysteries of Oxenfree.

The puzzles aren’t taxing mentally, and a lot of what you’ll have to do is navigate the daunting social complexities of a group of teenagers. When in trouble do you try and save your best friend first or the person who hates you to try and redeem yourself? Do you open up to your brand new step-brother or keep your distance? And of course, do you mock the monsters or try a more diplomatic approach. Dialogue also helps the player shepherd the story along, giving you the chance to develop or hinder your relationship with the rest of the gang, and make decisions that can lead to one of many endings. With the cast's superb performance, it's understandable why this takes up such a big part of the game.

The conversations can run on a bit though, so when you see a point of interest on the island, you might have to wait around until everyone is finished speaking before clicking on it or miss possibly prudent information.

And speaking of the island, Oxenfree’s world is a beautiful and spooky one. The island itself is displayed in 2D with a surprising amount of depth to explore. But the graphical design is truly captivating, and the character interaction is really well implemented. Even the spookier elements of the game are really well layered into the visuals of Oxenfree. When something unusual happens, it becomes completely obvious in its contrast to the normal world beyond the reach of the sinister shadows.

Oxenfree is a fantastic game, its story could not have been told better, with some expert voice actors and incredible visual effects. The fact that the antagonists of Oxenfree are almost beyond our comprehension is a brave and well-rewarded move. Although their motives initially appear vague, confused and dangerous, could feel purposely aggravating, Oxenfree represents the supernatural in a way that feels beyond our understanding, and helpless to influence it. This is a fundamental aspect of what makes Oxenfree so spooky, that these powerful entities act in a way we can’t possibly predict, while clearly remaining intelligent.

Those too scared to boot up a horror game can enjoy the intense atmosphere without fearing a heart attack at unneeded jump scares in Oxenfree, while those who enjoy a good ghost story can play one of the best the genre has had to offer so far. The characters of scared teenagers might be a little off-putting if you hate a cliché, but the depth of the personalities, situations and voice work make this an experience you won’t want to miss. 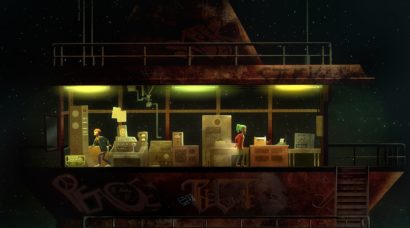 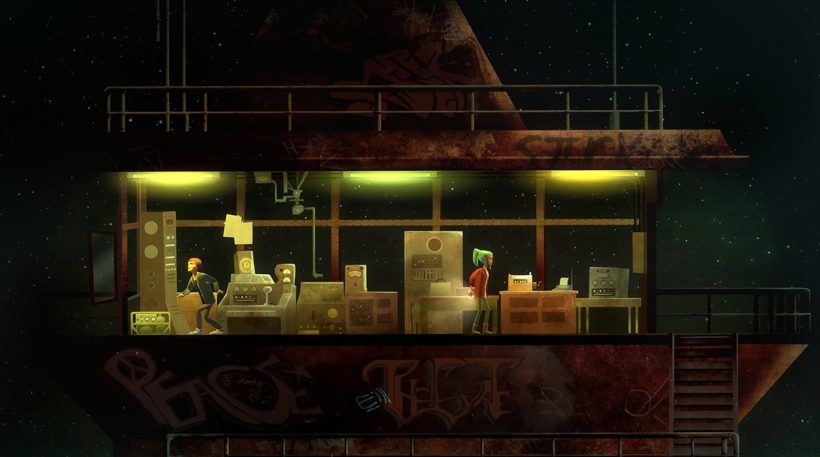 Oxenfree is wholeheartedly one of the best experiences you can have playing games. It is a cornerstone example of how stories can be told in an interactive media, and how to build a supernatural tone around 'average' characters without exaggerating everything.