Have you ever been at a party that you’re not certain your welcome at, where every group seems troubled by your presence and alcohol is the only escape from the awkward conversations? I think we all have, and I think Afterparty knows it.

In Afterparty you’re dead. How you died, and more importantly, how you lived is yet to be revealed, but judging by your final destination, it’s not looking good. You’re in Hell, and while the place has all the hallmarks you might expect (lava rivers, Gothic architecture, and abundant torture), it's also nothing like the Hell you might have imagined.

Afterparty is a game about growing up, and a game about work. The denizens of Hell just live for the weekend. After an eternity of torturing and torture, the routine has become stale, so the demons and victims of the circle all head to the various bars and clubs dispersed around Hell to drink away their problems each evening. This depiction of Hell is a supremely intriguing location, and while there isn’t much to explore in Afterparty beyond the path you’re sent on, there’s still lots along the way for you to be distracted by. Even Lucifer himself is less interested in the day to day punishment he’s normally famous for and offers a reprieve to anyone who can match him in a drinking contest, which is the primary goal for the protagonists of the game.

A lot of popular cultures have recently done their best to reinvent Lucifer, from the titular television show about the Devil grappling with his humanity to Rick and Morty’s Needful Things shop owner tech entrepreneur, but Afterparty still manages to find an interesting take on the guy. While the whole game, from the characters Milo and Lola to Hell itself, is so drenched in interesting lore and conversations, it's the Devil that has the most interesting framing. An early conversation can reveal that the Devil isn’t so much the manifestation of evil as he is of descent. His role in the cosmic scheme of things is to push against the norm. And that makes his official position as the punisher of bad humans and the less official role of party host a lot more interesting, but I won’t spoil anything further than that. 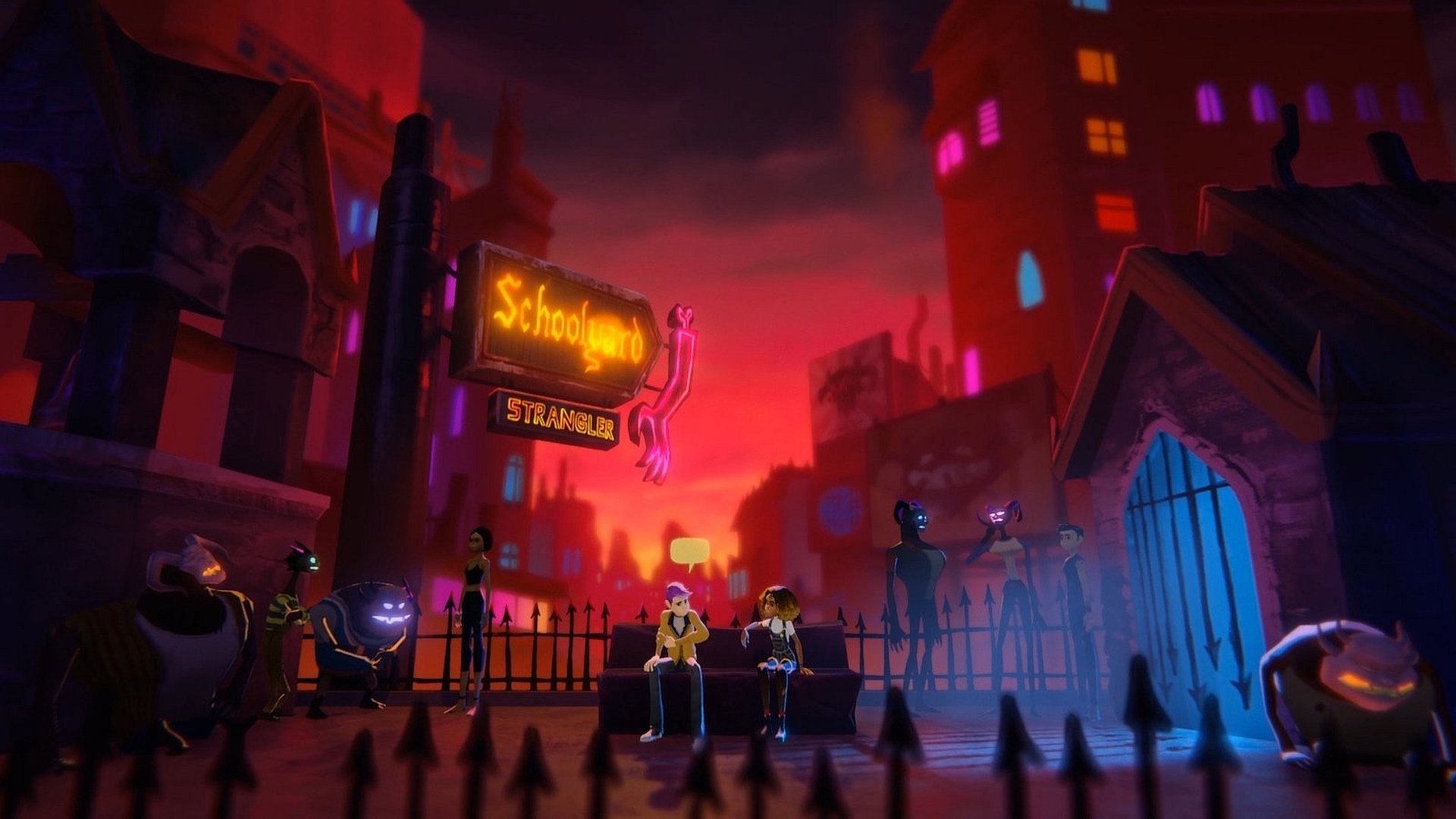 Hell’s awkward party atmosphere also plays directly into the central mechanic of the game. Lola and Milo are trying to talk their way into Lucifer's house party to challenge him to a drinking contest, but they need a little liquid courage to do so. This means navigating dialogue branches with the most sinister of beings. Cocktails in Hell are free though and seemingly made with the distilled essences of human personalities. Drinking them will unlock new dialogue options, from confident to flirtatious, and might just open doors that would have been otherwise closed. Or, it might get your soul ripped to shreds by demons.

But that’s not to say Afterparty is anything like a horror game. While there are some emotional tasking moments thanks to the personal demon that follows you around, most of the game is really a comedic ride with very few missed notes. If players are coming to this off the back of Night School Studios' last game Oxenfree, the witty conversations are still there, but the edge to the comedy is a lot sharper. Afterparty highlights this at the very beginning when you witness other mortal souls sentenced to their immortal punishments. Or in the Durty Hurdy Gurdy, where you can strike up conversations with the tortured souls of remarkably familiar looking (dead) singers.

Whether you’re talking to Lola and Milo, scrolling through the demonic social media or drinking with the Devil himself, Afterparty is both funny and engaging. But it isn’t without its faults. Playing on PC I ran into a couple of glitches, from frame rate crashes to an impassable door that forced me to quit and reload. None of it ruined the save, but as all comedians say, timing is everything and these unfortunate issues did disrupt the flow of the game. Moving onto the graphics department, while Afterparty looks nice, personally I think the Oxenfree design was more inspiring, but this is only a matter of opinion.

Picking the right, or wrong, drink for the moment is a great way of keeping the conversation heavy game feeling fresh. And thankfully you never have to worry about going through the same conversation over and over again with different drinks to get the right outcome, the new options just change the way you’ll get to your goal. 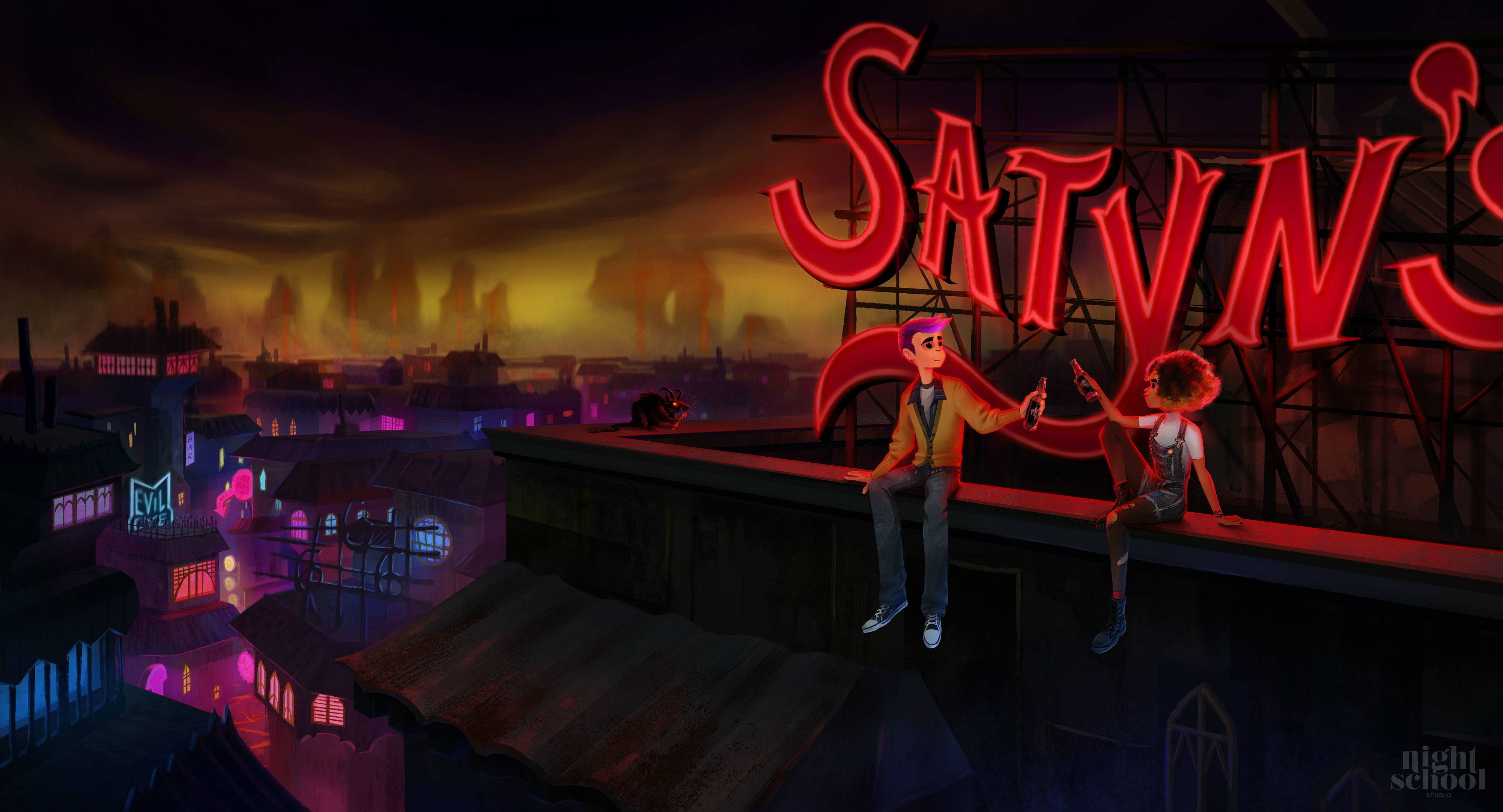 And speaking of repeating conversations, it’s mentioned in the game itself that Afterparty is worth playing through multiple times, with a plotline that evolves into the New Game Plus mode. No spoilers, but do it. It's worth it.

I wish there was more to explore in Hell, more avenues and hot spots to wander down, but that’s only because what you do get is so much fun. From the conversations you’ll have with the murderers and the demons, to the self-reflective moments that make you consider how your work makes you feel, Afterparty is another fantastic game from Night School Studios and further cements their often ambitious, but never unrealised style. If Afterparty is what Hell looks like, I guess I'll stop worrying too much about all those bad things I may have done.

Afterparty blends genuinely thought-provoking depictions of growing up, working, and the afterlife with great comedy and fantastically awkward conversations. While technically it has a few hiccups, the story and tone they strike are near flawless.